If you ever go to Croatia, there’s a large chance that you would be visiting Plitviče Lakes National Park. A UNESCO World Heritage Site since 1979, this nearly 300-square kilometer natural park is filled with tumbling waterfalls and clear-as-day lakes which offer plenty of stunning views (and plenty of photo memories to take home).

While in Croatia for vacation in May, I knew that I had to make it to Plitviče (“plit-vee-suh”). I’d looked into public buses from Zagreb, as it would be the closer base I would be staying in, but it turned out that it wouldn’t have worked for me. Between struggling to find accommodation and staying such a short time in Zagreb, I wouldn’t have had much time to go to Plitviče, and let alone make it back to the Croatian capital.

Instead, I happened to have found an organized day tour from Split— while the national park is further away from Split (about a three to four-hour drive), it was the best option, as I had more days in Split to head over. That said, I booked the tour whilst in Dubrovnik, and on my third day in Split took the day trip. My tour group was a small one, consisting of about 11 of us from England, Argentina, Poland, Australia, and the U.S. Our tour guide was a young local who’d just started working in April, but she was incredible guiding us around and showing us Plitviče’s natural beauty. She was also incredibly enthusiastic about making sure that we all had our model-worthy photos of the waterfalls– I usually don’t like taking photos of myself with the places I go to, but she had a point: if you don’t have a photo of yourself at the destination, then how do people know that you’ve really been there?

The drive from Split was a long one, around four hours. We arrived around noon to one of Plitviče’s entrances (Entrance 2, I believe). Unfortunately, the tour didn’t include the entrance fee, so we had to pay extra for the tickets, which was 150 kuna, or around 20€. Not exactly cheap, but it was during shoulder season, as it would cost even more during peak season (for July to August, it’s 180 kuna, or 24€). Definitely worth it, though, as we spent the next 3-4 hours exploring both the Upper and Lower Lakes, taking in dozens of waterfalls– big and small– along the way.

We started at the Lower Lakes, first taking a 10-minute boat ride on lake Kozjak to the other side of the national park to begin our walk around the waterfalls. We passed the Lower Lakes to head directly to the Upper Lakes, so as to avoid the crowds who were starting their tour at the Lower Lakes. Despite shoulder season (and the fact that it was a weekday), there was still a surprising number of visitors all over the national park– the morning wasn’t so bad, but by afternoon it was flooded (figuratively, of course) with people. All the same, it didn’t deter me from seeing and appreciating how beauty the waterfalls were– they certainly live up to the hype! 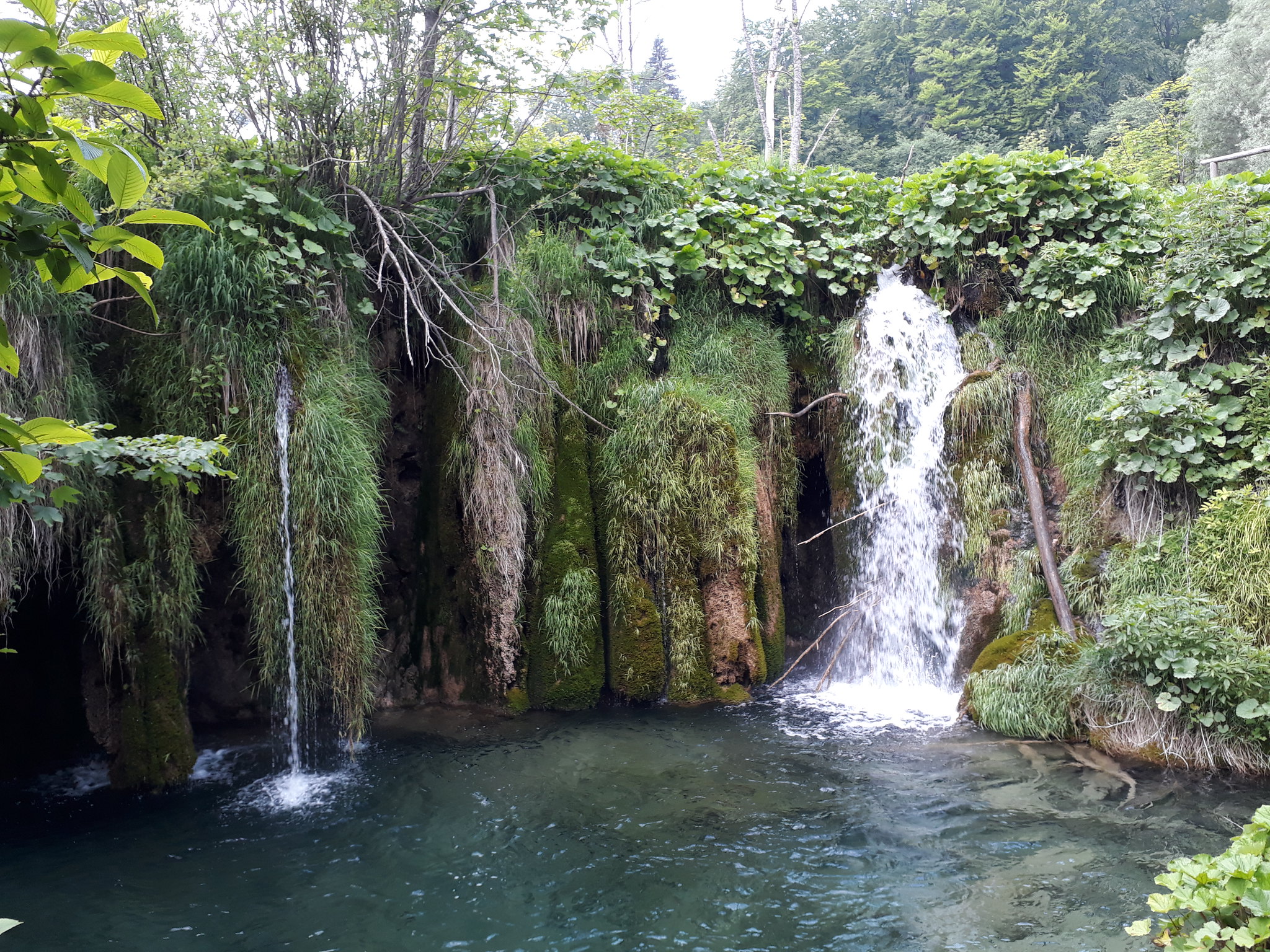 The Upper Lakes were filled with plenty of smaller waterfalls, which were all clustered together and, from the distance, seemed to trickle down like silky hair. The closer you reach them, though, you can actually feel the sheer power of the drop, as a thin layer of mist coats your outer skin. Considering that it was fairly warm that day, a bit of water certainly didn’t hurt! 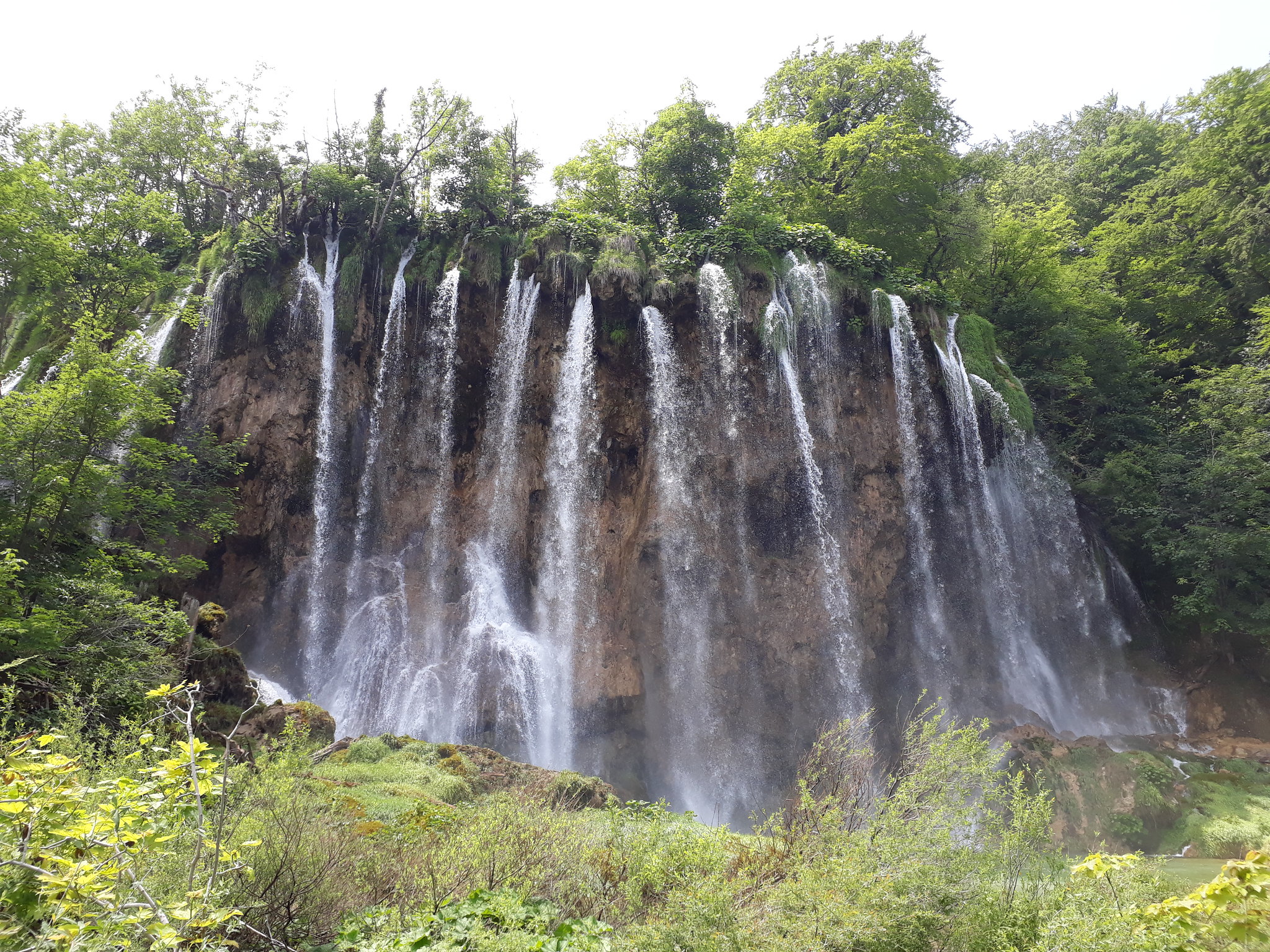 Many of the waterfalls we saw had very matter-of-fact names, such as “Large Waterfall” or “Small Waterfalls,” as translated from Croatian. There were plenty of these notable waterfalls, along with dozens of cascades along the way. The path we took throughout the park’s highlights was very straightforward, as it’s literally a wooden promenade that has either paths A, B, or C (depending on how much you want to see– I believe we took path “B”) to choose from. You really can’t get lost if you stick to the boardwalk– even if you did, you would stumble upon some beautiful gems on the way! 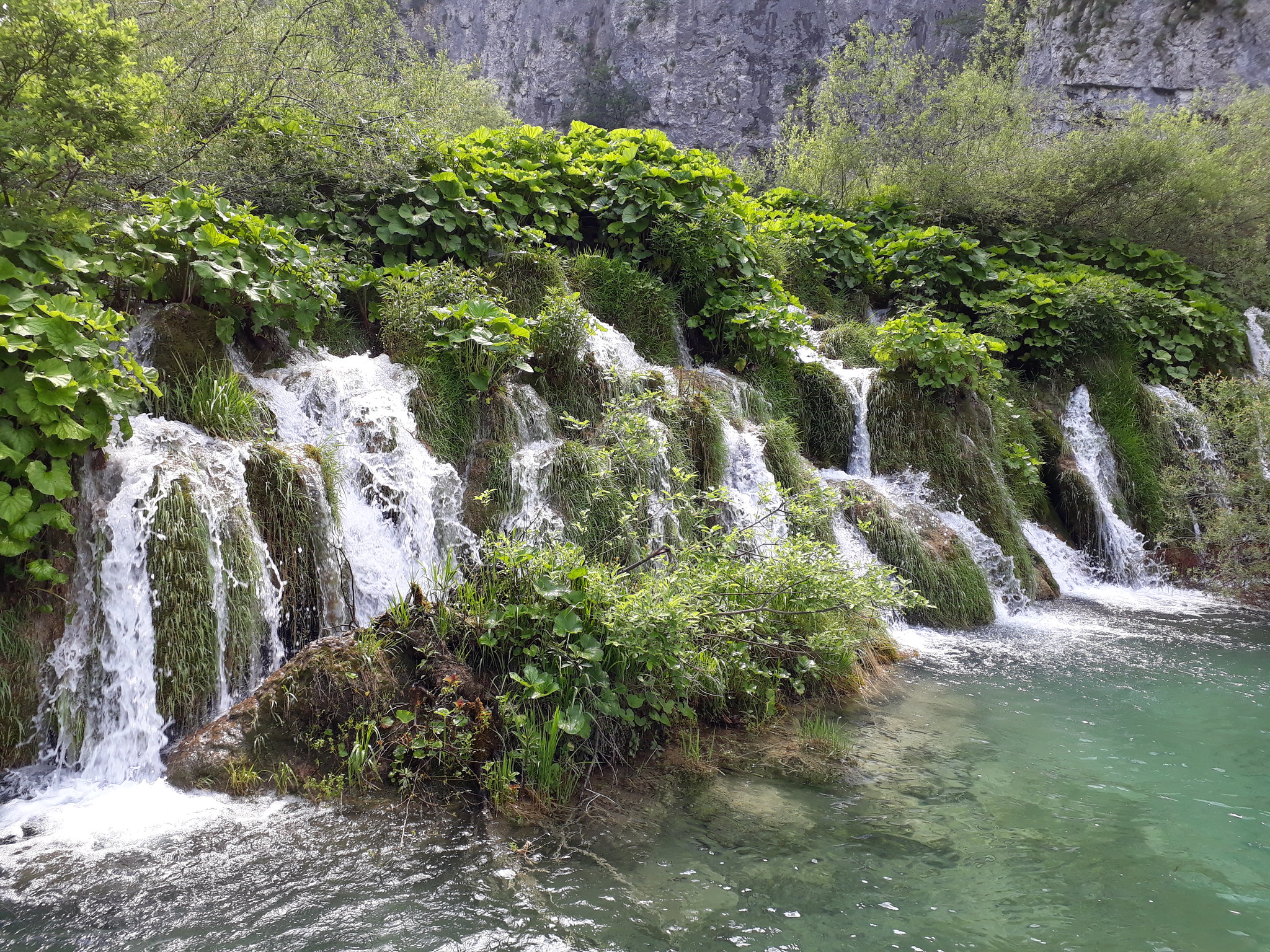 Besides the waterfalls, the lakes themselves were also stunning. As the national park is named “Plitviče Lakes,” the large bodies of water not only were a gorgeous turquoise color, but also incredibly clear. In fact, they were so clear that you could see deep through with fallen tree branches, fish, and other aqua life shaping a seemingly other world below the surface. Our tour guide said that, in order to preserve this crystal-clear water (and park, in general), people are forbidden to swim in the lakes. In addition, should a tree or anything fall into the water, it’s left as-is to let nature “take its course.” As long as it’s not damaging the environment, it’s a good practice to have!

We spent the first half of our visit at the Upper Lakes– after a short snack break at a rest stop, we took the park’s electric train down to the Lower Lakes. From the window, we could get views of the lakes from above, which were quite nice. Soon enough, we arrived at the Lower Lakes where we saw more waterfalls, including the “Large Waterfall,” the highlight of the visit. Tourists were everywhere as we scaled down the steps to the Large Waterfall– it was also a bit slippery, so it was a bit tricky weaving through the crowds while trying not to slip.

We made it to the bottom, where we were rewarded with the massive cascade. Our tour guide took our photos for us, and afterwards, we left to make our way to the exit. We headed up a ramp that zigzagged to the top, which offered stunning views of the Large Waterfall from the distance, as well as part of the Lower Lakes. It was a great end to our visit– we got a late lunch/early dinner at a nearby pit stop before making the long drive back to Split, returning in the early evening.

Granted, much of the day was spent getting to and from the lakes, but it was well-worth it. Given that I was on a time-crunch (and couldn’t afford to stay overnight nearby), the day trip was a good option in the end. Plitviče certainly lived up to my expectations, and I’m glad to have finally visited it. The park is a treasure to see, and it should be on everyone’s list of places to visit should they go to Croatia some day.

Stay tuned for my post on my visit to Mostar, Bosnia & Herzegovina!