Renown for its history, architecture, and numerous canals, Venice is no exception when it comes to being one of the most-enchanting cities in Europe. In fact, it has inspired other places to take after its canals, along with literature and art, thereby making it an iconic city. It’s hard to believe that, with its network of over one hundred islands, Venice manages to keep afloat, especially when it comes to the millions of tourists who visit every year.

It wouldn’t be my first time visiting Venice when I made it over in June– I’d gone almost twelve years prior with my family and just spent one day in town. That said, I wasn’t necessarily dying to return, especially when it’s incredibly small and crowded. All the same, I decided to make it my last stop, as I was coming from the nearby Balkans and found it would be cheaper to fly out from Venice back to Lyon– hence, I booked two nights in a hostel near St. Mark’s Square, and the rest of my time was left up to what I wanted to see and do.

After an eight-hour Flixbus ride from Zagreb (with a brief stopover in Ljubljana), I made it to Venice in the early evening– from the Tronchetto bus terminal, I had to catch a water bus to the center. It was my first time taking the water bus, which I found ingenious and very practical– instead of roads, it’s canals and you get off at anchored stops along the way. A single, one-way ticket is hefty at 7,50€, but it’s the most-efficient way to get around if you don’t want to walk the long distance, let alone getting potentially lost in the canals and numerous bridges.

The ride took about 45 minutes, and I got off at the stop near St. Mark’s Square. It was still about a 15 to 20-minute walk to the hostel, which was located in one of the million alley-like streets. I checked in and dropped off my belongings in a 5-bed dorm before I immediately headed out to get dinner, as it was already pretty late. There were a good handful of restaurants and small eateries near the hostel, so I just chose the nearest one and had my meal there.

The truffle-seafood pasta I got was divine, although the bill afterwards wasn’t so much– having visited Italy numerous times before, I knew that eating the bread and olives on the table would incur extra charges, but I’d also forgotten that service charge wasn’t included, which added another five percent. It was annoying, but with Venice (in general, Italy) being *low-key* expensive to travel to, you can’t do much about it.

I returned to my hostel, where I met three female hostel-goers from the U.S., Australia, even Iran! We chatted a bit before I went to bed, tired after a long day of travel. I woke up early the next morning to catch the ride to Burano, located on one of the numerous islands in and around Venice. I’d gone to Murano, another small island, during my first trip in 2006, and I was keen on seeing its neighbor, Burano.

The ride took perhaps 45 minutes, and I arrived in Burano around 8:30. Being a fisherman’s island, Burano has plenty of seafood to go around: you can even smell the fresh catch when wandering town, along its equally-numerous canals like Venice. What gives Burano its fame, however, is the colorful houses situated along the canals– at just about every twist and turn are the bright, pastel-colored buildings, which makes it any photographer’s head roll. You can bet that many people come for photo-shoots, or at least a snap for their Instagram feed! 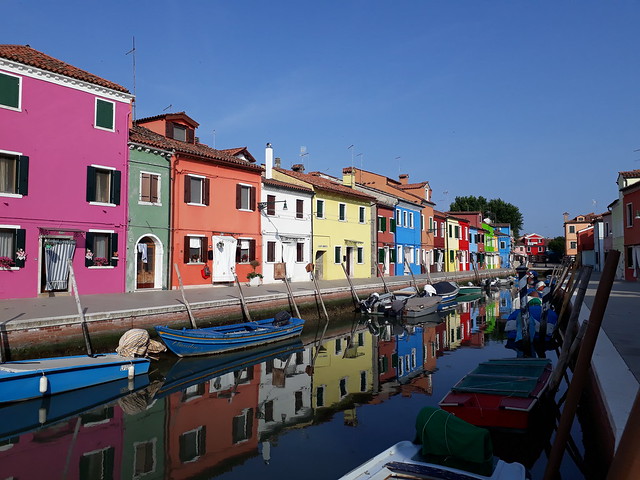 Since I’d gone early, there was virtually no one in town– even the locals hadn’t woken up yet! I pretty much had the place all to myself, as I wandered the canals and took at least a hundred photos of the colorful houses. I also did a tour around the main square before catching the 10:00 water bus back to Venice– hordes of tourists were getting off as I was boarding, and I was glad to have seen Burano when it wasn’t so crowded!

While Burano hadn’t been packed when I visited, Venice was a different story. By the time I returned, the day was in full swing with people everywhere– it was as much of a challenge weaving through the crowds as it was to navigate the canals, which are more confusing than you might’ve imagined! Having Google Maps on hand really helps, so you don’t miss a turn or, even worse, fall into the water!

I spent the rest of my day in Venice, seeing the main sights of town. Whether or not I’d seen them the last time I visited, I don’t remember, but in any case I found the architecture lovely, albeit nothing more. Many of the places required a steep admissions fee to enter, so I ended up not going inside many of the highlights– I didn’t mind, though, as I expected that they wouldn’t be anything new I’d seen, let alone mind-blowing.

However, I did choose to pay about 7€ for a visit of the Teatro la Fenice, which is known to be the place where Italian opera was propelled to fame. I found the theater itself quite nice, but the rest of the rooms extremely underwhelming– that goes to show that paying for anything in Venice just didn’t seem worth it.

After the visit, I headed to St. Mark’s Square, where I just took photos of the eponymous basilica, bell tower, and Doge’s Palace from the outside. Again, I didn’t have the desire to go inside any of these sites, due to price and ridiculously long lines. I ended up strolling along the quay where I treated myself to an Aperol Spritz and some gelato before returning to my hostel to beat the afternoon, June heat.

I went out again in the evening for dinner: I’d looked up places near the hostel that had good ratings, and I came across one just a minute’s walk away. What I didn’t know, however, was that it was a Michelin-starred restaurant, and you can bet that I was surprised when I entered and saw just how posh it was. Although I had a budget, I decided to treat myself a bit, since it was my last night on vacation.

It was my first time dining at a Michelin-starred restaurant, and I have to say that, at least for the restaurant I went to, the food was just all right. Granted, it was sort of an experimental restaurant that incorporated traditional, Italian flavors into its dishes, but I just found the taste okay– the bill came out to just under 50€ for two dishes and a glass of wine, but thankfully, I still went under budget.

As it was nearing 21:00 by the time I finished dinner, I decided to walk over to St. Mark’s Square to catch the sunset– despite daylight fading, plenty of people were still milling about, perhaps to capture the sunset as well. I got some photos in before I headed back to my hostel to turn in for the night, as I would be leaving the next day to return to France. In essence, Venice was lovely in its distinctive architecture, but it merits a mere day (no more than two) to visit– that said, I think one visit is enough to get the jist, and that’s about it.

That concludes my recap of my Iceland-Balkans trip from this May to June. It was a long three weeks (one week in Iceland, two weeks in the Balkans and Venice), but at the same time I was surprised at how I made it through it all, particularly with minimal fatigue. I’ve previously done two-week holidays and experienced burnout through it, but this time wasn’t so bad. Perhaps it was due to the fact that I was visiting so many places that were very different from each other in terms of culture, language, and landmarks, which probably kept me alert and excited from city to city. I also had a much-more generous budget, so I was able to see (and eat!) a lot more, with minimal limitations. Probably my favorite trip to date, and I hope to do something similar around the same time next year.

There’ll be more travel posts to come soon on this blog, so stay tuned!