Known as one of the “New Seven Wonders of the World,” Machu Picchu is certainly a looker. With its terraced citadel that’s surrounded by looming green mountains (including Huayna Picchu) at over 7900 feet (2400 meters), this once demonstrated the power of the Inca Empire, at the peak of its civilization. Today, it’s an incredibly-touristy site for both hikers and photographers alike, offering the famed Inca trail and sweeping aesthetics to remember after the trip’s over.

Machu Picchu was built for nobles, as means of showing the peak of the Inca Empire before it was abandoned in the 16th century due to Spanish conquest. Interestingly, the Spanish never actually made it to the citadel, as it’s quite isolated in the middle of the mountains and difficult to get to. It wasn’t until the late 19th century that a couple of German explorers had arrived, but it was in 1911 that famed American historian-explorer Hiram Bingham came and catapulted Machu Picchu to international fame. Throughout the 20th century until present-day, the site has been both studied and renovated, as means of showing just how Inca civilization was in the 15th century– about 30 percent of the site has been restored, and the project continues on today. 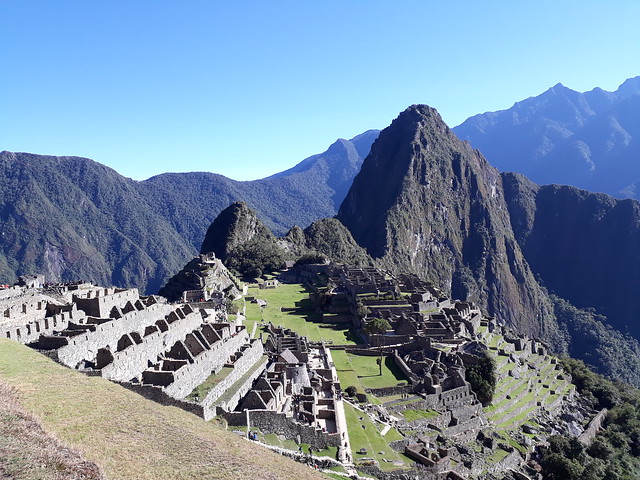 While many backpackers might choose to reach Machu Picchu via the Inca Trail, a four-night hike through the historic Andes region, my family and I didn’t have that much time to do it (let alone the endurance), so we opted for the faster option: along with our tour, we took a 90-minute train ride from Ollantaytambo over, reaching the town of Aguas Calientes where we based our night at the site’s foothills. The train ride was rather rickety as we passed through foggy, but atmospheric mountains, all the while being served complementary food and drink on the way (for train services in Europe, looks like you need to step up your game!).

We reached Aguas Calientes in the early evening, where we checked into our hotel and had dinner before heading right to bed– it’d been a full day of visiting the Sacred Valley of the Incas, and we wanted to rest up before spending another long day touring Machu Picchu.

At 7:30, we checked out and left our hotel to catch the early-morning bus to the entrance of Macchu Picchu. It wasn’t quite packed with tourists yet, which was a relief. The ride took no more than 30 minutes as we climbed up the mountain, getting glimpses of the famed citadel in the distance. Soon enough, we arrived at the entrance where we showed our tour tickets before entering the site.

For next three to four hours, we toured Machu Picchu. From zig-zagging up and down the terraces to checking out the citadel itself, we got a crash course of the site’s history, architecture, and Inca culture, all thanks to our passionate and informative local guide. Of course, we got gorgeous shots of the citadel and Huayna Picchu (basically the iconic photo you see online) while we were at it, and I could see plenty of other tourists doing the same! 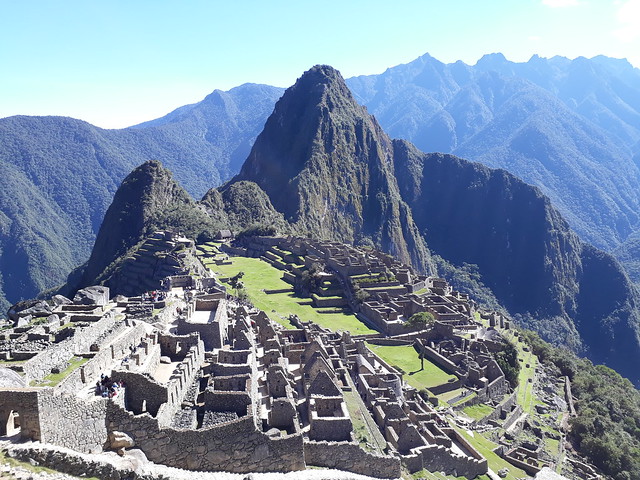 In essence, Machu Picchu had been constructed starting in the late 15th century, as means of reputably being the estate of then-Inca emperor Pachacuti. That said, it was a site of power and richness, as plenty of labor was brought in from all over the empire to help construct this massive project. Considering that it’s in an isolated location, it ended up becoming a sort of small civilization, with its own rules, conduct, and way of life.

Since being abandoned and discovered, Machu Picchu has since drawn over a million visitors per year, or easily 5000 people a day during peak season (May to October). Interestingly enough, we’d gone in July, but it wasn’t overflown with that many people. Our tour guide speculated that less people came this summer to Peru due to the World Cup in Russia– whether this is true or not, it made for less of a congested visit!

After viewing the citadel from the terraces, we headed down to explore the once-flourishing center. We weaved through the narrow ruins, coming across notable monuments such as the Temple of the Sun (aka “Torreon”) and the Temple of the Condor. Many of the stoned compartments we entered used to be houses for the nobles, with large, thin windows that overlooked the sweeping mountainous region.

The sun had been temperate earlier in the morning, but by the time we toured the citadel, it was already in full heat. Our tour guide had told us to apply plenty of sunscreen and cover up, which I did do, but I still ended up getting a horrible sunburn on my forearms in the end– even several months later, it’s still there!

Sometime around noontime, we completed our tour of Machu Picchu. We headed back to the bus stop at the entrance, where we took the shuttle back to Aguas Calientes. By the time we left, the crowds were starting to get bigger, so it was a good thing we left before it became packed! We reached Aguas Calientes where we got lunch and had a couple of hours to wander the markets to shop around. Towards 16:30, we caught our train back to Cusco, thereby ending our brief, but notable visit in Machu Picchu.

All together, it’d been a refreshing experience not only visiting Machu Picchu, but also Peru, in general. Our week in Peru was very different to that in Chile, in terms of sights, environment, and culture, but all the same enriching. Since it’d been my first-ever trip to South America, I’m glad that Chile and Peru had made great impressions on me, to the point that I would like to return to the continent and see more of its countries some day. No two countries are the same, and I want to discover as much of the diversity as possible. Who knows? Perhaps Argentina, Bolivia, and Brazil will be in my travel plans sooner than I know it!

More summer travel adventures to recap in due course– until then!