Nicknamed the “Las Vegas of the Black Sea,” Batumi is a city none other like the rest of Georgia. It’s exceptionally modern, with towering skyscrapers and numerous casinos and nightclubs for tourists to revel in. I would be staying in Batumi for two nights to get a taste of this futuristic, otherworldly-looking city,  especially it being located in a less-traveled country like Georgia.

Batumi is a port city, and it has had a long history of serving as an import-export location for the country, along with Turkey and Eastern Europe. However, it’s also quite young, after experiencing a massive development boom in 2012 with the building of skyscrapers and casinos for tourism. Many of the buildings and sites are new, as I soon discovered while exploring the wide, well-paved roads of the city.

I arrived into Batumi close to midnight, after a long, five-hour drive from Mestia. I checked into my hostel, paid for my stay, and showered before going to bed. My guided tour wouldn’t start until half-past noon, but all the same, I wanted to wake up in the morning to see a bit of the city by myself.

Perhaps I’d set out too early to explore, but many cafes and restaurants weren’t open at 9:00– I soon learned that Georgians are similar to their Mediterranean counterparts (e.g. Italians, Greeks, even Spanish) in that they start work at 10:00, which made me, a natural early bird, a little frustrated with the limited options for breakfast. I did end up finding a cafe open, run by Ukrainians, where I tried varenyky (Ukrainian dumplings) for the first time. Service was warm and friendly, and the food was enough to keep me going for the rest of the morning.

I stopped by Europe Square, where I saw the towering Astronomical Clock and the Statue of Medea in the center. Historically, Georgia has some ties to Greece (especially mythology), so it wasn’t surprising to see the statue in town. I also passed by Theater Square which, of course, had the Batumi Theater. From the square, I could get closer views of the omnipresent Porta Batumi Tower (a hotel) and Alphabet Tower, which features all 33 letters of the Georgian alphabet spiraling to the top. They’re perhaps the two icons of the city, and really innovative in design.

It was then a matter of heading along Batumi Boulevard, cutting through its Botanical Gardens on the way to the pier. There was the distinctive-looking Dancing Fountain in the center of the gardens, which is supposed to represent a dolphin– abstract as it was, it took me a while to wrap my head around it!

For some reason, access to the pier was blocked off from the boulevard. I decided to come back to visit later in the morning, so I headed 30 minutes west to McDonald’s. You might wonder why I would take so much time just to go to McDonald’s but, in fact, this particular one was unique in design. I don’t know exactly what it’s supposed to look like, but it reminds me of some Star Trek-esque spaceship. The interior is pretty cool, too, with displays of carrot heads and plenty of space to seat hundreds of fast food goers. Probably the coolest-looking McDonald’s I’ve been to!

I returned to the city center, spending some time strolling the pier. Although it’s the beach area, it’s not like the sandy shores of LA, which I’m accustomed to. Rather, it’s filled with pebbles, similar to the ones in Normandy. I happened to go on a nice, sunny morning, as the Black Sea was a deep turquoise and calm, which I’m told is rare (as the Black Sea gets its name for being mostly dark and stormy throughout the year). I guess I was lucky, in that respect!

Batumi’s slogan is “the City of Love,” and there was certainly no shortage of that in the sculptures I came across while at the pier. There were perhaps a dozen or so abstract designs of couples engaging in romantic gestures (e.g. holding hands, proposing marriage, etc). I love anything that has to do with architecture and design, so seeing those sculptures were a quirky delight. 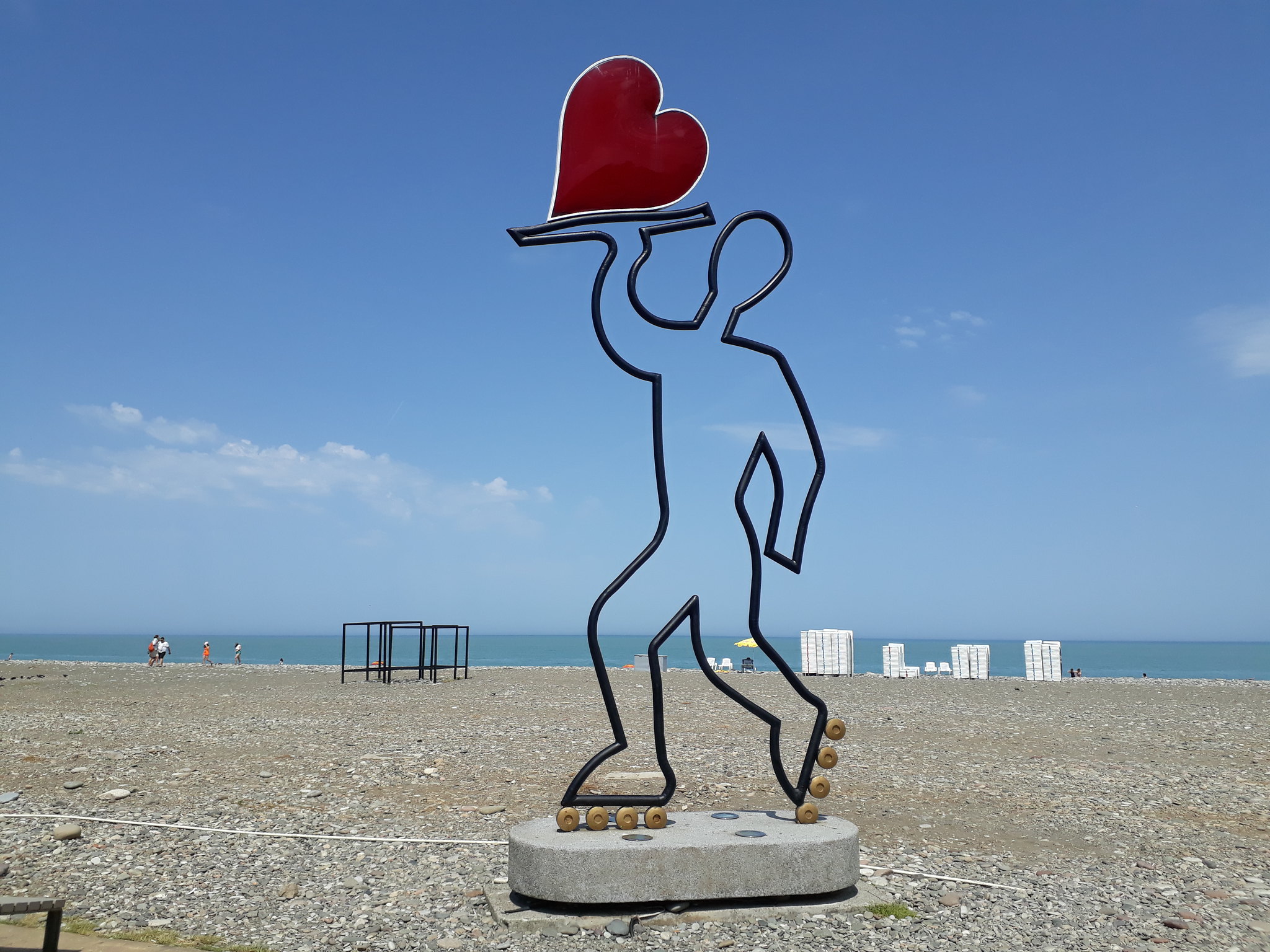 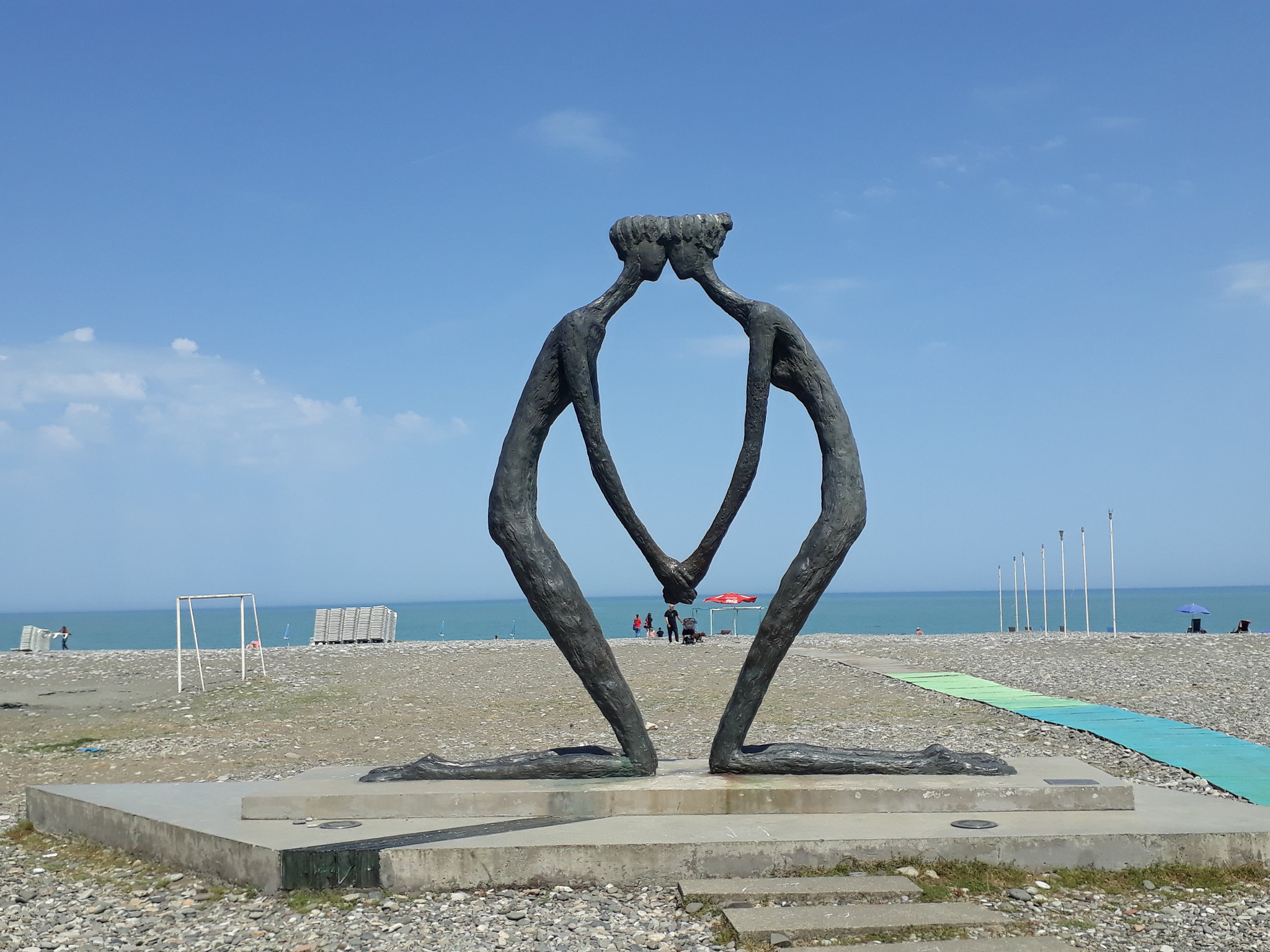 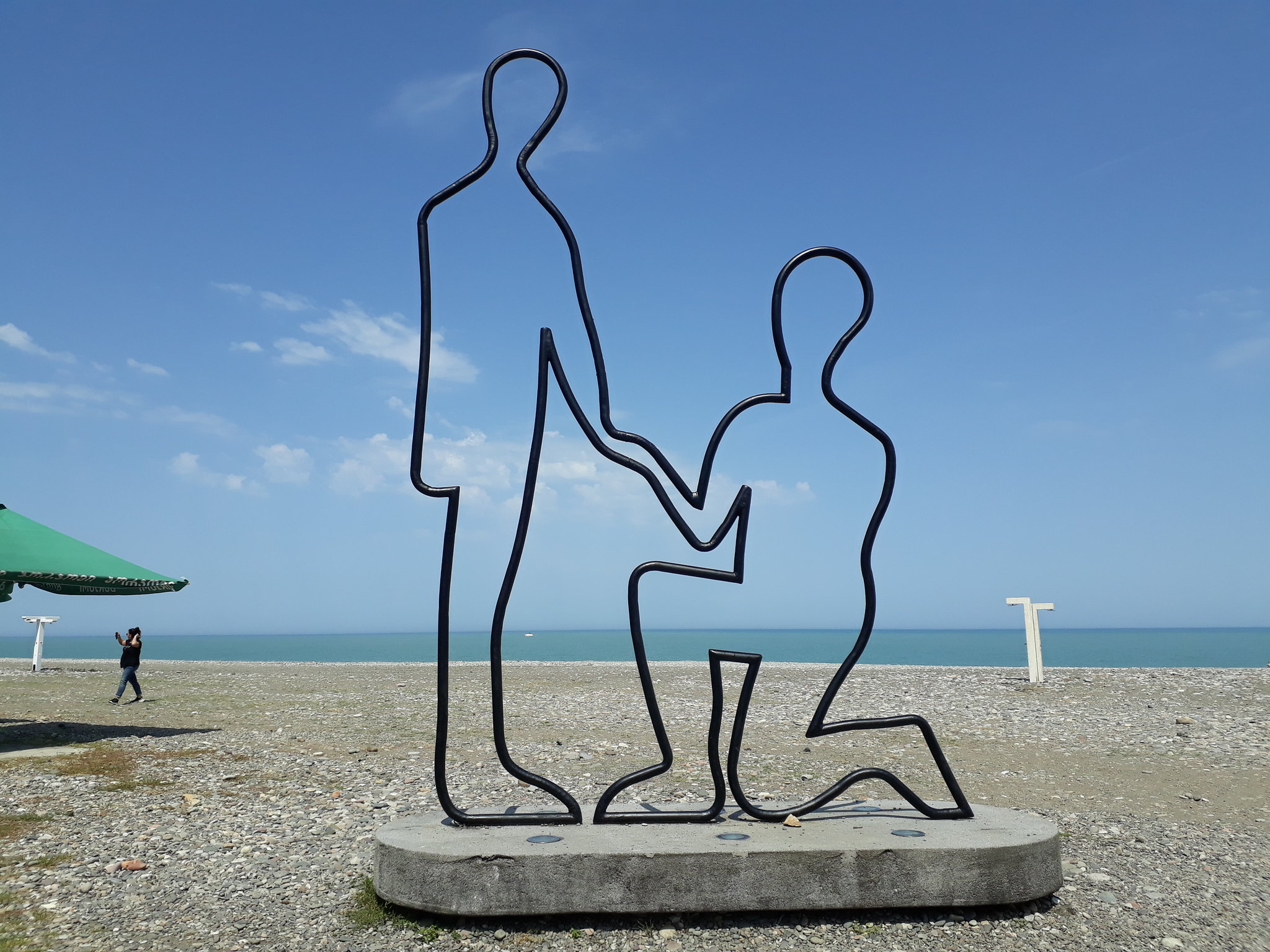 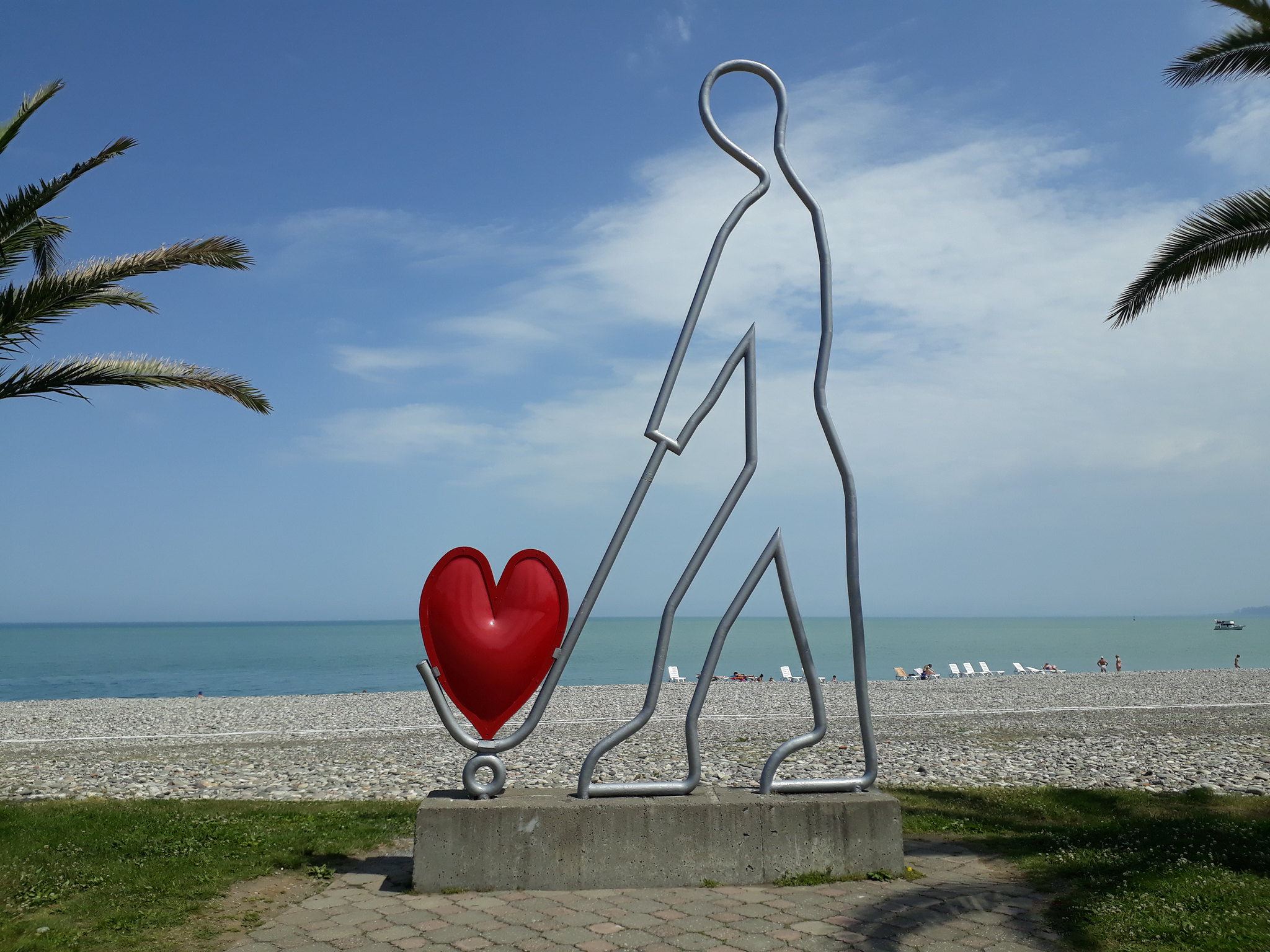 Soon enough, I reached the most-famous “love” sculpture, which was that of Ali and Nino at the heart of the pier. Like the story of Romeo and Juliet, that of Ali and Nino is tragic: it’s of star-crossed lovers born to different families (an Azerbaijani Muslim and Georgian princess, respectively) who can never be united, leading to Ali’s death. The two large, metallic structures which represents the lovers, and they actually move in a circular motion, eventually “uniting” after a 20-minute circuit.

There was also a Ferris Wheel at the pier; I don’t recall ever having rode on one before, so I took the opportunity to take the 20-minute ride on my own. I got sweeping views of the city at the very top, along with the Black Sea and coastline miles out. Especially when I had limited time in town, at least I got to get a bird’s-eye view of it all!

Nearing 12:30, I headed to the meeting point for my guided tour of Batumi. My guide was a friendly college girl who showed me around the places that I’d already seen in the morning (e.g. Europe Square, the pier), but gave in-depth commentary on each site’s significance and history. Again, Batumi hadn’t become a super-modernized city until 2012, so many of the buildings were constructed after that year– that said, not many historical buildings remain in the city center.

Compared with other cities in Georgia, Batumi stands out not just for being incredibly modern, but also one of the most-touristy parts of the country (besides Tbilisi). It gets packed in the summer, for it receives a lot of Turkish tourists coming across the border (Batumi is only 20 kilometers from Turkey). Since Georgia is close to Turkey, it brings up the question of whether it belongs to Europe or Asia– according to many Georgians, they identify as part of Europe, more so culturally than geographically. That said, I consider Georgia to be in Europe, and the most east I’ve been on the continent.

After about an hour or so, my guide and I took her car outside of the city into the Adjarian region, in which Batumi is situated. Having visited the Imereti (Kutaisi) and Svaneti (Mestia) regions, I found Adjara to be notably more humid, and my guide said that it’s the wettest part of Georgia, let alone in the northern hemisphere. In fact, we encountered rain at the end of the tour, after having a bright sunny day earlier in the day.

We reached the Makhuntseti waterfall, the tallest in the region. A few people were bathing and swimming in the pool of water, as means of cooling down from the heat. We then went to the King Tamar Bridge, actually named after the female ruler in the late 12th and early 13th centuries. The bridge was completely made of stone, and surprisingly still standing since the 14th century. Its shape was reminiscent of the Stari Most in Mostar, albeit smaller and older.

The tour concluded with my second wine tasting in Georgia (the first being in Kutaisi). Again, it was at a family-owned winery, although I found it a bit more commercialized than the previous one I’d gone to. The food was still delicious, and I actually enjoyed the wines more: I recall tasting a red, semi-sweet one, and I was absolutely blown away by its intense, peppery flavor. I wish I remembered what it was called, because I would like it again!

After a strong shot of chacha at the meal’s end, we left the winery to return to Batumi, where I was dropped off at my hostel, thereby ending the tour. Overall, I enjoyed my short time in Batumi. As much as I really loved the rural, mountainous backdrop in Svaneti, coming back to a sleek, modern city was, interestingly enough, refreshing. I would’ve loved to have stayed longer to check out its night life and see more on my own– guess it’ll have to wait some day!

I’ll be recapping the last of my time in Georgia in the next post. Coming up: Canyons and Prometheus Cave, Georgia!