Wrapping up my exhausting, but exhilarating time in Georgia, I spent my last full day visiting a handful of canyons and caves in the Imereti region. It was another long day spent driving to and exploring its natural reserves, which were absolutely gorgeous despite the change in weather from earlier in the week (from sunny and hot to cloudy and cool). Even if blue skies weren’t present, I enjoyed the cooler weather while being outdoors!

It was another early rise-and-shine in Batumi, as I took a marshrutka (public taxi-minibus) all the way back to Kutaisi. Marshrutka is one of the more-affordable ways to get around Georgia, especially as a solo traveler. However, they’re known for having crazy drivers, and the stops along the way aren’t clearly demarcated on the road– it was good that my tour had arranged everything for me, so that I didn’t have to worry where exactly to get off (as Kutaisi was the terminus). It was a two-hour and fifteen minute ride in the early morning, and I was soon dropped off in Kutaisi around 9:15.

I met my guide (who was actually same one I had for the Kutaisi walking tour a few days back) at the tour’s office, along with other travelers who would be taking the same tour for the day. Apparently, it was a popular tour, as our group was the largest I’ve encountered in my time in Georgia. We were a group of three Dutch girls, two Croatian guys, two Hungarian girls, a Chinese man, and myself, and we took a guided minibus tour to various parts of the Imereti region.

We started our day at the Sataplia Natural Reserve, which is a canyon where dinosaur footprints can be found. However, due to the surprising number of tourists that day and timed tickets being sold out, we ended up not covering the place– I wasn’t too sad about it, as I wasn’t super interested in viewing dinosaur bones, and the fact we would be seeing more canyons during the day.

What I was the most excited to see was Prometheus Cave. Myth has it that this was the location of where Prometheus himself was chained up to be fed off to the birds, which makes for a cool back story. The cave itself, however, is known for being made of soluble limestone and, with multi-colored lights illuminating inside, makes for a brilliant, technicolor sensation for the eyes. I was especially keen to see the cave and to take plenty of photos of it.

We got our tickets and, along with a large group of noisy Georgian schoolchildren, followed our bilingual guide into the cave. Although Prometheus Cave is a total of 11 kilometers in length, only about two kilometers is accessible to the public. In any case, we went with our guide through the various halls inside, all the while admiring the colors and ominous shadows cast by the limestone. Certainly did not disappoint, and I was pleased to have visited it. 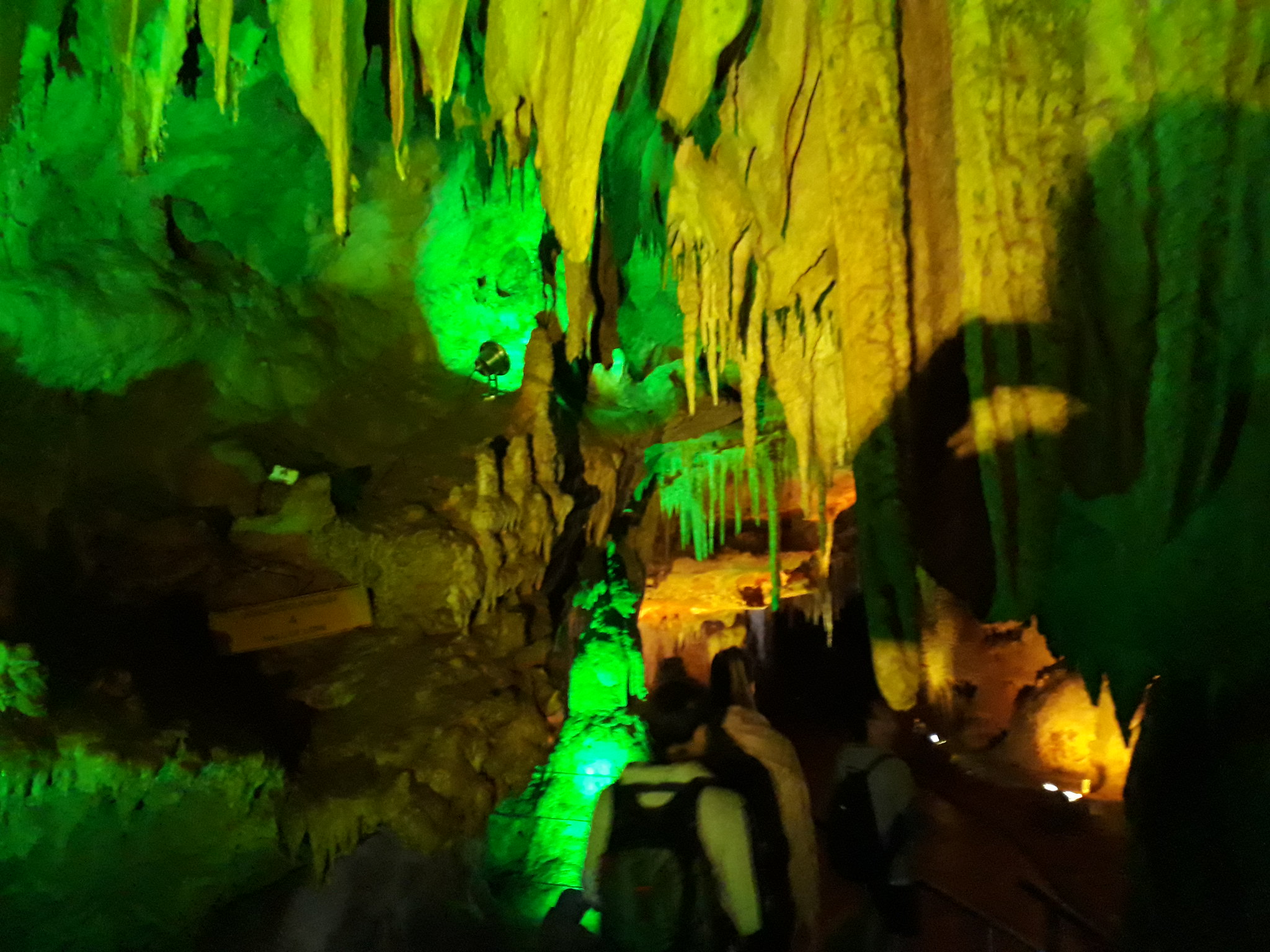 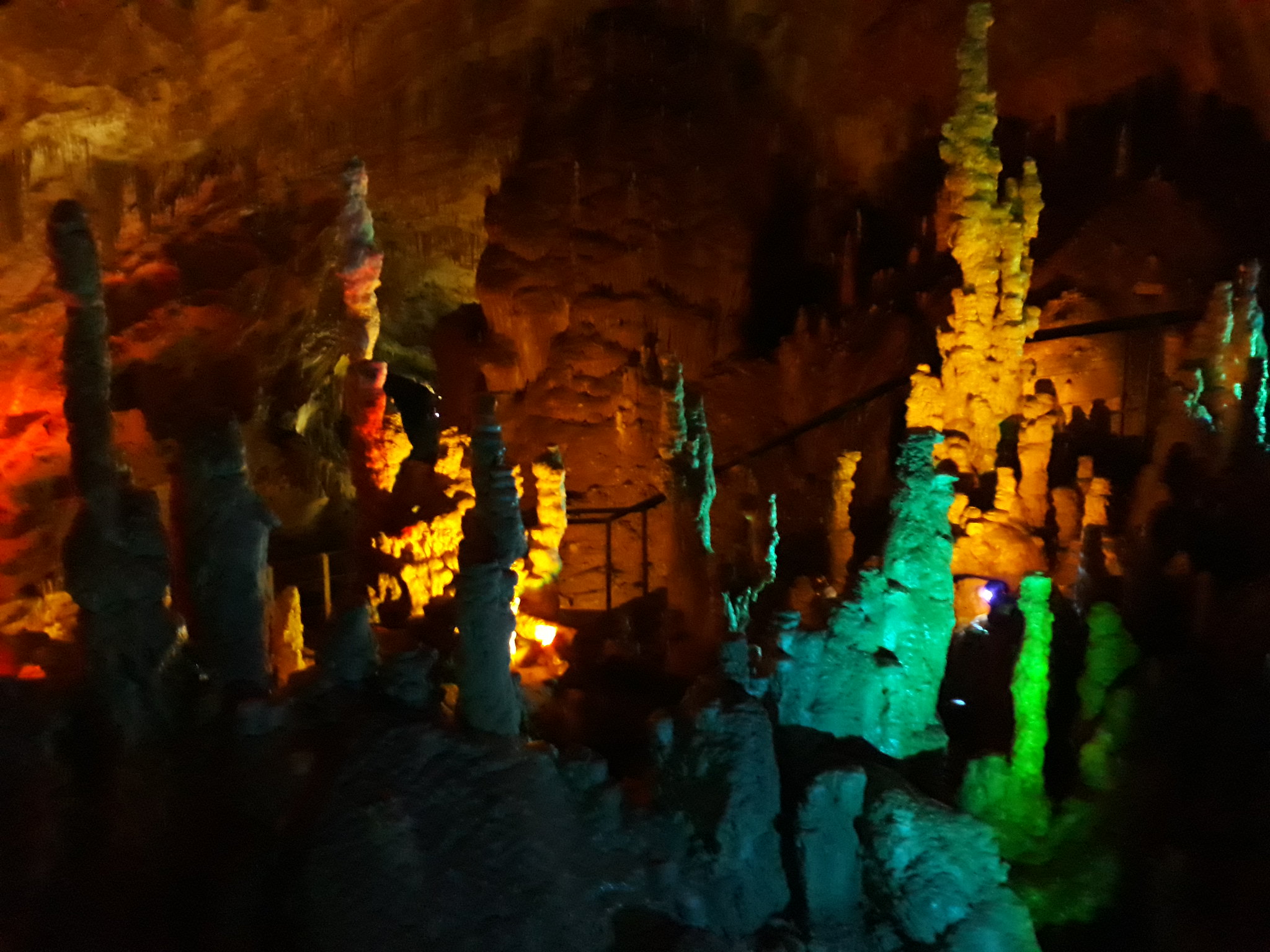 Following Prometheus Cave, we were taken to a small restaurant on the roadside for lunch. I ordered fried potatoes and kharcho, a hearty meat stew that reminded me much of Hungarian goulash. It was enough to keep me going for the afternoon, as they continued to the Martvili canyon for a raft ride along its river. Unfortunately, I’d forgotten to bring my camera for the visit, but I can say that it was beautiful!

In place of the Sataplia Natural Reserve, our guide took us to the Martvili monastery. We took a small *very unstable* cable car ride to the site (and made it safely!) and explored a bit of its grounds, as well as getting forested views of Martvili from the top. Soon after, we headed down and on to our second canyon of the day at Okatse, the deepest in the country. While we had the option of hiking three kilometers, then another two, to the sky walk, all of us weren’t so keen on spending so much time doing that (and a subsequent round-trip of seven kilometers in the late afternoon), so we opted to pay for an off-road taxi down to the base of the two-kilometer walk. It was a bumpy drive over, not too different from the one I did to Ushguli, but again, we made it in one piece to begin our walk.

It was a lot of stairs and suspended bridges, but after about 20 to 30 minutes, we reached the sky walk with sweeping, panoramic views of the entire canyon. Even though it was an overcast day, the views were still green and stunning, and I even saw a small, turquoise waterfall below. It reminded me of Plitviče Lakes in Croatia, but lesser-known and just as lovely, if not more.

We concluded our tour there and headed back to Kutaisi. I had about a 30 to 40-minute break at the tour’s office before I was to meet my driver to head all the way back to Tbilisi. My driver turned out to be the same one who’d taken me to Kutaisi at the start of the trip; along with the three Dutch girls on my tour, we sped off back to Tbilisi in the evening, and I was dropped off at my hostel by 22:00– I would just be resting for the night before I caught my flight back to France early the next day, thereby ending my time in Georgia.

Overall, my six nights in Georgia were a whirlwind– a good one, though! It was a packed schedule of long drives, full-day tours, and more long drives, but I got to see and enjoy many of the sites I visited along the way. Georgia surprised me with its hospitality, diversity of regions and, of course, it’s incredible, plentiful food. I especially liked my time in Mestia and Batumi, and I’d love to spend some time in the Kazbegi region should I return to Georgia some day. Otherwise, I’d return just for the kubdari and eggplants with walnut paste!

Thanks for reading my journey in Georgia, and there will be more travel posts to come soon!