Translated as “Yellow Mountain,” Huangshan is a notable highlight of the southern Anhui province of China. Millions of tourists flock to the region every year to hike its uniquely-shaped mountains and to take in the sublime views from the top. Even for the least-adventurous out there, they would have a hard time refusing to give this place at least a chance, and the reward for the effort is all well-worth it.

Huangshan’s name is reputed to be derived from Huang Di (“The Yellow Emperor”), as the word huang means “yellow” in Chinese. Huang Di is considered a deity in Chinese tradition, and the mountains are thought to be where he ascended to Heaven. The location looks like Heaven itself, as parts of it are high above the clouds that require one not to look up, but rather down at the aerial views of the surrounding summits.

The geology of the mountains dates as far back as over 100 million years. Its distinctive granite peaks are at once sharp and broad, while also being covered by an abundance of native pine trees that can grow an upwards of 1800 metres. Especially when it’s a misty day, the fog partly shrouds the peaks to evoke a mysterious air to the region, as if one is stepping into another world. 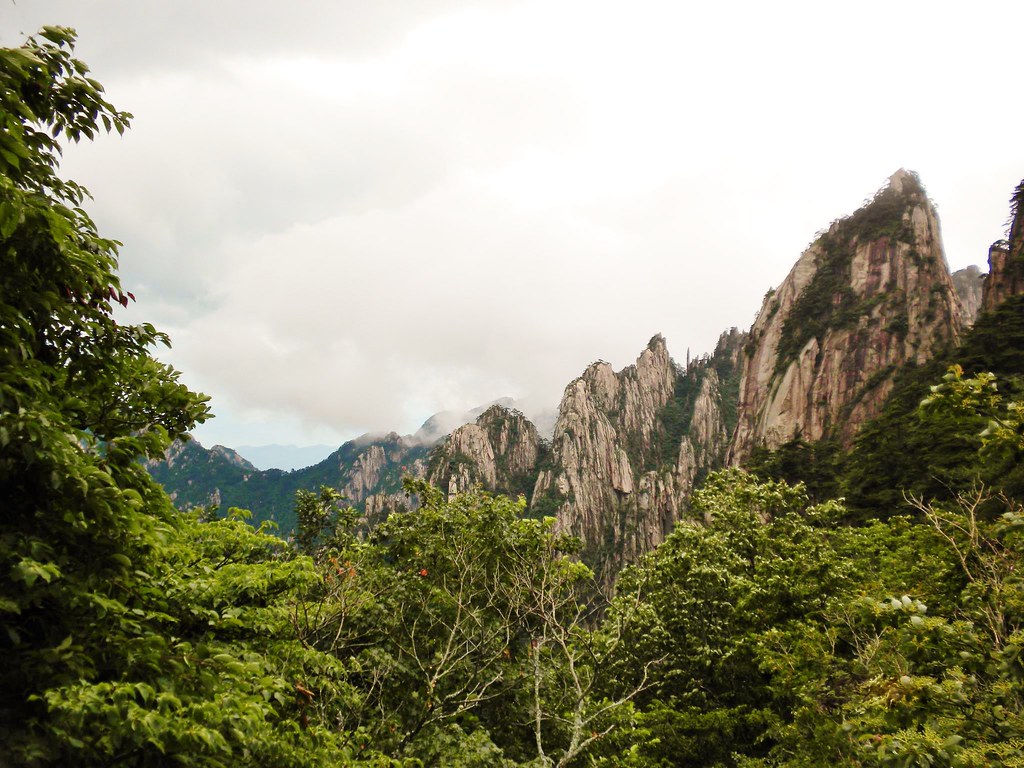 Because of its mystical atmosphere, Huangshan has inspired countless paintings and poems throughout the centuries. It has been made famous in written works of famed Chinese poet, Li Bai, as well as being the inspiration for the scenery in James Cameron’s 2009 film Avatar. While incredibly well-known by the Chinese for its natural tourism, Huangshan isn’t as recognized in the West, but all the same, it’s definitely worth seeing while in the central-south region of China.

My family and I had only one night there, but we made the most out of it. We visited the lovely village of Hongcun and Huangshan City proper for the historical aspects of the region, but our primary reason for visiting was, of course, to hike the mountains. That we did, as we took on two hikes back-to-back for most of our time there. It was exhausting, to say the least, but there were no regrets at all.

After lunch following our visit of Hongcun, we drove to Huangshan City. At the city’s base, we caught a bus over to the cable car, where we took it up to the trail-head of the first hike we would be doing in the mountains. The cable car ride was short, but it offered spectacular, lush views of the vegetation below, as well as the looming peaks in the distance. The views were a great start to our adventure there, and they also got us excited for the hike that was to come.

Upon arriving at the landing, we had a short hike up to our hotel that we would be spending the night in. The temperature was noticeably cooler than at the base, as we were some 1700 to 1800 metres above sea level. It was a refreshing 15°C (60°F) compared with double that at the bottom, and it would make for bearable hikes during our stay there.

We dropped off our belongings at the hotel, and we wasted no time heading back out to begin our first of two hikes in Huangshan. With our local guide, a cheerful man in his twenties, we set off on a two-plus hour hike that would take us up multiple steps carved into the mountains. I was actually amazed at just how accessible the hike was, as I’d been led to believe that we would be braving rugged and uneven trails, perhaps even get a bit dirty along the way. Came as a pleasant surprise, then, that it was all clean, well-defined paths we stayed on, and we stopped at various points to rest and take photos of gorgeous vantage points for posterity’s sake.

Even though it wasn’t a difficult first hike, it still required a lot of climbing. I could definitely feel the onset of soreness in my legs and butt two hours later, and we returned to our hotel to rest for the remainder of the day, as we would tackle another hike the following morning.

Following breakfast the next day, we began our second hike in Huangshan. It took us three hours round-trip, with just as many stairs to climb as we had the previous day. The morning was foggy but cool, with a light, refreshing mist. The air was slightly humid, but it wasn’t too bad as we continued our ascent.

Huangshan is known for three notable peaks, which are the tallest in its mountain range. They’re called Lotus Peak, Brightness Peak, and Celestial Peak, all of which tower past 1800 metres. We reached one of them, Brightness Peak, which is the second tallest at 1860 metres. Unfortunately, it was so foggy at the top that we could barely see the views that it had to offer for us– all the same, we felt accomplished for conquering one of the three famous peaks, and we’d also gotten in a solid workout in the process.

We returned to our hotel, where we packed up to get ready to descend the mountain and back to the base. It started pouring on our way down to the cable car, so we put on our ponchos. I can count the few times I’ve ever worn a poncho, and I don’t think it was very effective against the rain, as the humidity also trapped moisture inside of it. I was very hot and sweaty by the time the rain subside and I was able to remove my poncho. Not the most-pleasant way to end our time in Huangshan, but it was certainly a memorable one!

In my opinion, Huangshan was the highlight of our trip in China second-time around. It was different from our usual city-break kind of tour, as it was focused mostly on nature and hiking. Little did I know that the experience would foreshadow my appreciation for nature travel (especially hiking), which I would end up doing plenty of in the following years to come.

More of my adventures in China coming soon!