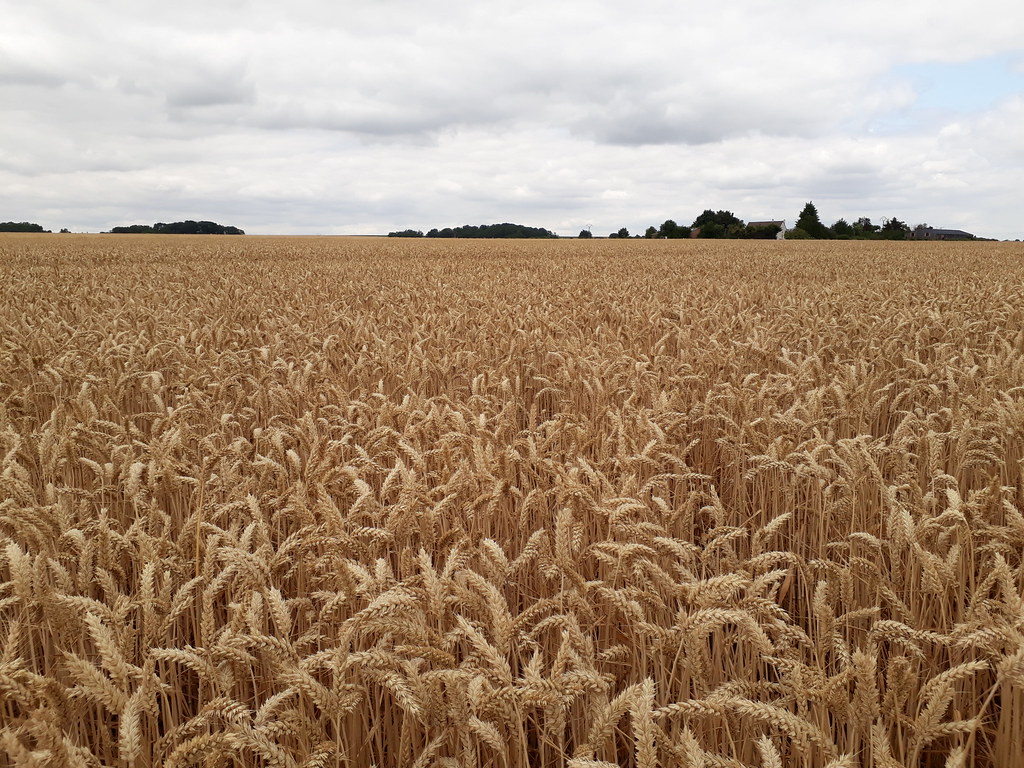 Situated some 27 kilometres (17 miles) northwest of Paris, the small town of Auvers-sur-Oise has a rich history of artists who have lived and painted there. It is most-synonymous with that of Vincent van Gogh, who spent the last few months of his life residing in town, and tourists pay tribute to the famed Dutch painter with a visit every year. Although unassuming, Auvers-sur-Oise is a well-known site in île-de-France, and it’s worth a day trip over while in the region.

As mentioned, Auvers-sur-Oise’s claim to fame is thanks to Vincent van Gogh. Not only did he spent his final two months living and seeking asylum in town, but he also reportedly committed suicide in the wheat fields just outside of the center. It was a tragic death at age 37 for the Dutch painter and today, his legacy remains in the small town. Auvers-sur-Oise has since been transformed into an entire museum itself, dedicating every step van Gogh took during the end of his life to preservation.

While in Paris during le 14 juillet celebrations, I decided to take a day trip to Auvers-sur-Oise. It was a matter of leaving my hostel around 9:00 to hop on the Transilien (a regional train for île-de-France) for a 40-minute ride over to the small town. The train was large, spacious, and clean, which pleasantly-surprised me for it only being one for the region; it also had designs of van Gogh both inside and outside of its surface, as I’d gone during peak tourist season for it to be advertised to visitors at hand. There weren’t too many people on board in the early morning, and it overall was a smooth and quiet ride over.

I promptly hopped off as soon as the train pulled into the Auvers-sur-Oise station, and I made my way to the first destination of my visit for the day. Along the way over, I noticed plenty of small signs indicating that I was in van Gogh territory, including this cute painting outside of a home just across from the train station: 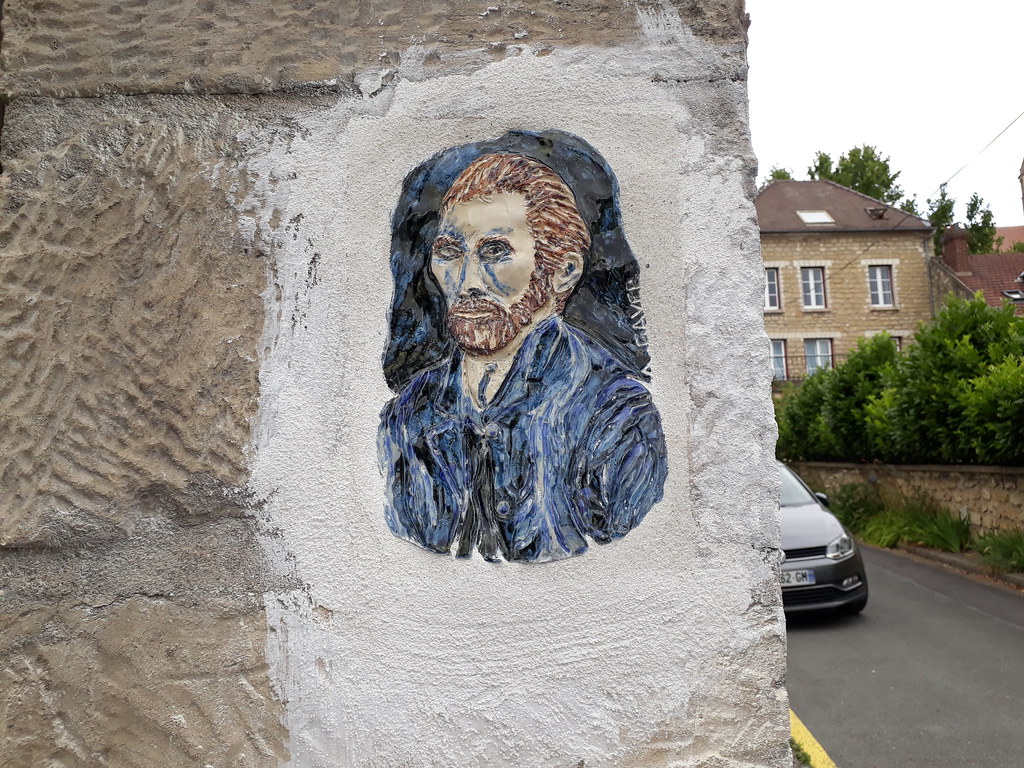 Van Gogh painting on the street.

The first stop was at the église Notre-Dame-de-l’Assomption, a church that sits at a slight elevation just a few blocks away from the town center. While seemingly unassuming, this 11th-century parish church has been made famous by van Gogh himself, through one of his best-known paintings titled The Church at Auvers. 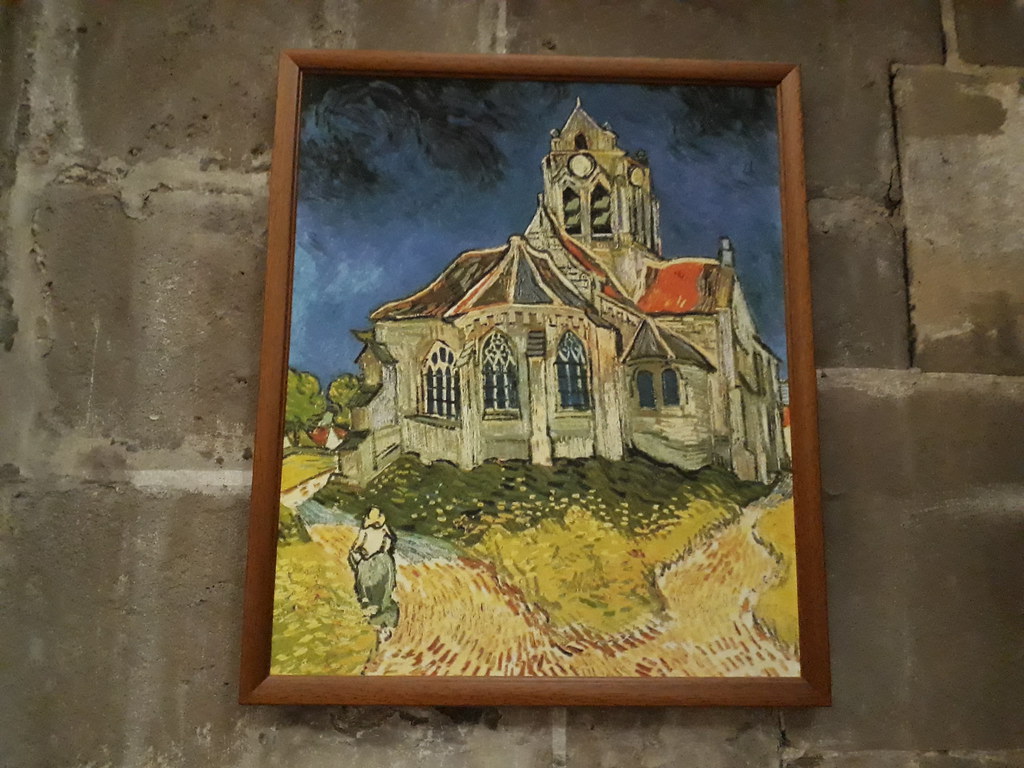 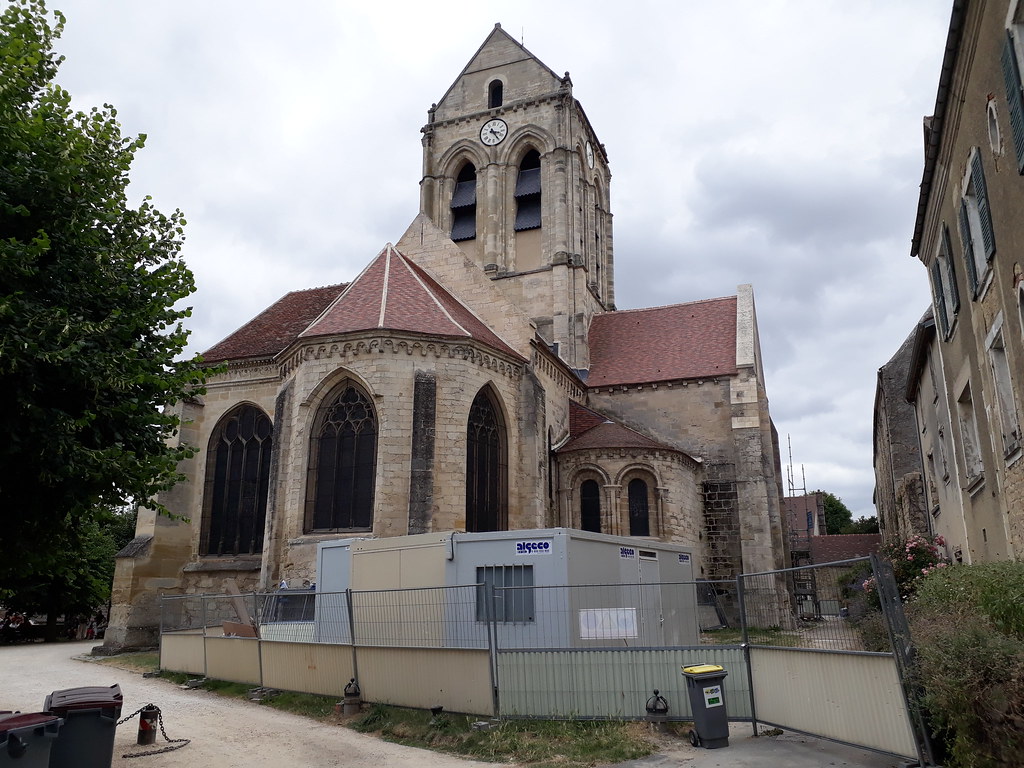 Depicting the church from its front, the painting shows a fork in the road and a lone figure heading left into its entrance. The road is bright and well-lit while the church itself is shrouded in a shadow; the symbolism behind the lighting is that van Gogh, a former evangelical devotee, reflects on his religious past that he’d abandoned. Possibly disillusioned with his time in the church, he paints the building in darkness to show that he’s “shut out” religion since then.

Getting a photo of the church’s exact orientation as portrayed in van Gogh’s painting was tricky, as there happened to be some construction fence blocking part of the shot. Nevertheless, I did the best I could to imitate art in real life, before going inside to visit the nave and relics from the church’s nearly 1000-year-old past, way before the Dutch painter’s himself.

Next was a matter of visiting the wheat fields (champs aux blés) where van Gogh presumably committed suicide with a gunshot to his chest. No witnesses were around to see if he, in fact, had killed himself, but considering that he was alone at the scene, it was likely that he did. Morbid as it sounds, I was fascinated in seeing the place for myself, and to imagine the silence and isolation of the artist before his final minutes of life. 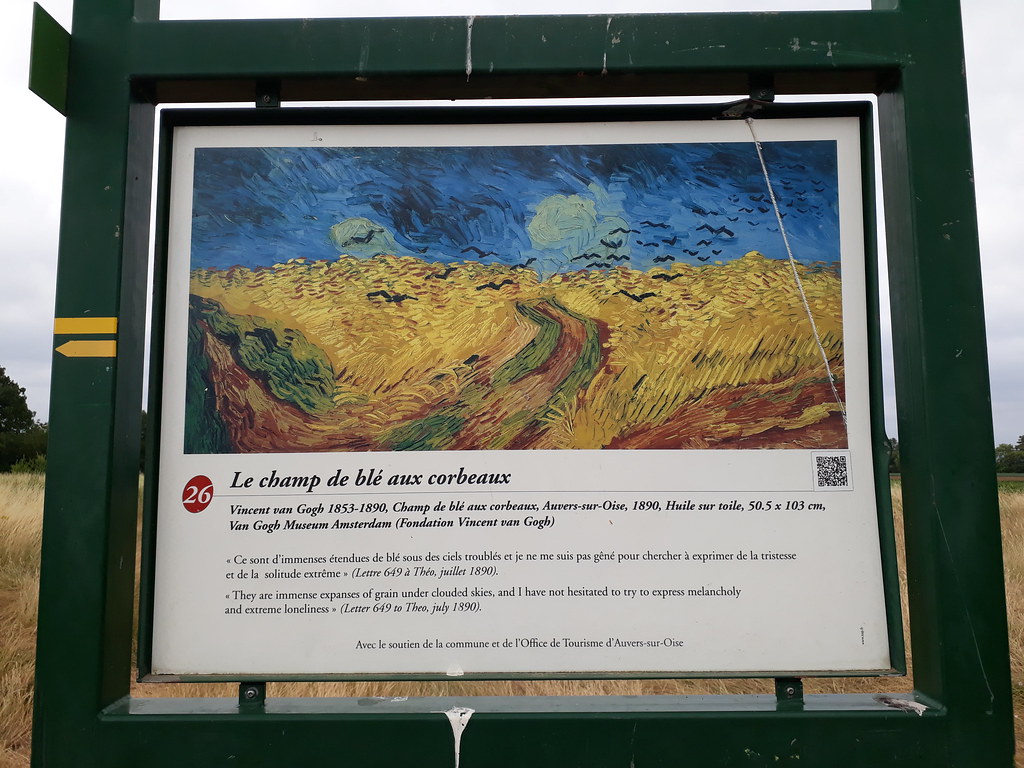 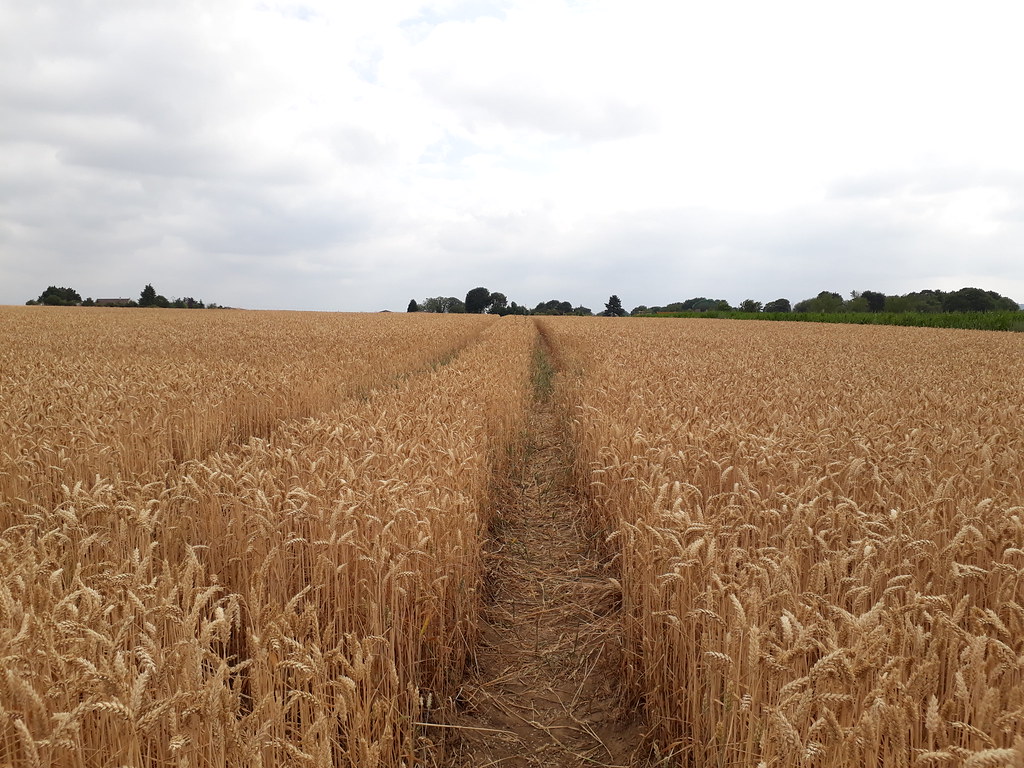 It really was eerie wandering the field, with waist-high wheat rustling in the wind. The sky was unusually overcast for a July morning, yet it added to the somber atmosphere of the golden landscape as I trudged through the dense grass. Van Gogh had also painted a tableau of the fields titled Wheatfield with Crows, with stormy skies and menacing crows that foreshadow the artist’s ultimate death– as well as freedom from his mental illness as the birds fly away into the horizon. My visit to the wheat fields was a peaceful one, although I did feel the haunting effects of their past in the back of my mind.

Just at the base of the wheat fields was the town’s cemetery, in which van Gogh is buried. Next to his grave is his brother, Theodore, who died only six months after him from syphilis. Their tombstones were blooming with lush, green plants that nearly covered their names, as well as a few sunflowers sprouting in front of the artist’s grave. There was a large tour visiting at the same time I entered the cemetery, so I waited until they left to see the tombstones for myself. 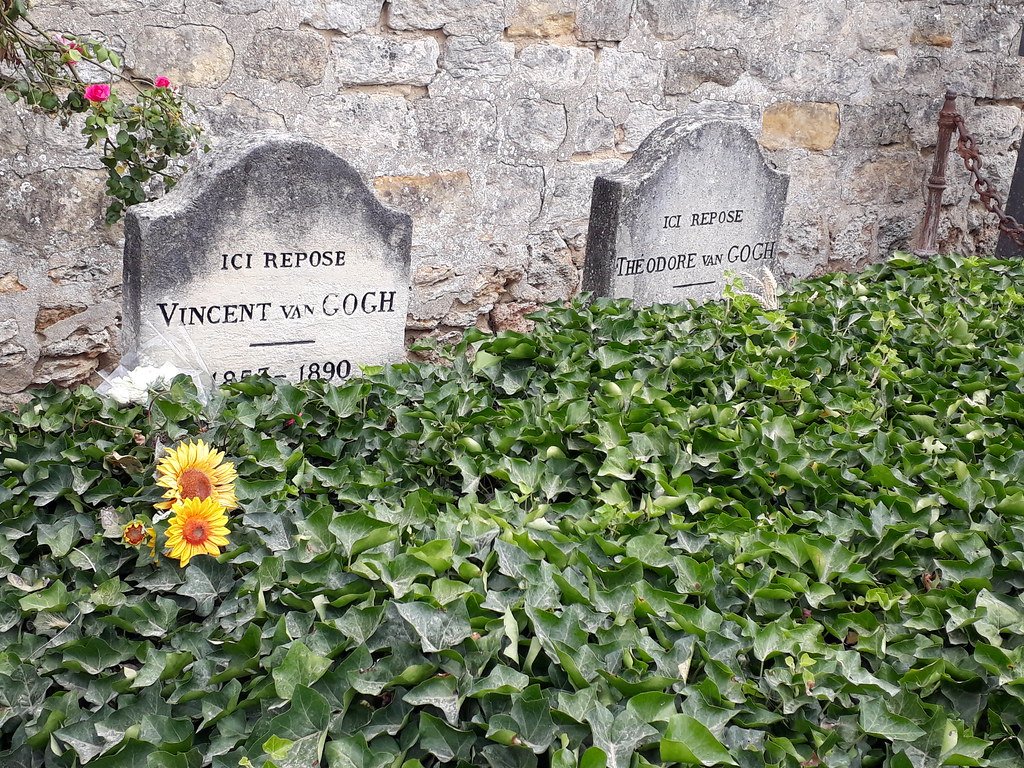 I ventured into the town center afterwards, where I paid 6€ to visit the Auberge Ravoux. This is a historic lodging in which van Gogh rented a room and spent the last two months (specifically, 70 days) of his life living here. He occupied room #5, barely a 10 squared-metre room that resembled something of an attic, or a chambre de bonne. I was given a short tour (in French) of the room and its history with van Gogh; all of the furniture had been taken away over the years, so the space was empty, but it was a matter of imagining the artist still living there and his easel propped up to create one of his greatest works. No photos were allowed inside, so imagine a cramped, wooden room with a slightly-slanted roof and lone window to let light in.

Besides being a museum, the Auberge Ravoux also doubles as a restaurant in which one can have a traditional, three-course French meal. I’d heard that it can get booked out in advance, so I secured my spot a few days prior. In fact, it was quite empty when I went for lunch following my tour of van Gogh’s room, so perhaps I didn’t need the reservation after all.

Fixed-priced menus start at 32€ for three courses, so I decided to treat myself to a glass of white wine while perusing the lunch specials. For l’entrée, I opted for escargots cooked in a cream sauce infused with absinthe (van Gogh’s drink of choice). I love escargots, but I found the absinthe-laden sauce a bit bizarre to the taste– creamy, but with a slight bitterness that threw me off. It wasn’t bad, but it’s not what I’d choose to order again. 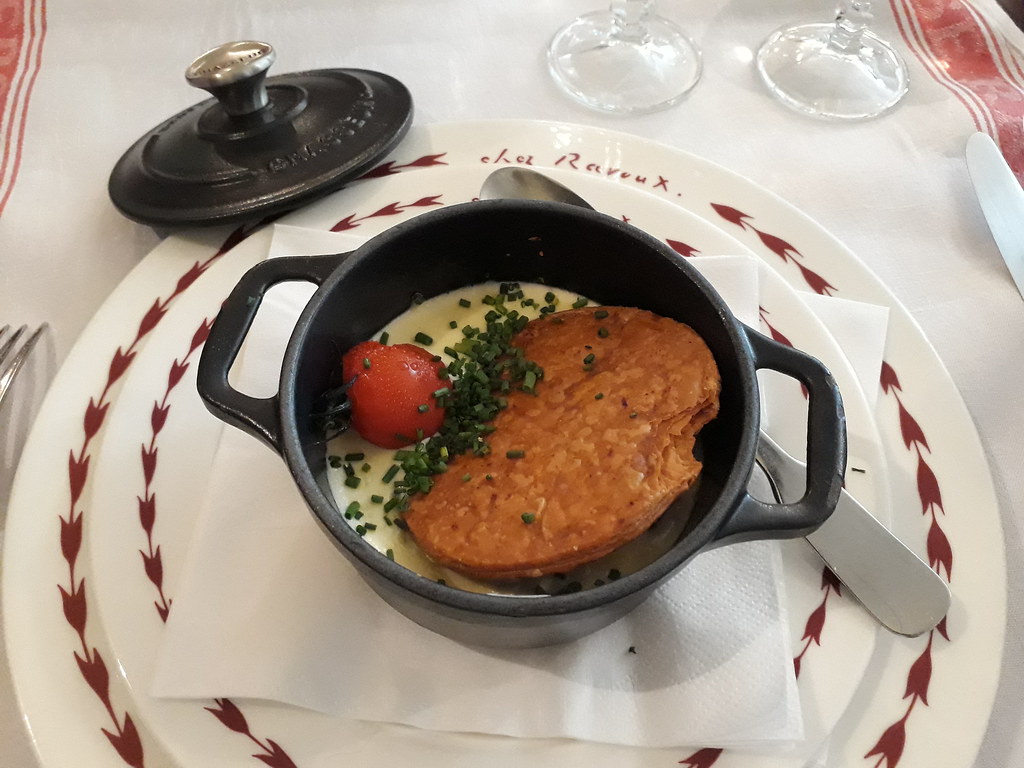 I moved on to the plat principal, which was veal shoulder cooked à la bourguignonne. I’d been familiar with boeuf bourguignon, so having the veal version was a new experience– all the same, it was pretty good. The meat was just a tad dry for my taste, but I enjoyed the crisply-seared outer layer and the tender veal inside. The vegetables were soft and flavorful, and it was a hearty dish to be had. 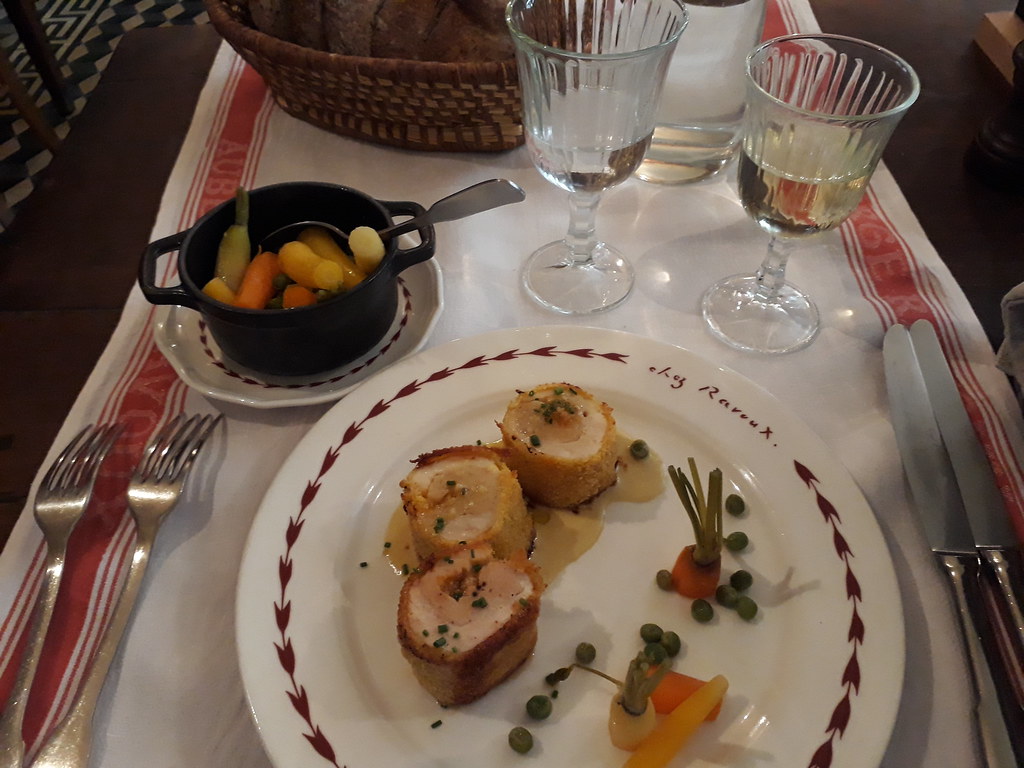 For the dessert, I opted for the craquelin. Resembling a sort of deconstructed mille-feuille, it was a crispy and sticky-sweet thin biscuit that paired well with the slightly-tart seasonal red fruits. While not as hearty as a chocolate mousse or even ice cream, the craquelin was a satisfactory end to my meal at the Auberge Ravoux. 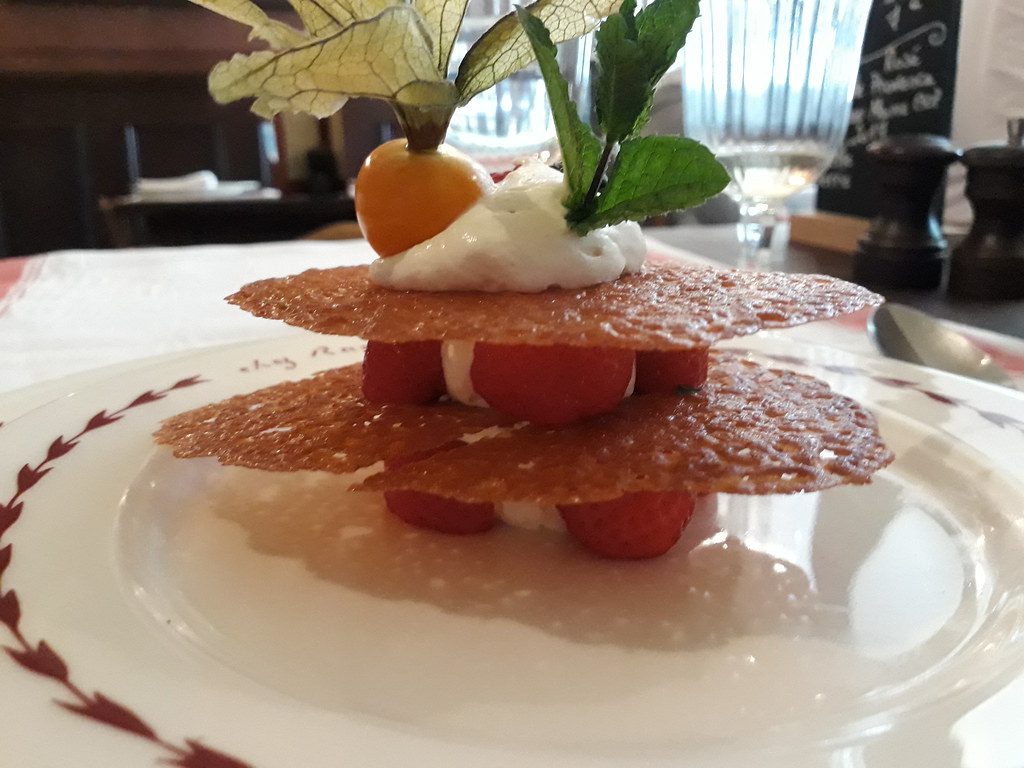 I visited two more spots following lunch. First one was at the château d’Auvers, situated west of town. It was a small, but well-kept estate from the 17th century, and today it houses exhibitions of Impressionist painters who resided in Auvers-sur-Oise, including van Gogh (of course). It’s 12€ full price, although I found it a bit pricey for what one could see inside. However, the exhibitions were pretty cool, as they were large, light shows that reminded me of those at the atelier des Lumières in Paris. I took my time sitting through each of them as they showcased works from Daubigny, Cézanne, and Pissarro. I then took a walk outside in the gardens, with views of the estate down below. 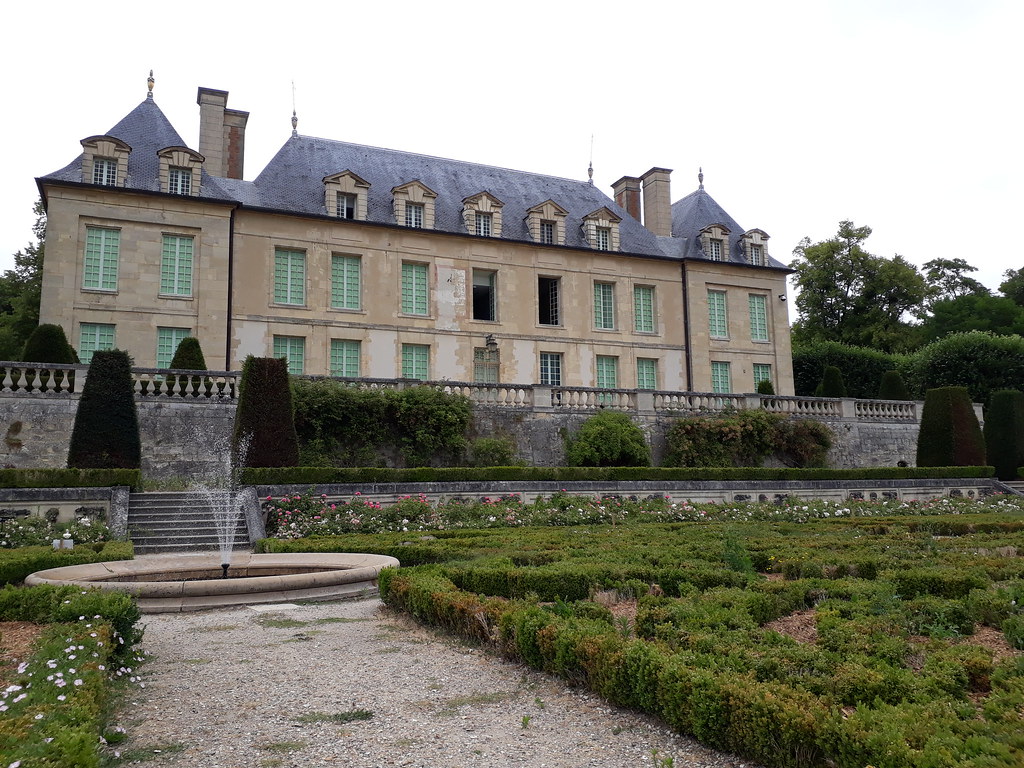 My final stop was at the musée de l’Absinthe, a museum dedicated to the anise-flavored spirit that can make one hallucinate in high doses. I paid 5€ for a self-guided tour of the two-story house-museum, as well as an absinthe tasting. I’d had absinthe before visiting the museum, and although I’m not a fan of the taste (let alone anything anise seed-flavored), I couldn’t object to a complementary tasting and drink in the end! 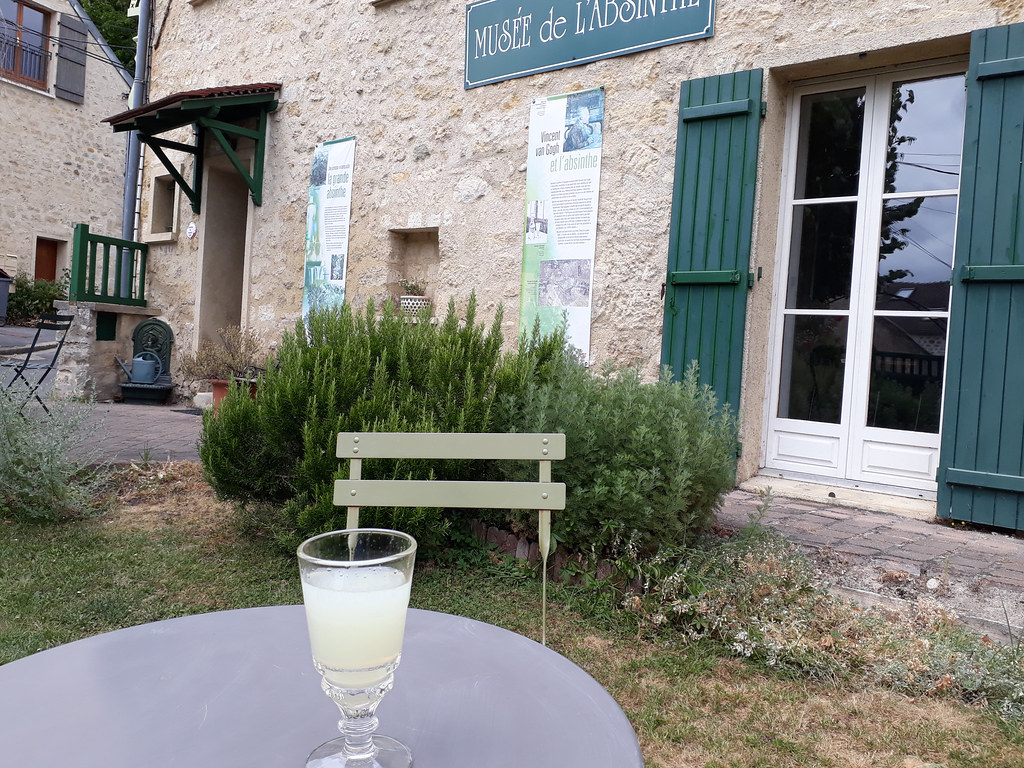 Enjoying absinthe at the museum.

It was then a matter of taking a tour around the wheat fields again before I caught the next train back to Paris. My visit to Auvers-sur-Oise was short, but a tranquil and idle one. I saw a lot of the town, had a nice meal, and learned more about van Gogh’s life. Auvers-sur-Oise was also the final place I visited before I left France (and Europe) for good, so I have bittersweet memories of it. If you’re ever in the Paris area, I definitely would recommend a day trip over!