I lived in the Normandy region of France for two years when I taught abroad. Although it’s not as sought-after as other parts of France for work, Normandy was a place I specifically chose to be in as I was fascinated by its history, particularly D-Day. I was fascinated by the connection that France had with the US, as they’d fought together against Nazi Germany. I was keen to see the place for myself, to see the subtle “American-ness” of my home country in that of France, which ultimately became my second country at heart.

It was almost six months into living in Normandy my first year that I finally ended up going to check out the D-Day Landing Beaches, famous in textbooks and tourism. I went during the last weekend of February with “N,” a fellow assistante; the D-Day beaches were part of an extensive trip we’d planned out, as it was sandwiches between a brief stay in Caen and le-Mont-St-Michel.

We had a wild, four-night adventure of catching trains, buses, and BlaBlaCars from Le Havre to Caen to Bayeux to le-Mont-St-Michel. Getting around wasn’t easy without a car, as public transport can be limited the more rural you went. Also nearly missing our BlaBlaCar to le-Mont-St-Michel and getting stalked by creepy folks at the Caen train station weren’t exactly pleasant… It was stressful at times, but we held each other accountable and managed to make it to our destinations and have fun in the end.

The trip lasted from Friday to the following Monday. However, I actually left on Thursday afternoon, as soon as my last class got out; I’d actually already packed my stuff prior to work that day, so it was just a matter of returning to my flat to grab my belongings and catch the 45-minute bus ride to Le Havre, where I stayed overnight at N’s flat. We caught our BlaBlaCar to Caen the next morning with a chatty French couple, and our conversation with them in Frenglish made the 90-minute ride a breeze.

After being dropped off at the Caen train station, N and I caught the next train over to Bayeux, which was a quick, 30-minute ride. Bayeux would be our gateway to the D-Day Beaches, as buses left every so often to take visitors over. We only had a brief look near the Bayeux train station before we had to leave, so we didn’t truly get to visit the town. A shame, really, because I’ve heard that Bayeux not only was historically-important during WWII (i.e. first major town to be secured by the Allies), but also for its beautiful, 11th-century tapestries depicting William the Conqueror’s victories. I’ll have to return someday to properly visit, for certain!

N and I took bus 70 at noon to Omaha Beach, the closest D-Day Beach from Bayeux. Omaha Beach is also one of the two American landing beaches (the other Utah Beach) and, for the both of us being Americans, it was humbling to arrive on the foreign, yet familiar land on which thousands of lives were lost, over 70 years ago. It was a freezing and windy afternoon in February, yet surprisingly, the ocean remained eerily calm. As if it was a memorial to the over 2000 US soldiers’ lives lost, in the name of democracy and freedom.

I had expected the D-Day Beaches to be littered with remains of cannons, tanks, and other weaponry from the war days, but that wasn’t the case. In fact, the beaches were “cleaned up” following WWII, with the remnants hauled off to be stored at a nearby museum dedicated to the World War. N and I did see plenty of memorials placed proudly along the coast to remind visitors of the past traumas and victories of war. 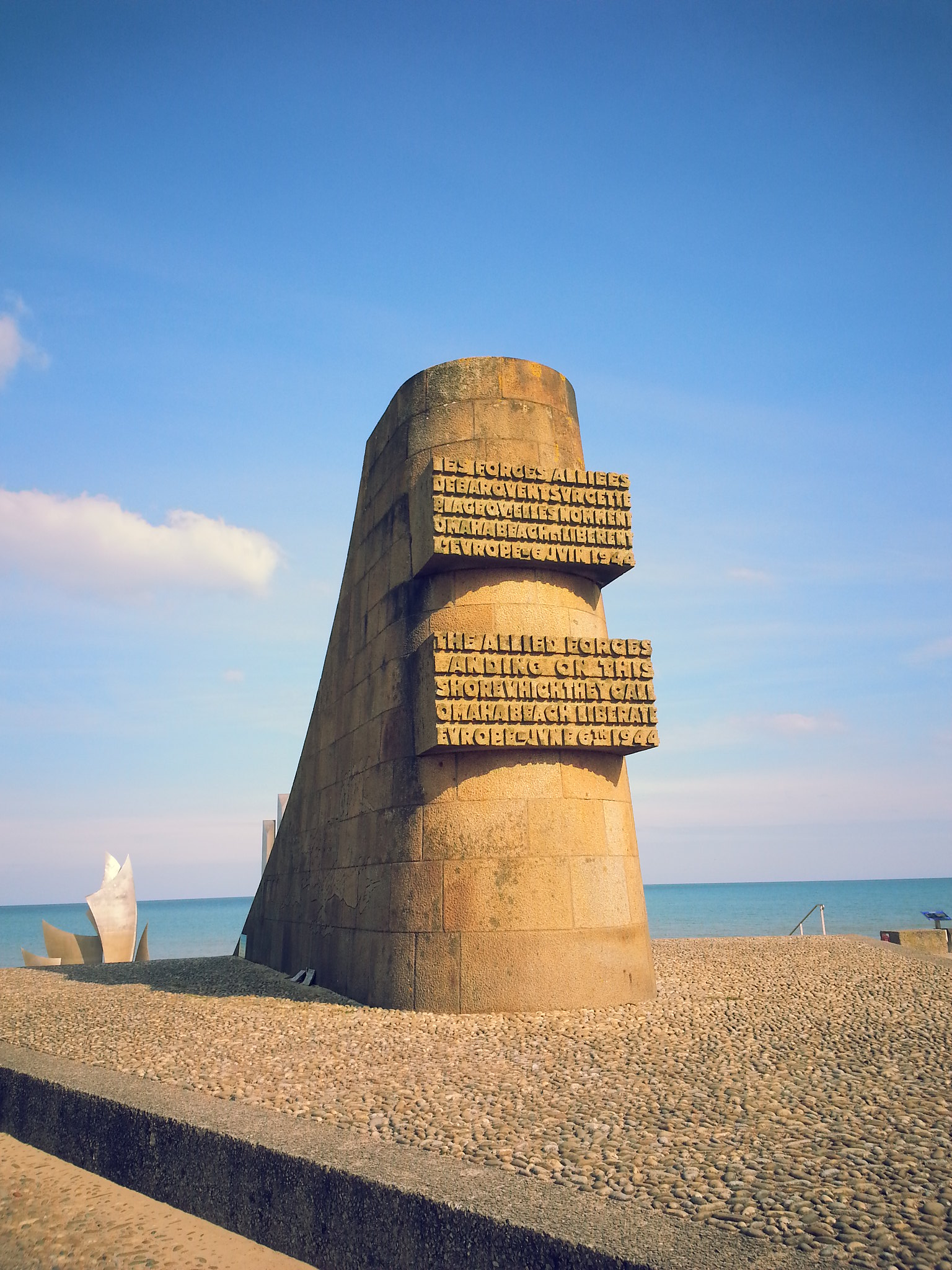 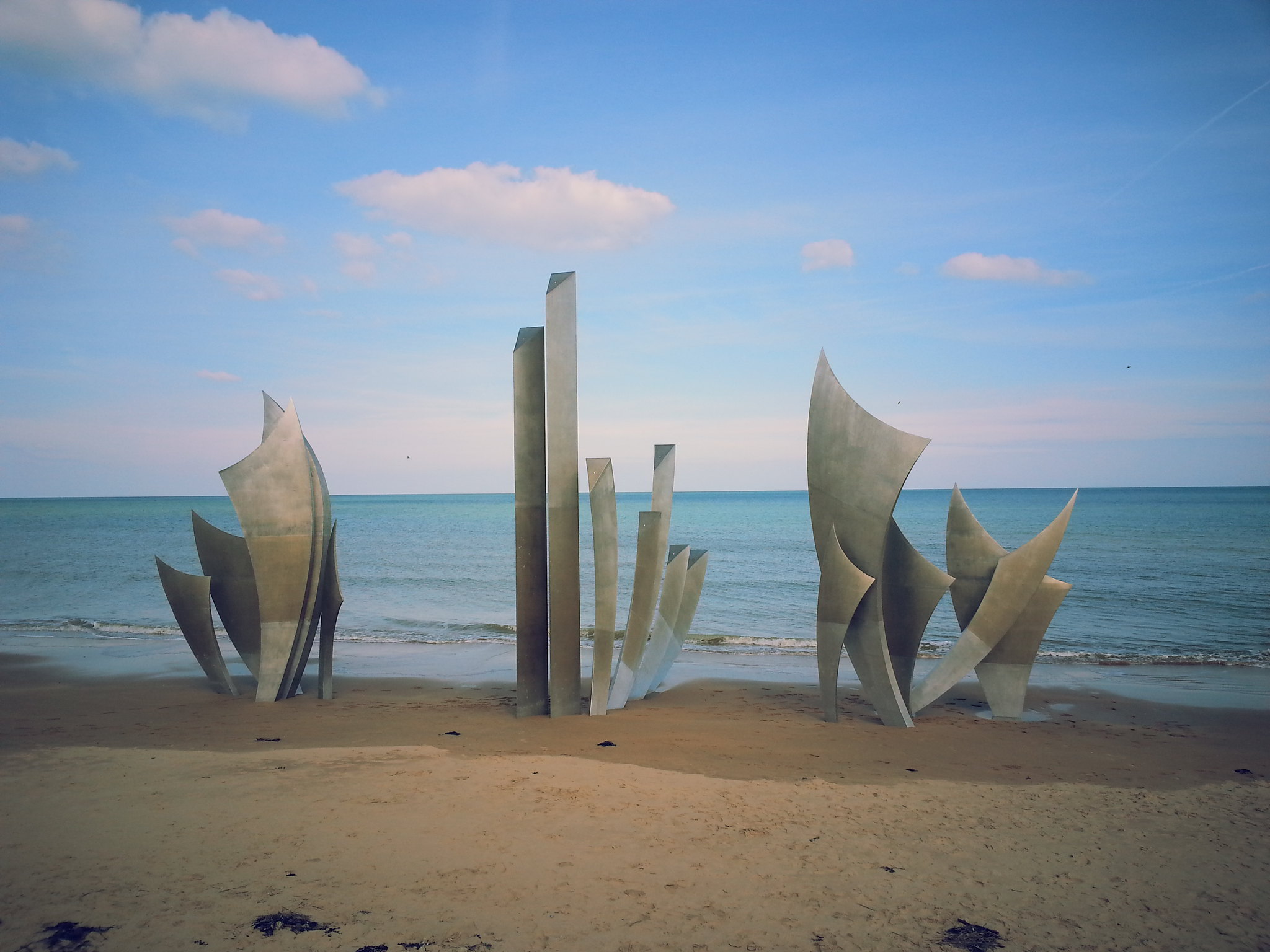 There were other D-Day Beaches to check out besides the American ones, including Gold Beach and Sword Beach for the British and Juno Beach for Canadians. However, they were too far for us to walk to, and we also wanted to check out the Normandy American Cemetery before the sun set. The cemetery was located three kilometres (1.9 miles) from Omaha Beach, so we headed there along the sandy beach, all the while enjoying the beauty of the coastline of the French Northwest. 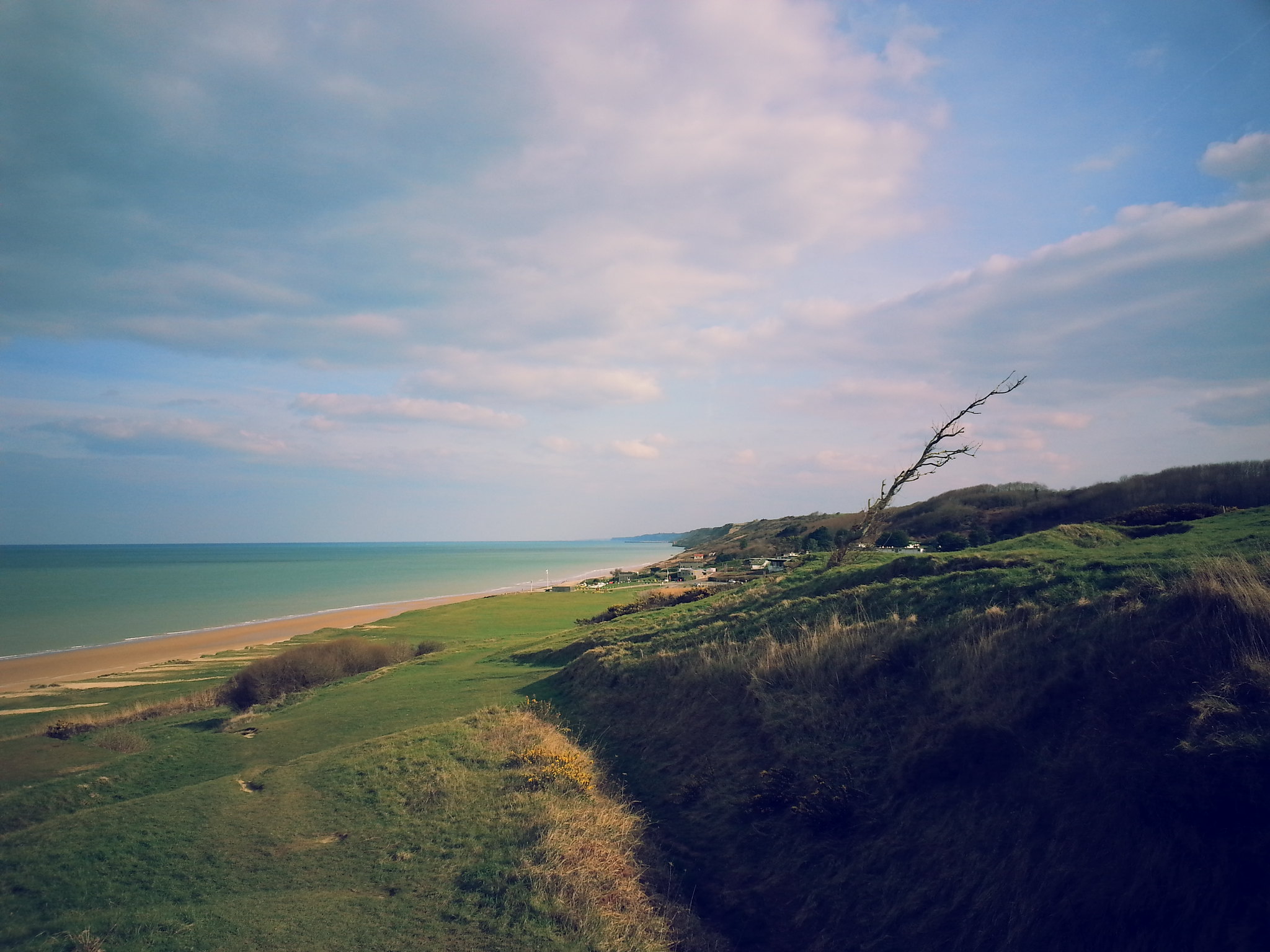 Desolate shores of the D-Day Beaches.

We made it to the Normandy American Cemetery around 16:00. Although we didn’t go inside the actual museum to see its exhibits, we did wander the tombstones of the cemetery outside. Seeing scores of tombstones lined up perfectly side-by-side, with the setting sun in the background, made for a somber atmosphere, as well as reflection on the lives lost. Strange and morbid as it sounds, I believe the soldiers buried in the ground symbolize a return to the beginning, as we started from earth and will end with earth. 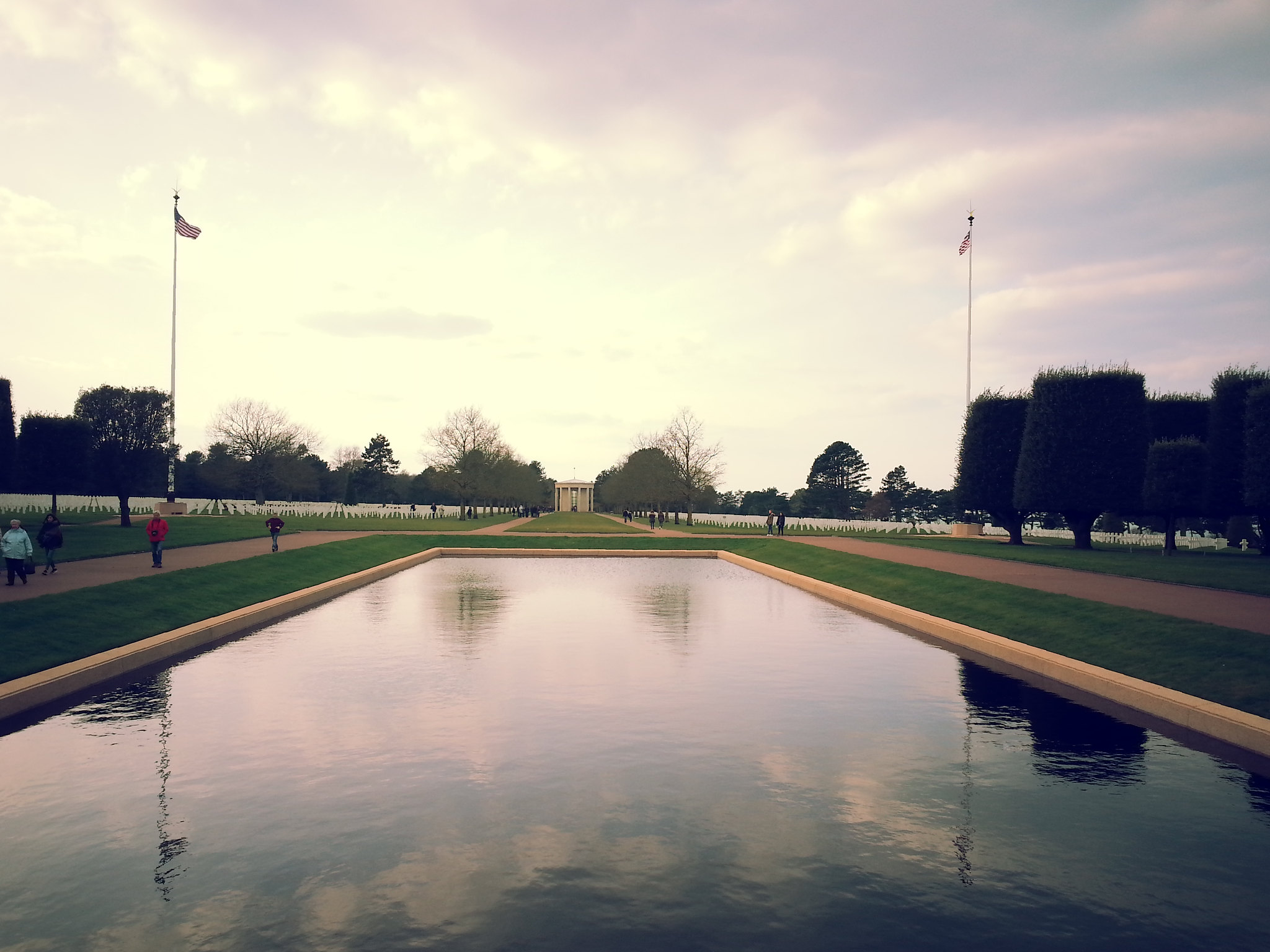 PS The Normandy American Cemetery is actually considered a piece of US territory, as the French have granted this land of 172.5 acres to Americans. So technically, N and I were “back home in the US” for an afternoon!

By 17:00, N and I more-or-less were done for the day, so we returned to Bayeux, then to Caen before catching an evening BlaBlaCar to le-Mont-St-Michel. Our day spent at Omaha Beach and the Normandy American Cemetery was an enriching one, as we got to see the site that’d been so widely-discussed in our history textbooks in school. We were able to be physically-present, and to truly acknowledge the tragedy and triumphs of that fateful day on June 6, 1944 of those who preceded our generation. The D-Day Beaches are worth the trip over. as means of experiencing what it means to fight for something greater than yourself, for somebody else.