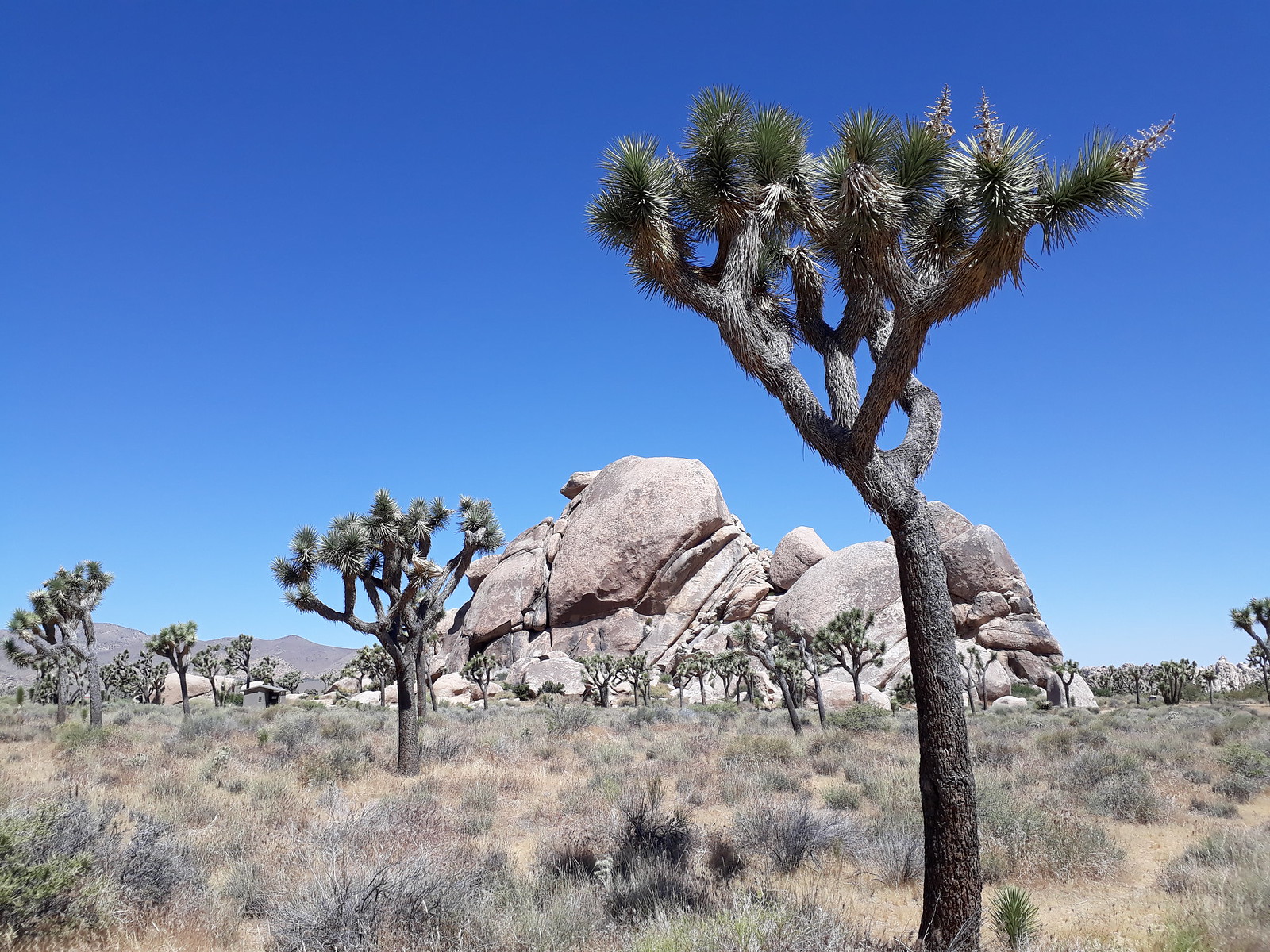 One of the most-distinctive parks in California, Joshua Tree National Park is both an oasis and an adventure, perfect for roughing it up with desert hikes in the day, only to relax and stargaze at night. Millions of tourists, in-state and out-of-state, visit this national park every year to check out the unique topography and, of course, the famous Joshua trees: these peculiar-looking plants are certainly a sight to behold, and they add to the dreamy, almost mystical charm of this dry, desert land.

Joshua Tree was made a national park in 1994, as means of land conservation for the state of California. This national park is enormous, and is in fact larger than the state of Rhode Island! Due to its vast landmass, it’s not a surprise that it encompasses a wide range of varying topography, as well as fauna and flora. Joshua Tree is in part of the Mojave Desert (which is spread throughout much of the southwestern United States), as well as a smaller portion in the Colorado Desert. The iconic Joshua trees tend to be concentrated in the western part of the park, whereas one is bound to see more cacti and palms while visiting the eastern portion. It is common for visitors to spend overnight in Joshua Tree to cover as much of the park as possible, as there’s so much land to cover and to see.

When I visited last June, however, I only had one day to take it all in. My family and I woke up early to be out of the door by 6:00, and to make the two to three-hour drive over from Los Angeles. Despite Joshua Tree being located in California (especially southern California), it was still a long way to get there as we zipped through the freeway, the scenery changing from industrial rigs to Indian casinos to eventual barren desert. Should we have gone further, we would’ve crossed the Arizona border!

After a smooth, 2-hour-and-40-minute drive, we reached the nearest entrance (West Entrance) to the park. My family and I opted for the $80 Annual National Park Pass to get in, which would also allow us to visit other US national parks– otherwise, it would’ve cost us $30 per entrance fee!

Given that we’d arrived early (and the fact that it was on a weekday during the peak of COVID lockdown), Joshua Tree was devoid of other tourists besides ourselves. That said, we had the roads pretty much to ourselves as we drove through the flat desert, peppered with the crooked Joshua trees which seem to lean in towards the road we traversed, as if greeting us. It was already quite warm in the day by 9:00 (low 80°F/27°C), and it would only get hotter as the day wore on.

Our first stop of the trip was at Keys View, a panoramic point where we could view the sweeping Coachella Valley (yes, as the eponymous music festival is named after), the Salton Sea, and Mount Signal. Just past Mount Signal is the US-Mexico border, which is wild to imagine being that close! 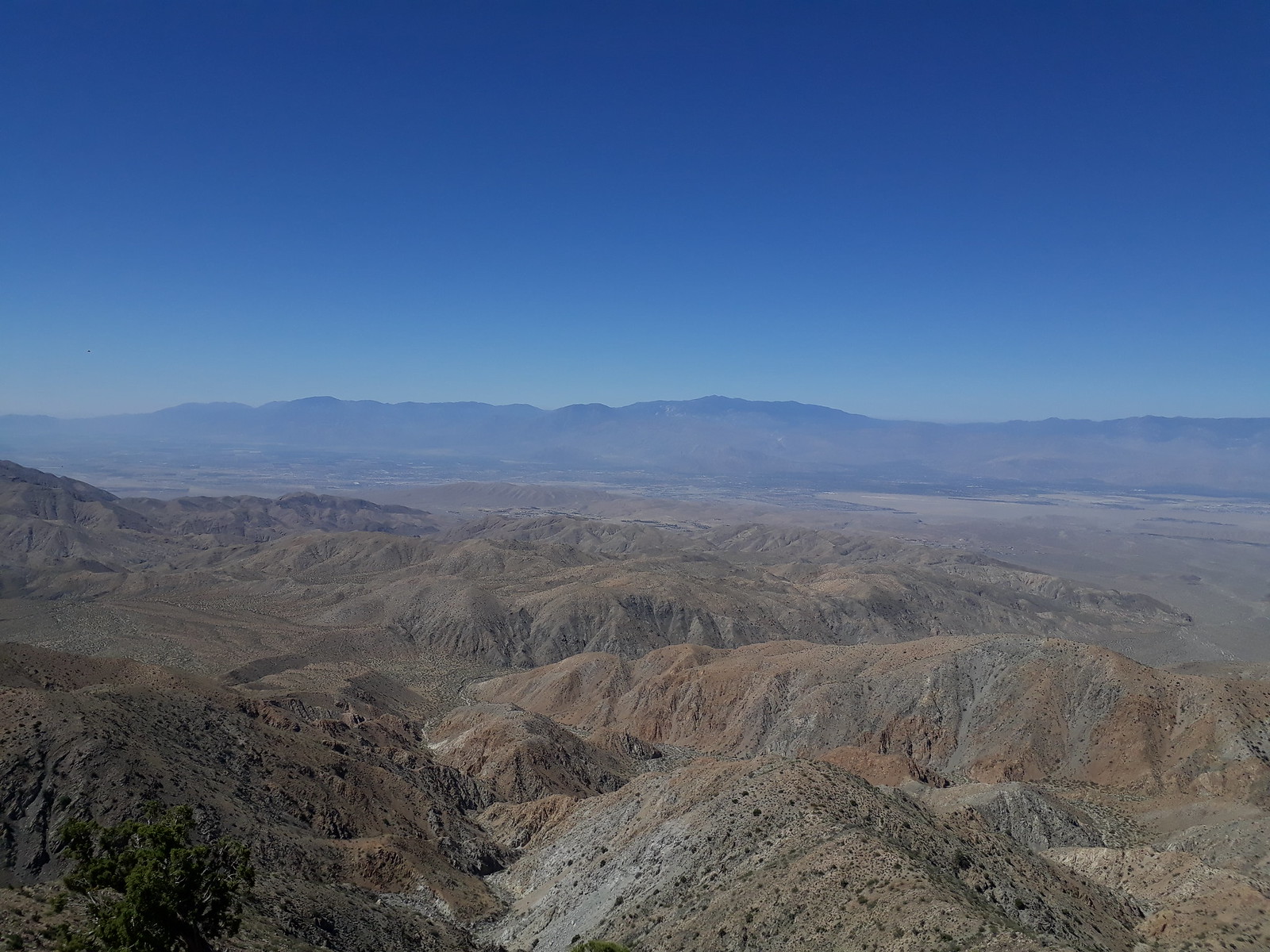 Following Keys View was a drive to Cap Rock, named after a smaller boulder perched on top of a larger one to resemble a “cap.” The view close-up is somewhat underwhelming, but from the distance on the 0.4-mile circuit we took, Cap Rock looked pretty neat. Along with the numerous Joshua trees in the area, it made for some distinctive photography. Fun fact: Joshua trees aren’t actually trees, but instead a variety of the yucca plant. Now you know! 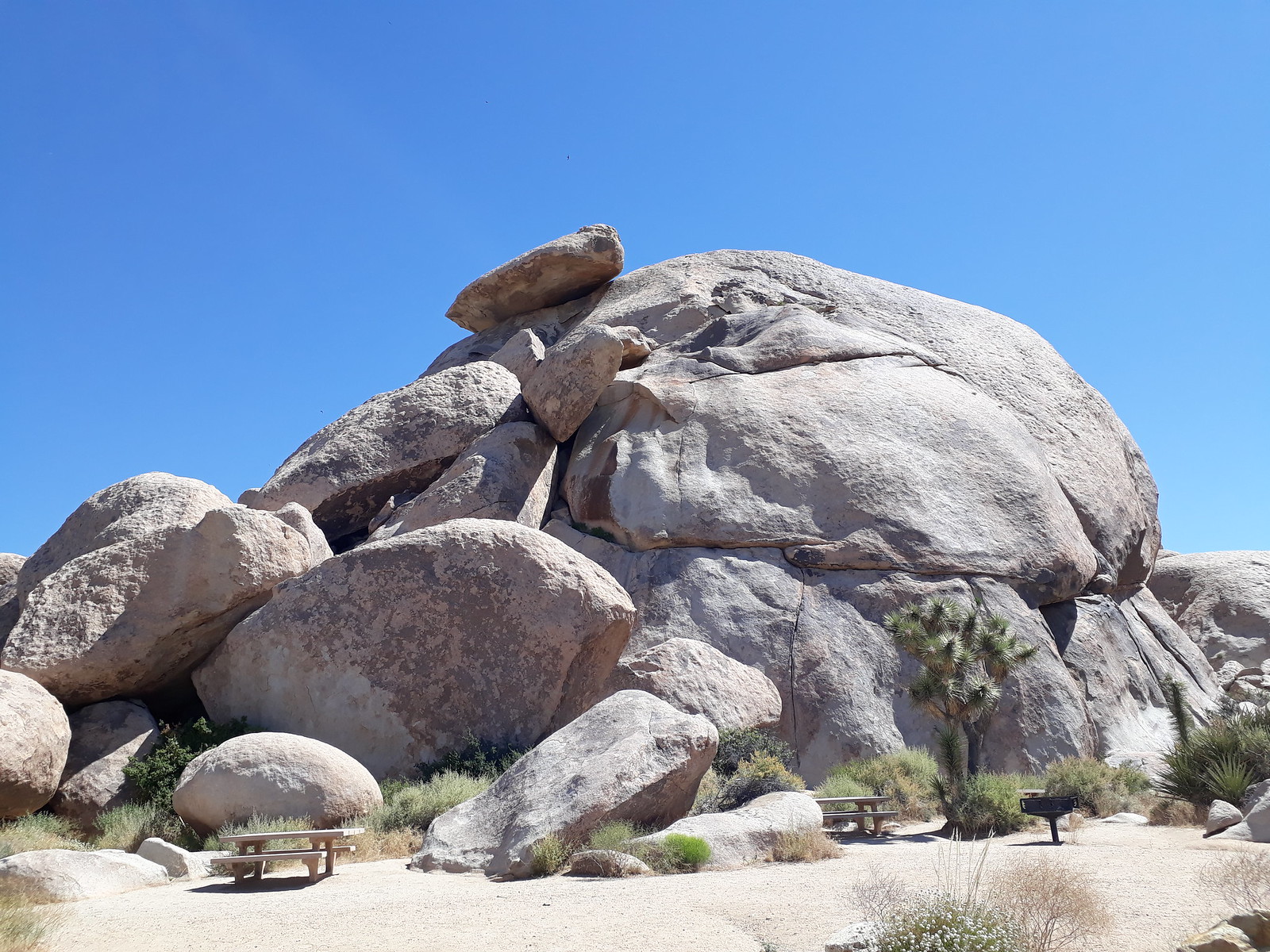 Just before lunch, my family and I headed over to Barker Dam, a small, early 20th-century dam used by cattlemen in that era. We parked at the trailhead and did a one-mile loop through the rocky terrain to reach the dam, only to find that it was all dried up! During rainy season, there’s plenty of water in the reservoir for a lovely sight, but as it was summer and rainless, there was unfortunately not much to see. There were also apparently some petroglyphs in the surrounding area, but we weren’t able to find them. All the same, we did spot some cool plants and small wildlife roaming around. 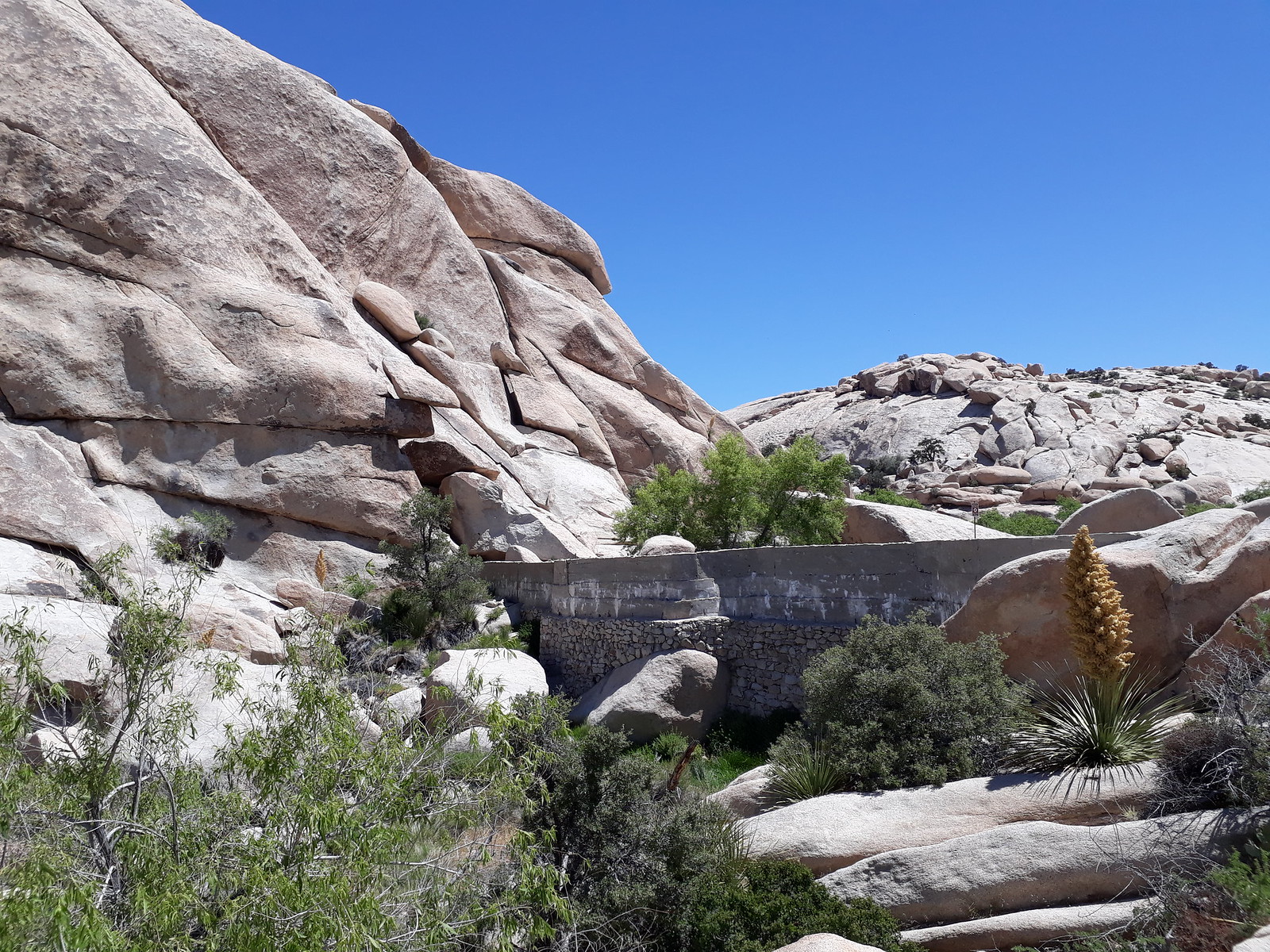 We then headed over to Jumbo Rocks, where I’d read had a unique rock formation called “Penguin Rock,” shaped in the black-and-white bird itself. Despite hiking for a good 20 minutes (albeit sans directions), we couldn’t find it and ended up returning to the car for a lunch break before continuing with our day. Any case, there were plenty of “jumbo” rocks to marvel at!

Our lackluster hikes at the previous two locations were made up for at our next destination, Skull Rock. Not only was the trek over a mere 0.15 miles, but it also wielded a towering, impressive formation shaped in, of course, a skull. It is one of the main sites to see in Joshua Tree, and very much worth it. 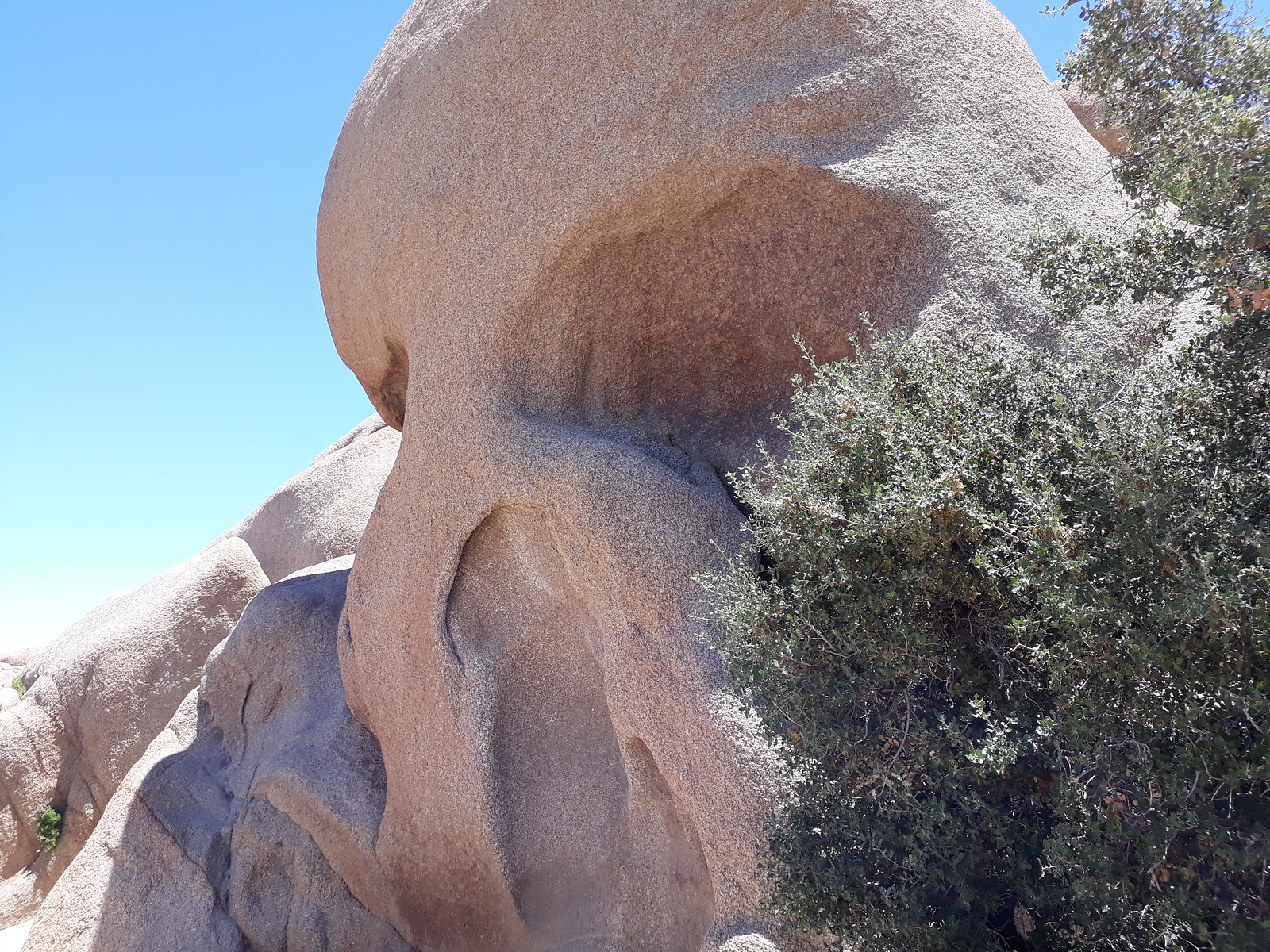 Temperatures were already at a sweltering 100°F (38°C) in the early afternoon as we headed to the trailhead of Arch Rock. Although it was only a 0.4-mile trek, the heat made it a struggle to comfortably hike over. Even when we did reach Arch Rock, it was still quite the distance away– unless we were willing to scale over some treacherous-looking boulders to get closer, we just opted to admire it from where we stood before rushing to the car for water and A/C (whew!). 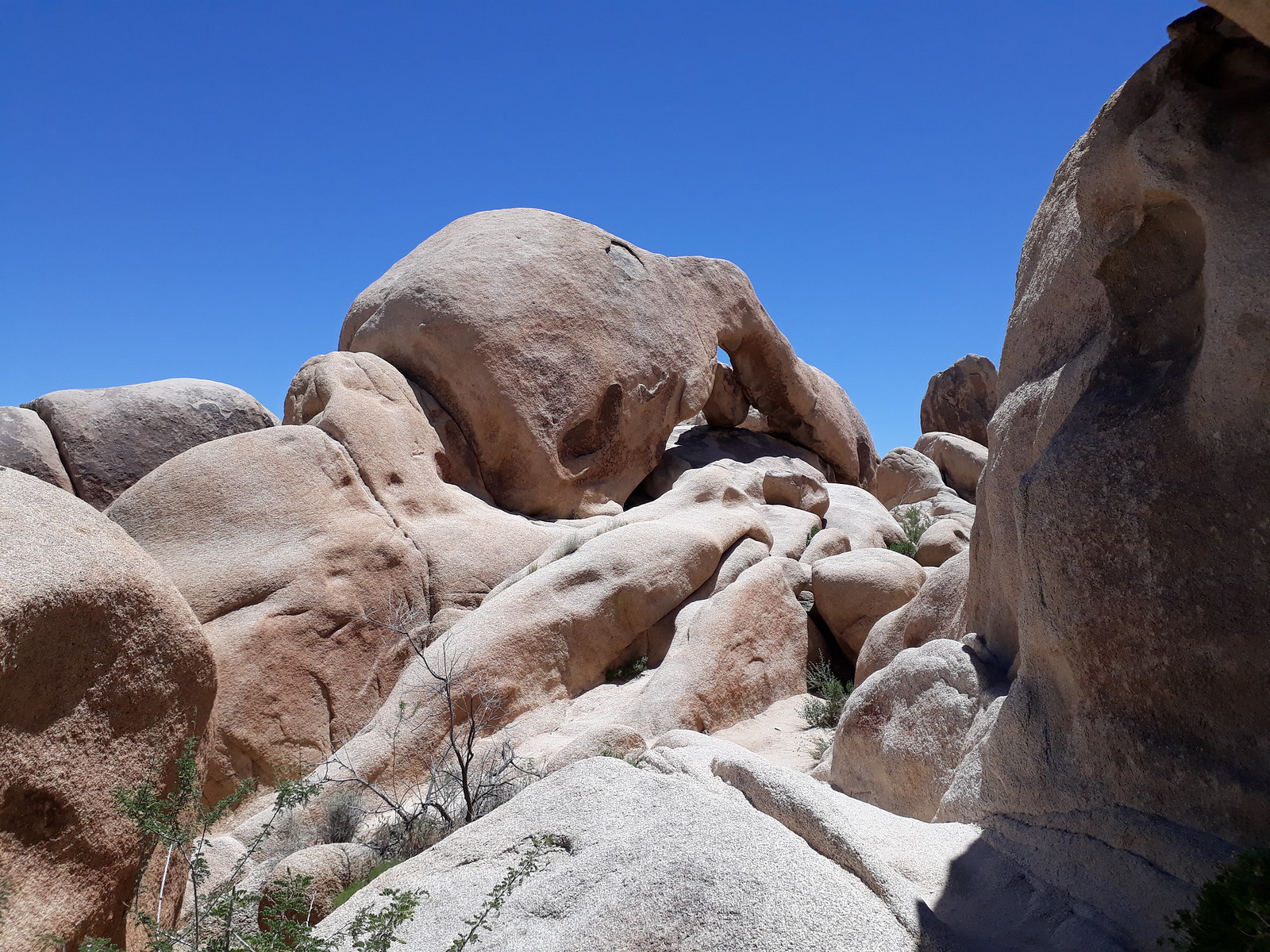 Arch Rock from a distance.

It was a matter of saying goodbye to the Mojave Desert as we traversed the park from northwest to southwest, into the Colorado Desert. The change in topography was subtle, but noticeable as we saw fewer Joshua trees and more cacti in place of them. We stopped at the Cholla Cactus Garden to marvel at the array of the knee-high succulents, before ending at the Cottonwood Spring Oasis for a glimpse of palm-like trees and heading out by 15:00 to return to Los Angeles (if we wanted to return by dinnertime, that is). 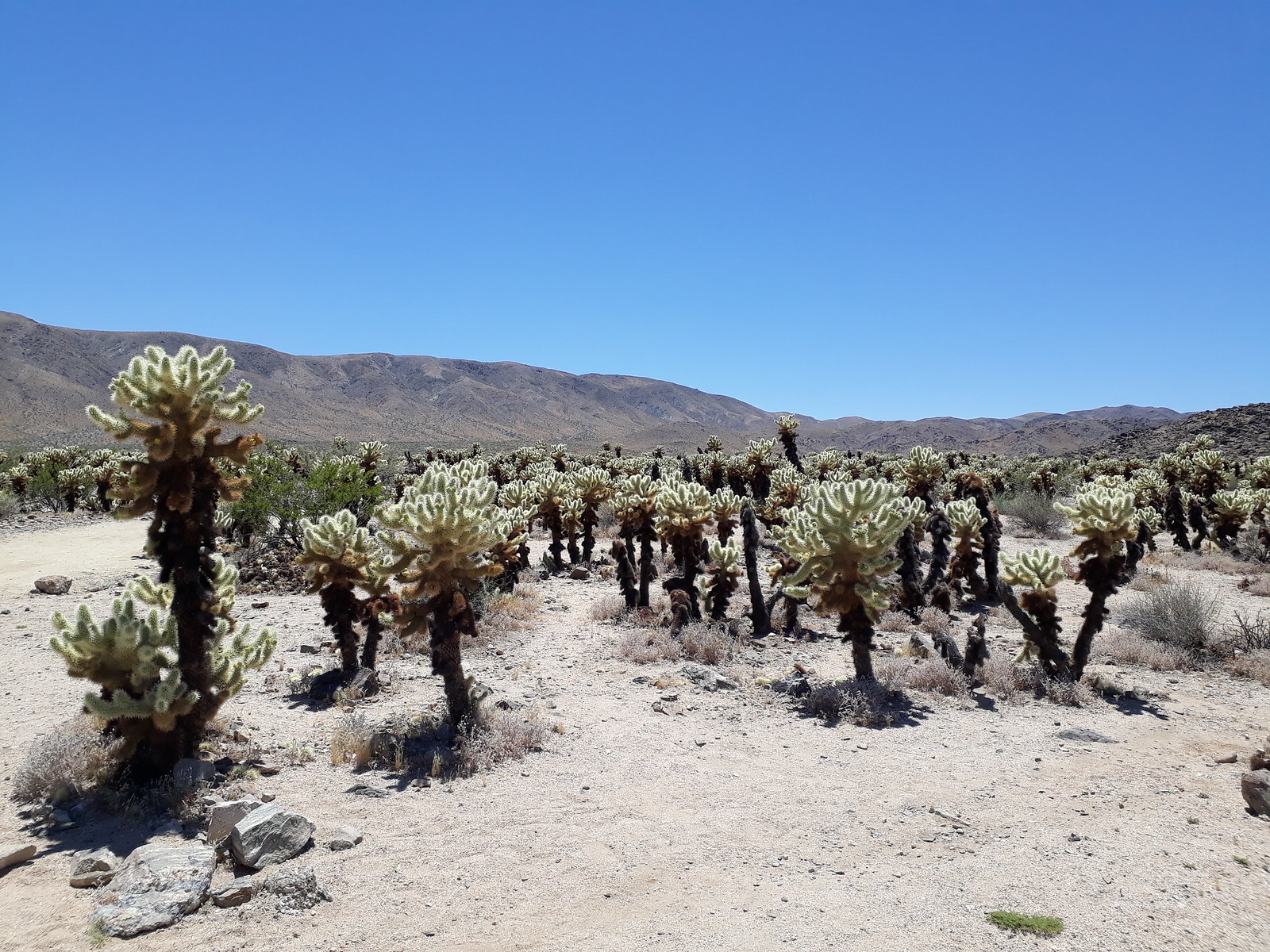 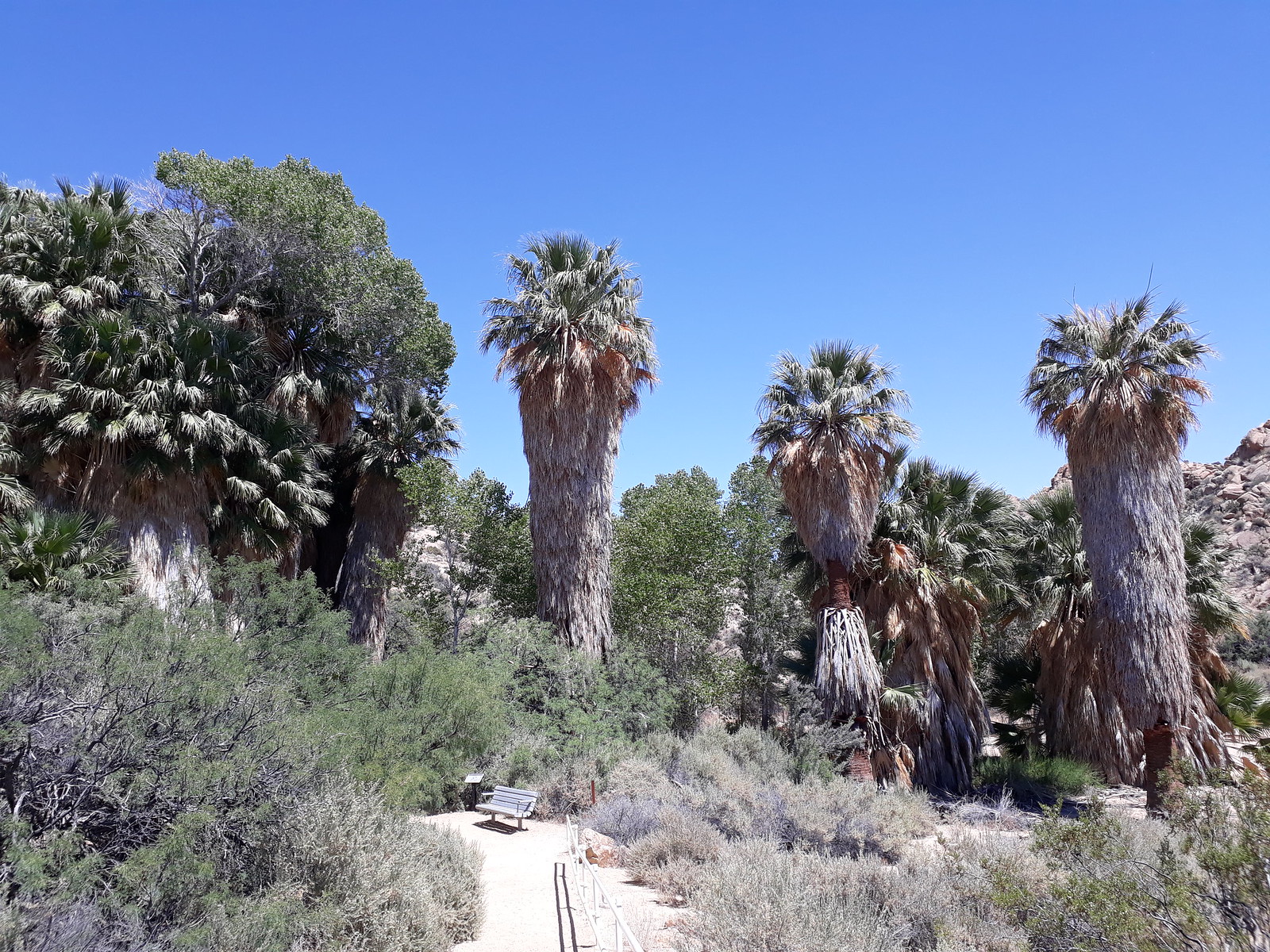 Overall, it was a long and exhausting day at Joshua Tree National Park. Going in the heat of summer might not have been the most-ideal, as it did hit 108°F/42°C at one point. But I will say that I enjoyed checking out a unique part of my home state that I hadn’t seen before, as well as to get out of the house in the midst of the pandemic. It’s definitely the smaller trips which remind you why you love travel so much– I hope to return to Joshua Tree someday to stay overnight and capture the stars. We will have to see! 🙂