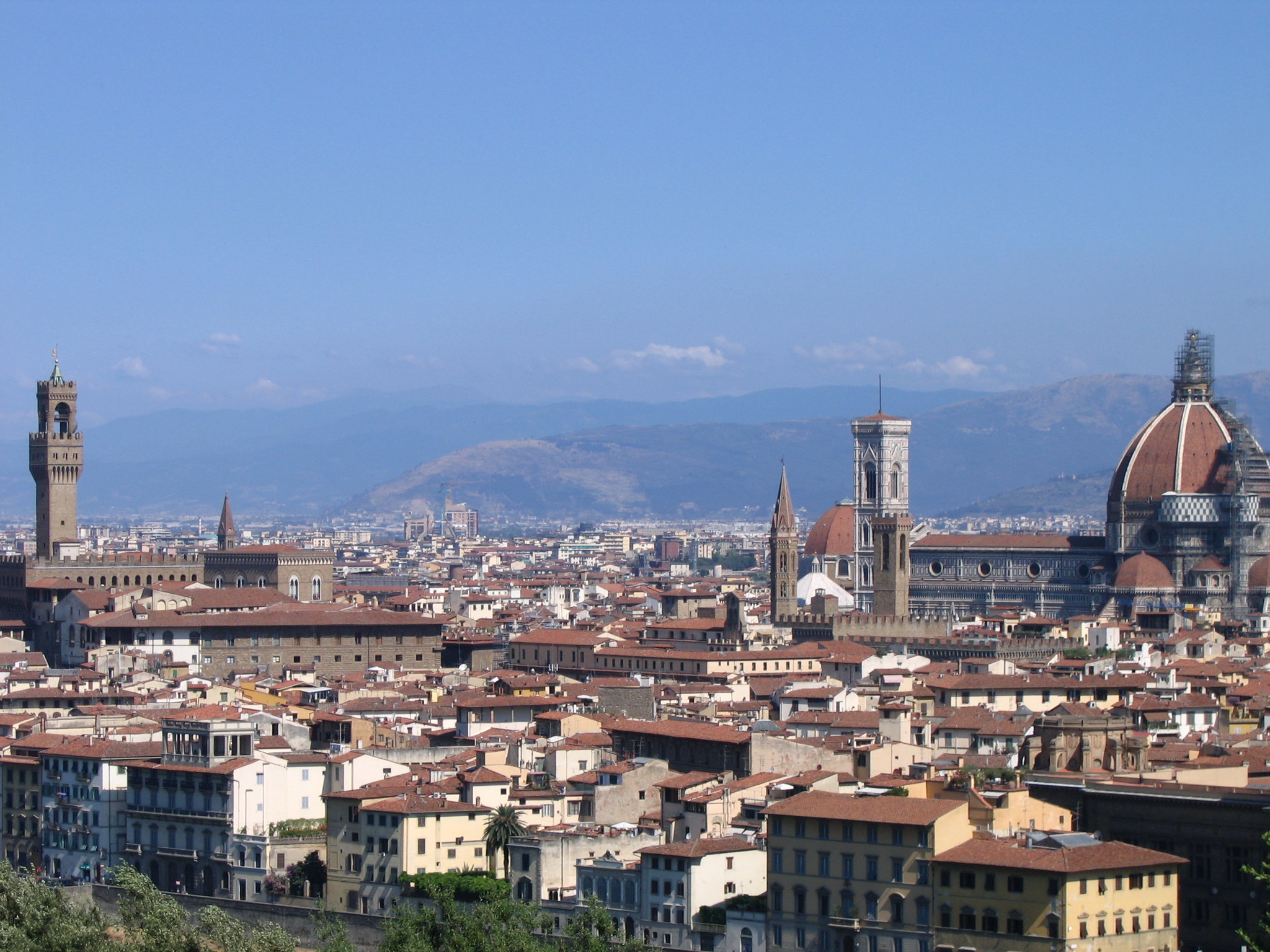 Firenze or Florence? Ah, the age-old question…It’s a subtlety that I had no idea about, and it wasn’t until I looked it up that I understood the difference. Essentially, “Firenze” is how the Italians call it, and “Florence” is the English version, derived from “Florentia” in the Roman days. Regardless of what you call it, this Tuscan city is probably the most-stunning place I’ve visited in Italy– ever.

It’s a shame that I only had one day to cover Florence, and it’s truly a disappointment that I haven’t returned to visit afterwards. Despite living in Europe for four years and visiting Italy countless of times, I just never made it back over, let alone to the Tuscany region. Looking through my old photos, I realized that Florence is STUNNING: it’s like one massive, open-air museum, an architecture lover’s dream. It feels like you stepped back in time, as if you could run into da Vinci or Michelangelo on the street and learn their prodigious ways. Whereas Rome has that ancient, Roman-ruin feel to it, Florence is about the Renaissance arts and classics.

Following our short, laid-back visit of Nice, our cruise ship docked in the port town of Livorno, about 57 miles (92 km) from Florence. It was a matter of taking transport for 90 minutes to reach the Tuscan capital, and from there, it was a whirlwind of a day going from site to site, trying to cram in as much as we could. The sheer amount of landmarks is astounding, and there’s no way one could cover everything in a single day. Nevertheless, we did our best.

First stop of the day was at the Piazzale Michelangelo, a plaza located on a hill south of the Arno River which offers that iconic view of Florence, including the Duomo, Palazzo Vecchio, and the Ponte Vecchio. It happened to be a beautiful, blue-sky morning, which made for perfect photos all around. 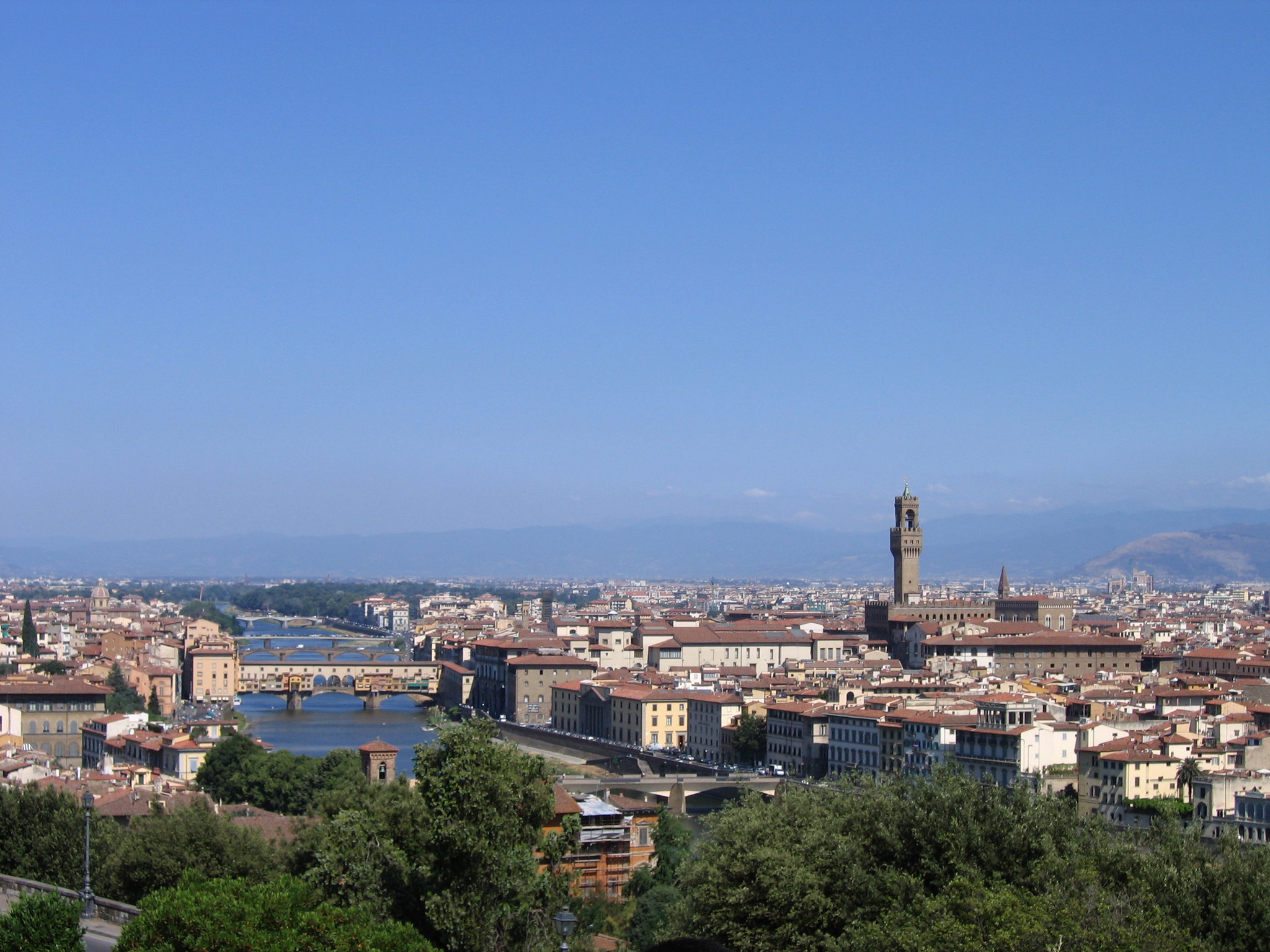 Views of Ponte Vecchio and Palazzo Vecchio in the distance.

We then descended to the Piazza del Duomo, where the eponymous cathedral and Palazzo Vecchio were stationed. This plaza is the most-surreal square I’ve come across among my many trips throughout Europe (let alone the world), as it’s the ultimate architectural feast for the eyes. There are so many buildings concentrated in such a contained space that are hypnotizing in their own rights. We focused on three of them, but again, there are others that could occupy your time for an entire day, if not days.

Of course, the star would have to be Duomo itself. Officially known as the Cattedrale di Santa Maria del Fiore, this Gothic dome is the largest in the world, first constructed in the late 13th century before its completion in the 15th century. Besides its eye-catching dome, its ornate entrance is a work of art in itself, with three bronze doors that represent the motifs of philanthropy, artisans and merchants, and Christ himself. The doors, along with cathedral’s façade, are actually quite recent, having been constructed in the late 19th century in Gothic Revival fashion. The Duomo is a fantastic look into the amalgamation of the medieval, Renaissance, and contemporary styles that spans over six centuries. Truly a great work of art! 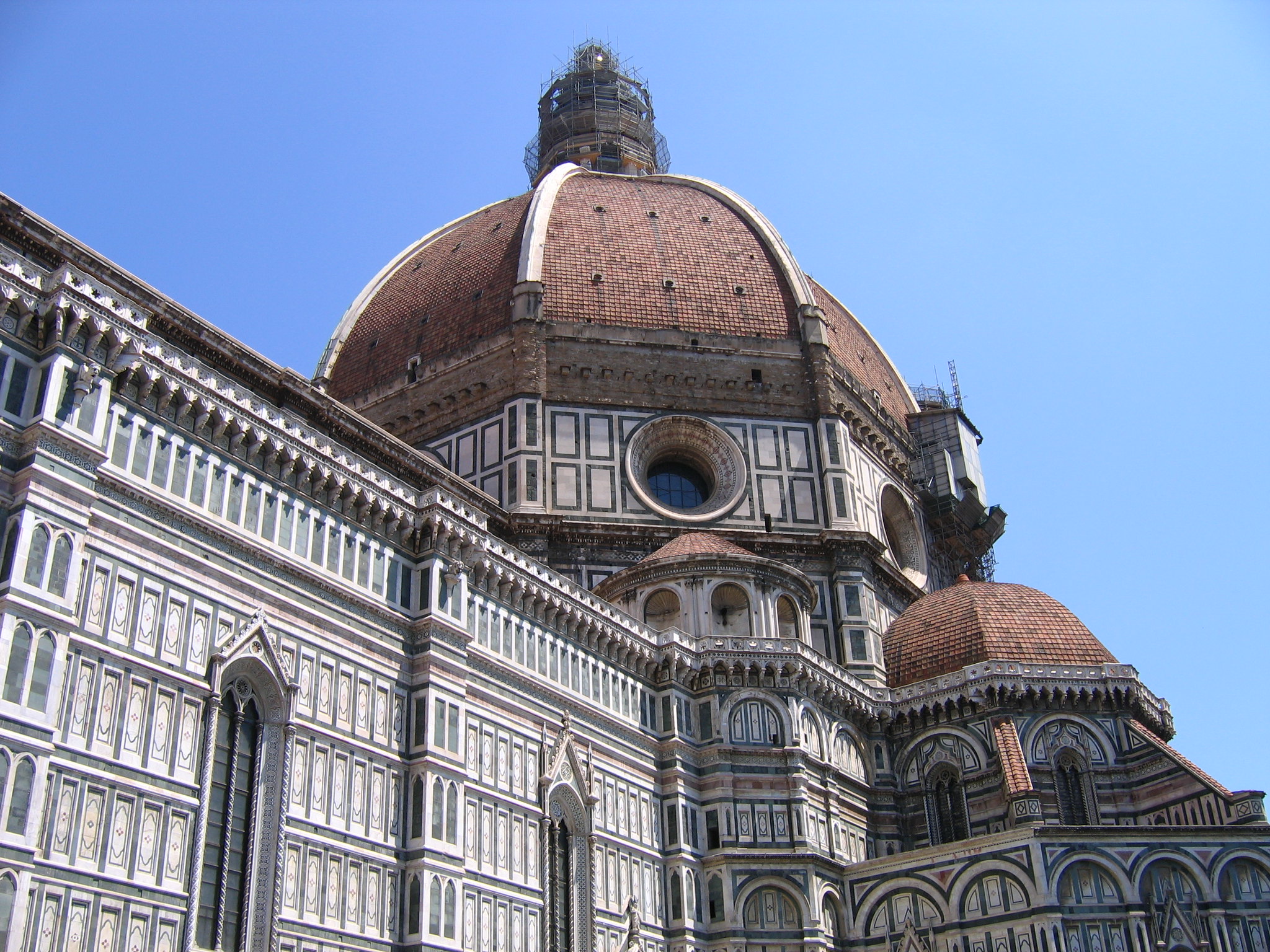 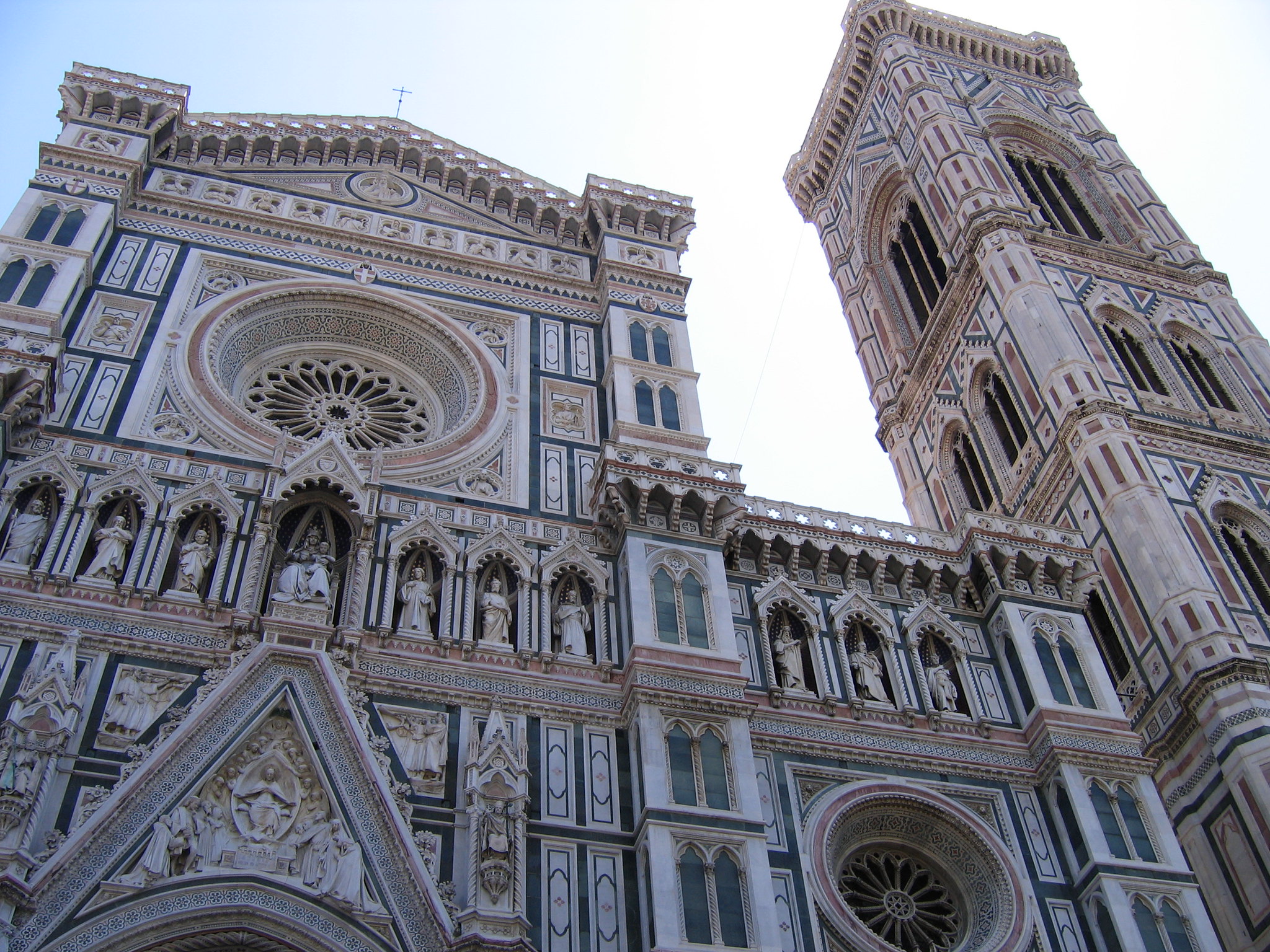 Façade of the cathedral.

Supporting the Duomo are Giotto’s Campanile and Battistero di San Giovanni. The former was first constructed in the 14th century and is known for its distinctive, hexagonal pieces, each side symbolizing a contribution to humanity– religion, the arts, agriculture, social justice, geometry, and astronomy– to name a few. At 85 metres (278 feet), Giotto’s Campanile offers incredible, close-up views of the Duomo and the square below. 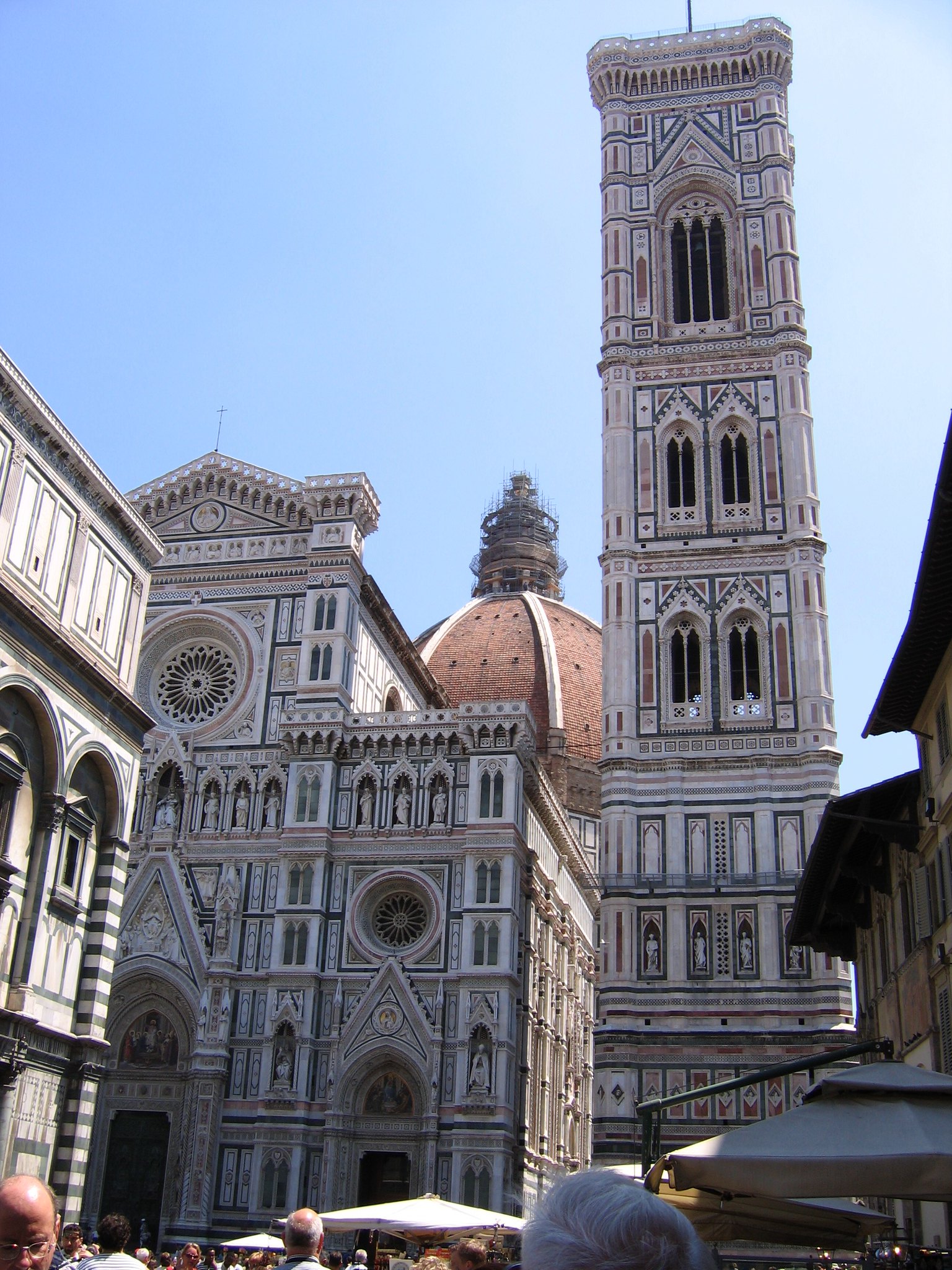 The Battistero di San Giovanni is small and unassuming than the other two, but still holds a stake in notable sights. This baptistery is one of the oldest buildings in Florence, dating back as early as the 11th century. It’s octagonal in shape, and its architecture is what historians call a “proto-Renaissance” style, a predecessor to the actual Renaissance era three centuries later. Great Italian leaders in art and politics were baptized here, including poet Dante Alighieri and the Medici family. 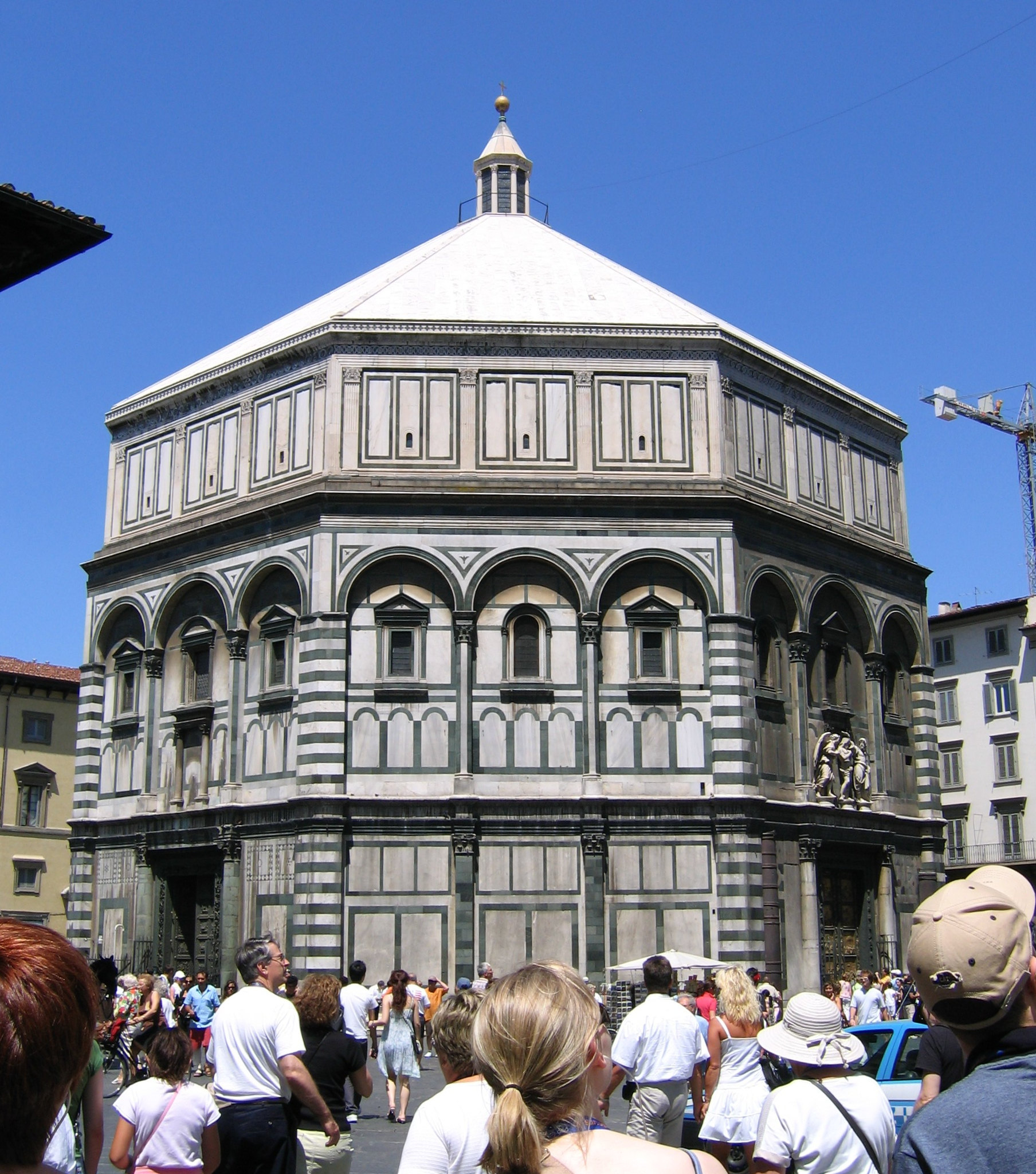 Just next door to the Piazza del Duomo is the Piazza della Signora, home to the towering 13th-century Palazzo Vecchio and copy of Michelangelo’s statue of David (still imposing in its own right). It’s also known for its nine statues depicting Biblical and Greek myths, including David himself, and is sort of an open-air art gallery in itself. Chockful of art and history, as per usual. 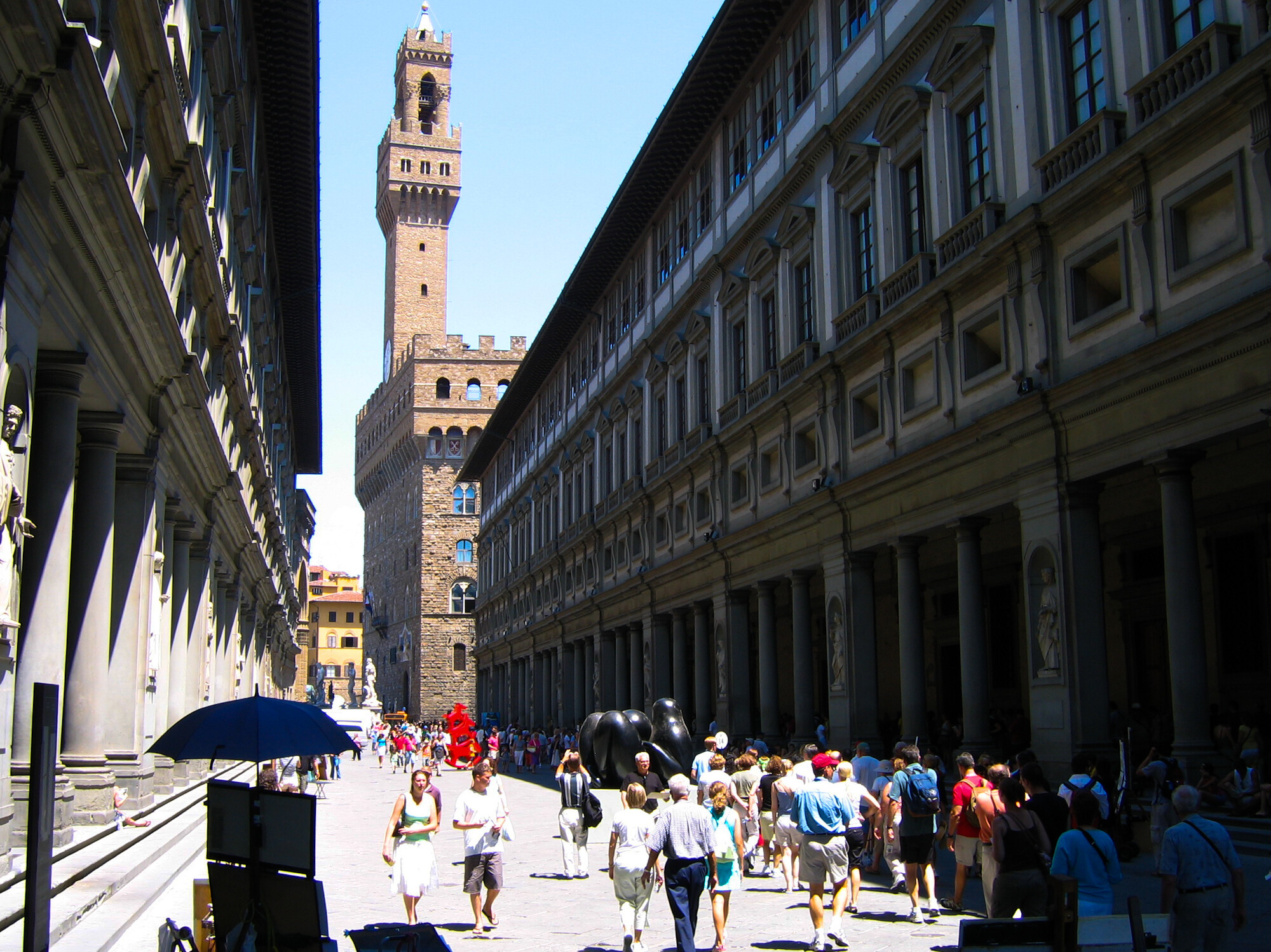 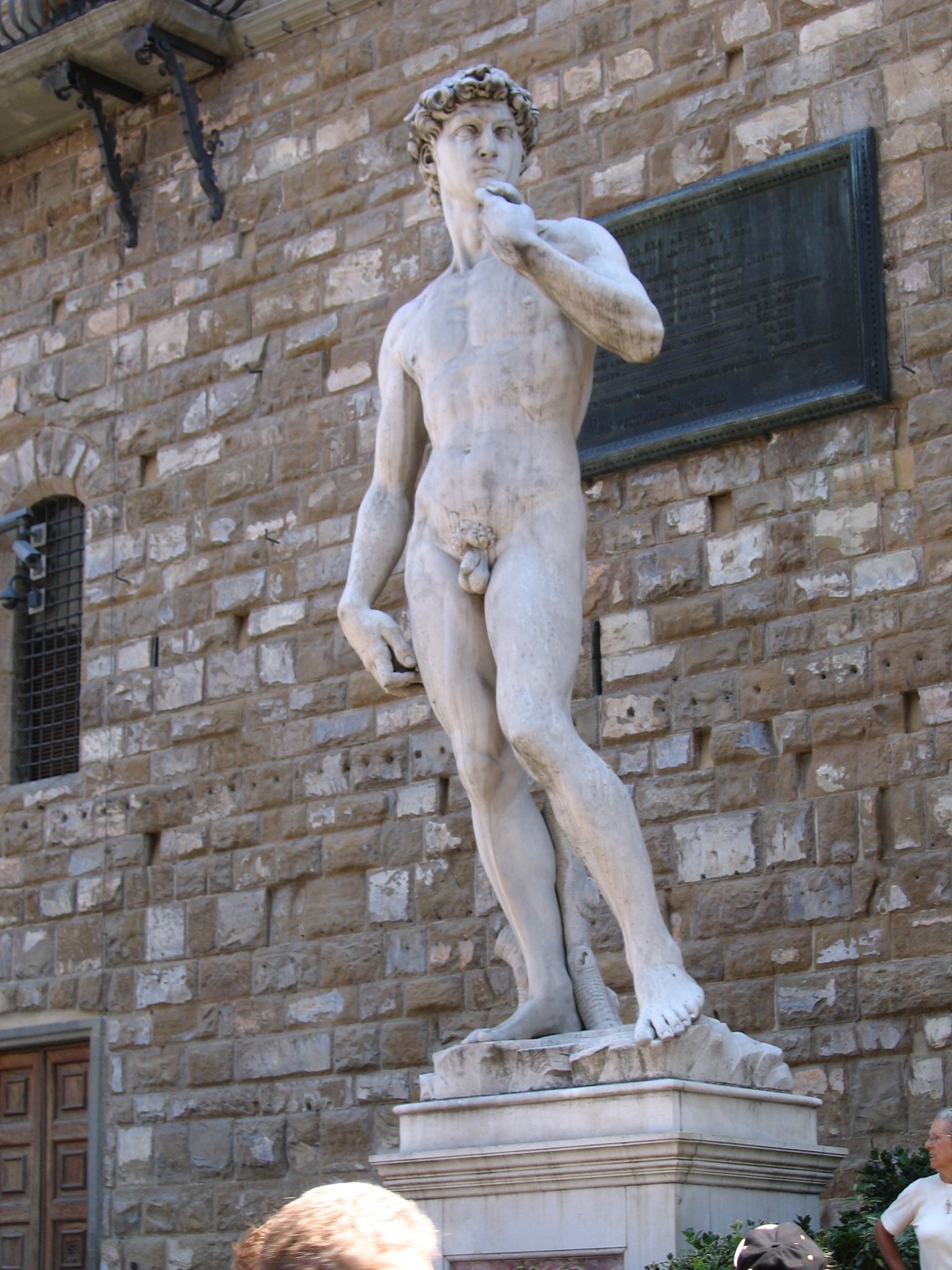 A minute’s walk from the square brings you to the Arno River, where you can catch the distinctive Ponte Vecchio with its colorful artisanal shops poking out from the bridge itself. To say that it’s a uniquely-structure crossing is an understatement, and to admire it from the blue Arno River is a sight to behold. 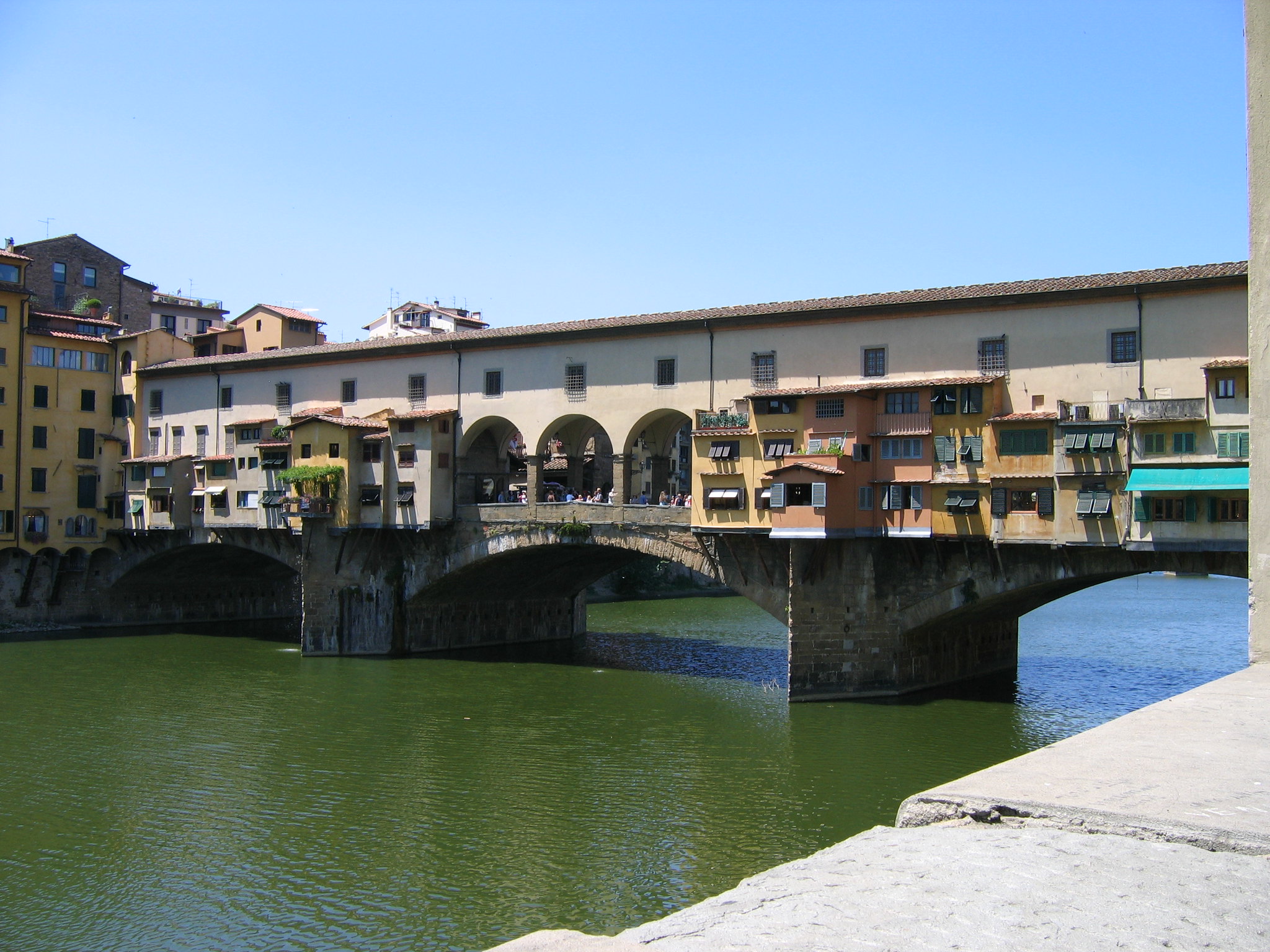 One of our last stops was at the Piazza di Santa Croce, where we checked out the elegantly-ornate Basilica di Santa Croce. A Franciscan church that was first-constructed in the late 13th century, this building is home to some great artworks inside its quarters, including from the great Donatello himself. What makes this church monumental, however, is the number of famed artists and philosophers buried here, including Michelangelo, Rossini, Galileo, and Machiavelli. It’s certainly not a place to overlook! 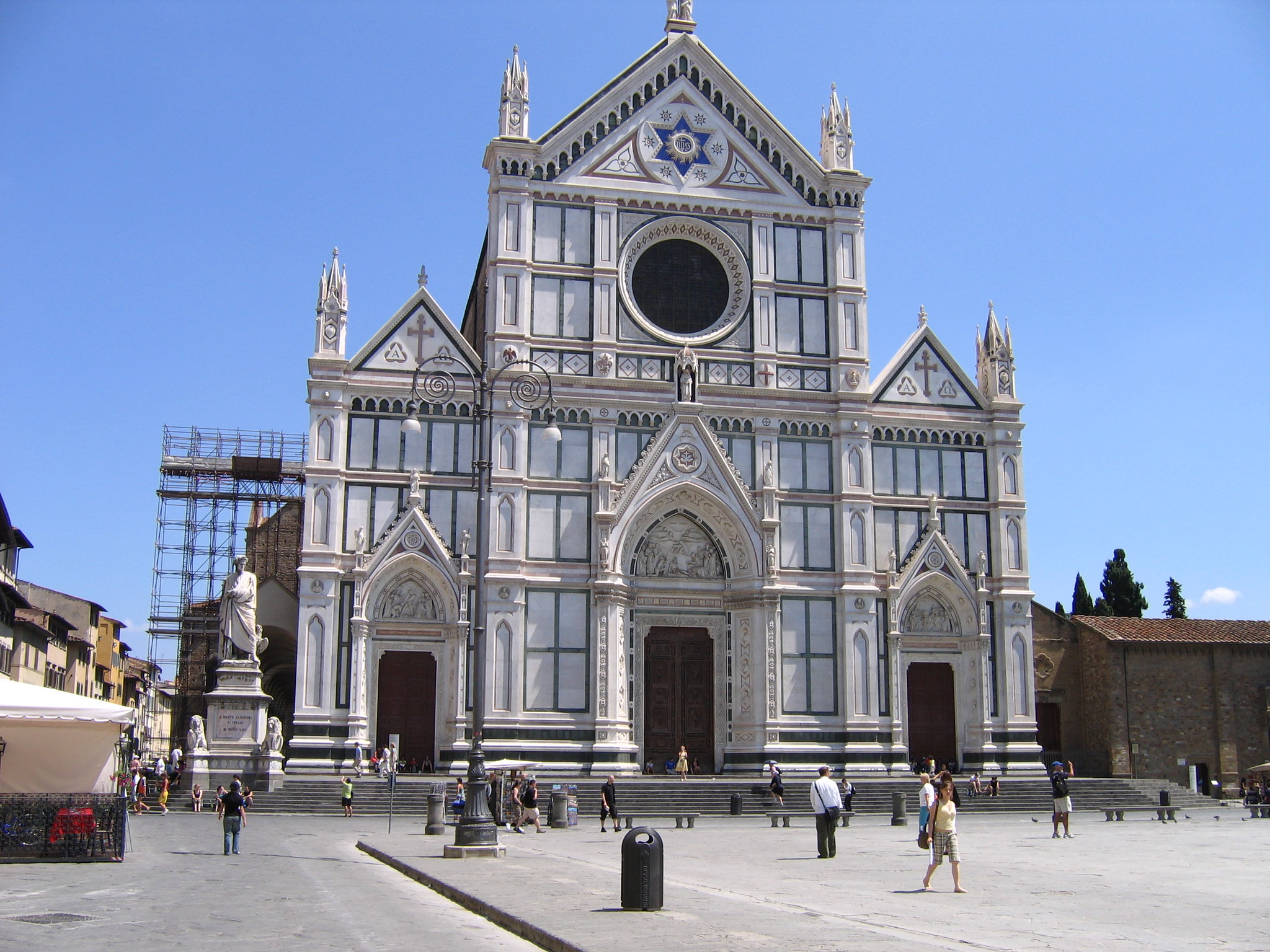 Our time in Florence ended shortly thereafter, and we were shuttled back to Livorno to our cruise ship before departing later that evening. It was an intense day of hopping from piazza to piazza, yet it wasn’t enough time to scratch the surface of so many other sights we could’ve seen. All the same, it left me impressed and wanting more; I’d love to return someday just to spend a week taking it all in, along with the beautiful Tuscany countryside. Whether you call it Firenze or Florence, it’s certainly not a place to miss in Italy!