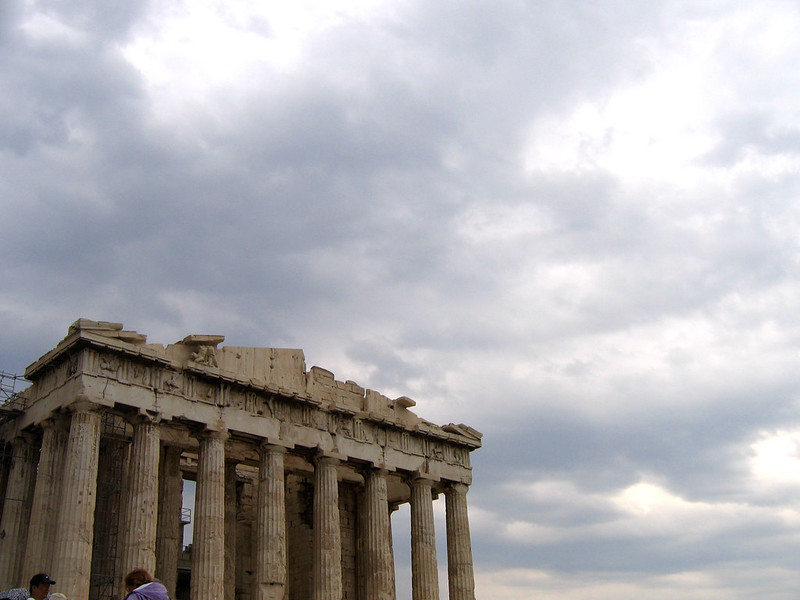 Although Athens was not the final destination of our two-week trip along the Mediterranean, it was the last place that I had visited and did not return to during my time living in Europe a decade later. In fact, I did not return to Greece in my adulthood, and so all I have of the country is limited to the low-quality photos and vague memories from my then-teenage brain. All the same, let’s give it a try!

The capital of Greece, Athens is like Rome of the East. Steeped in millennia of history and rich mythology, it is a popular tourist attraction to see all of the temples and to step back into time, even in the middle of a now-modernized city. As I had taken Greek mythology courses for school just the year prior, I was especially excited to see what Athens had in store for us.

Weather was overcast on the day we docked in the Port of Piraeus, located in the Greater Athens Metropolitan area and about 10 kilometers/6.2 miles from the city center. It was unusual to see such grey skies, considering we had spent the past week in France, Italy (and Santorini) in pristine, blue-sky weather. We hoped that the weather could clear up as the day went on, but unfortunately, it did not.

Our tour guide was a Greek woman who, I admit, was not the best guide. It wasn’t like she was mean or anything, but she was not very informative about the sites and their histories. It was so bad that she had to ask the tour driver to confirm what she had said was correct, or to provide extra detail about a specific landmark. Perhaps she was new to the job, but I will say that it made the Hungarian tour guide we had in Pompeii look like an intellectual.

I have vague memories of what we saw in Athens that day, but I know we definitely saw the Acropolis, the citadel which includes the famous Parthenon and the Erechtheum. Dating all the way back to 400 BCE, the Acropolis is in near-complete ruins today, with only a few of its structures surviving. It was a bit of an uphill walk to sites like the Parthenon, as well as rocky with all of the rubble on the path. Again, the grey clouds hung heavy in the air, with even the slightest bit of drizzle– all the same, it offered a unique, dramatic effect in the photos we took. 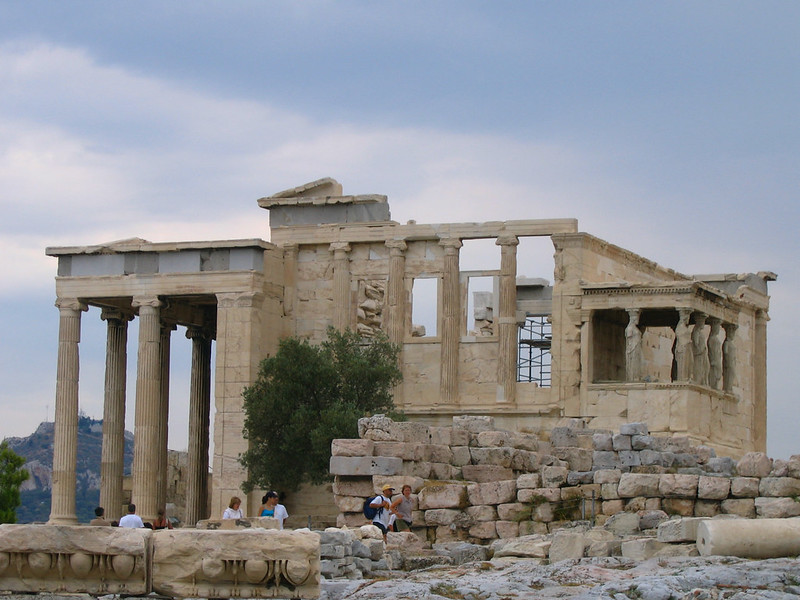 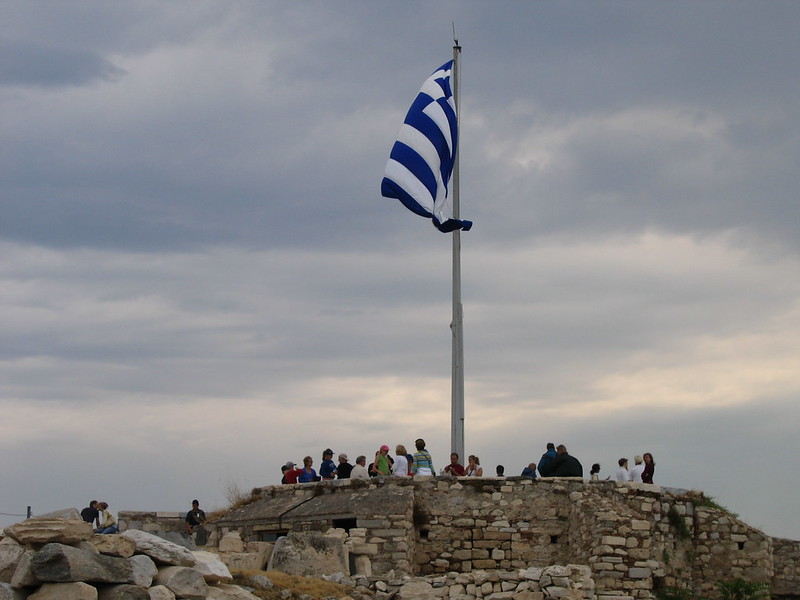 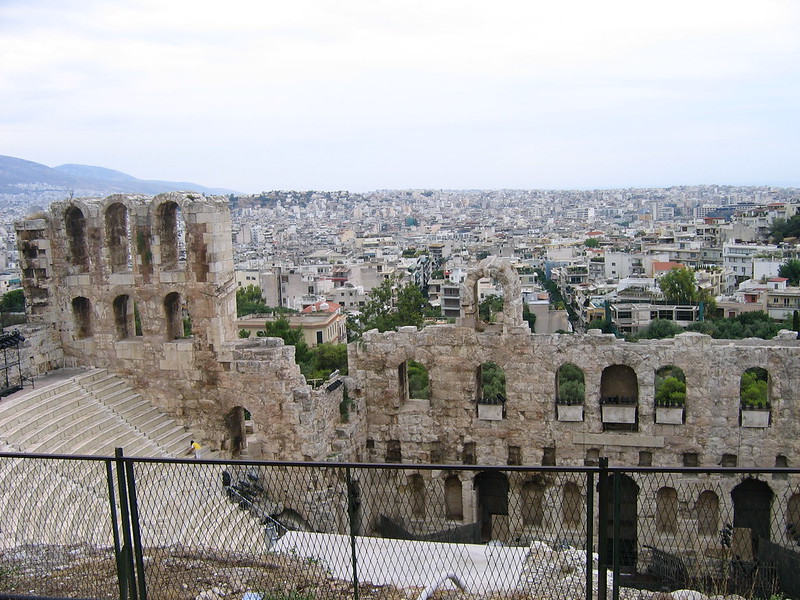 The back of the Herodion (ancient Greek theatre).

Aside from the Acropolis, I do not recall what else we did that day in Athens. Based on the photos taken, I believe we took a bus ride through the city center, passing by the Hellenic Parliament with the Greek guards in their garb at the entrance. And I believe we took a bird’s-eye view of the Acropolis from Mount Lycabettus, another of the city’s hills. It was perhaps only an afternoon in town before we returned to our ship and left for Dubrovnik. 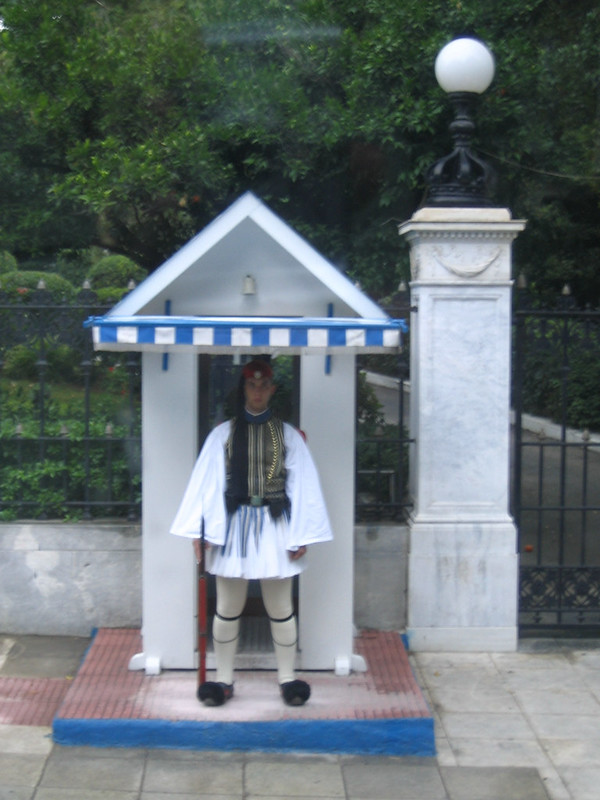 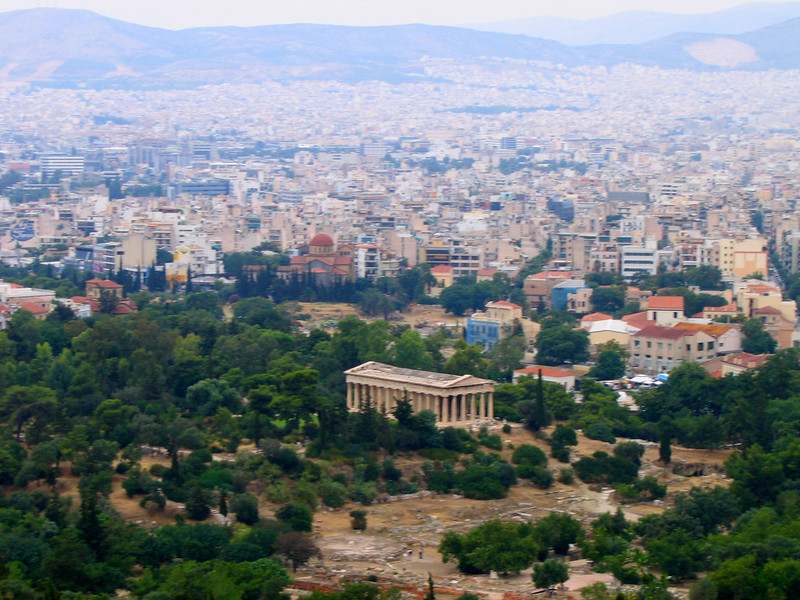 View of the city from above.

Sadly, I found Athens to be a disappointment. It was due to several factors, including drab weather, a not-so-informative tour guide, and the overall atmosphere of the city center. The Acropolis was lovely, but I found driving through the actual center of Athens to be rather run-down and dirty, at least back in 2006 when I went. Perhaps it has improved since then, but from all of these reasons, they make me reluctant to head back anytime soon.

That is to say, I am not completely writing off Greece for a return visit. In fact, I am willing to give it a second chance. After all, I enjoyed Santorini, and I would love to spend more time checking out the other islands in the country. As for Athens, I would return for convenience, as means of flying in and spending a night there before heading to the Greek islands. Maybe Athens will redeem itself in my eyes a second-time around, and only time will tell when I can go back.

This concludes the last of my throwback Mediterranean trip from 2006. It is unbelievable that it has been 15 years since then, and how much I have come in travel since then. Those two weeks were a great introduction to Europe, and it wouldn’t be until 2012 that I would return to check out the Scandinavian countries and 2015 when I would move abroad to France and end up living there for four years. I suppose you could call this the start of my “European love affair,” but in any case, it was a fun summer filled with plenty of sun, culture, history, and quality time with my family. Couldn’t have traded it for anything else, honestly.

Thank you for reading this series, and I promise more adventures to come soon! 🙂