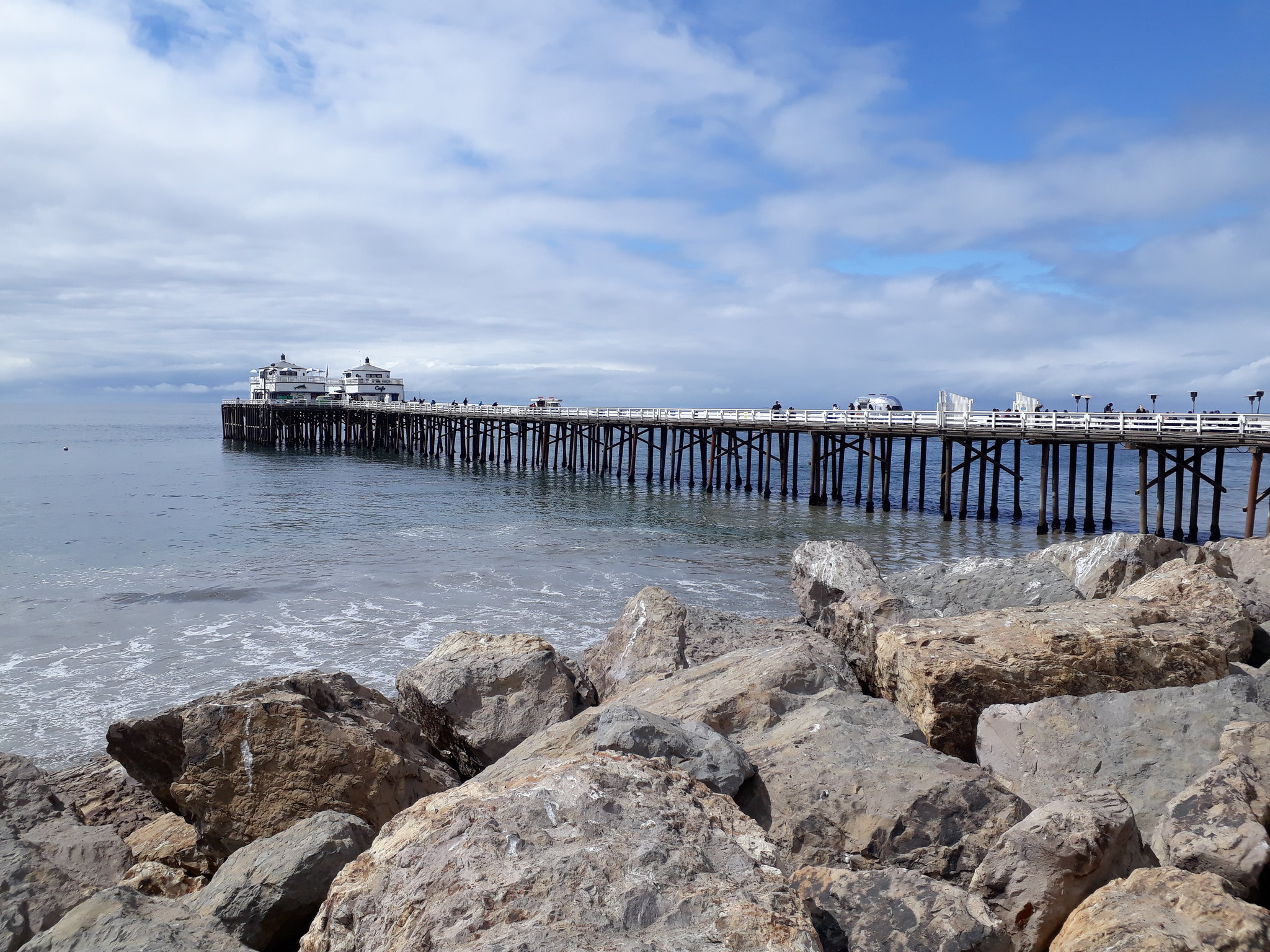 When one thinks of Malibu, some words that come to mind might include “beach,” “affluent,” “secluded.” All of them are correct, as this coastal city located at the very north-west corner of Los Angeles County is world-famous for its pristine beaches and multi-million dollar homes along its shores. Locals and tourists alike flock to Malibu at all times of the year, to be close to the waves to surf, tan, and otherwise enjoy the “California dreamin'” life.

With its slogan “21 Miles of Scenic Beauty,” Malibu is nothing short of jaw-dropping views. The city itself is delineated as a thin stretch of town, mostly-contained along Highway 1, aka Pacific Coast Highway, which covers 655 miles (1054 km) of California’s coastal route. Driving along “PCH,” as we locals call it, one gets views of the Pacific Ocean, which makes for gorgeous scenery should one take a road-trip through the state. Malibu is a part of that stretch, located at the most-western end of Los Angeles County’s border before one enters the neighboring Ventura County.

Due to its narrowly-shaped geography, the city isn’t very large and it’s only home to about 11,000 residents. Some of these residents are well-known celebrities, including Leonardo diCaprio, Jennifer Aniston, and Lady Gaga. Many homes (rather, villas) are gated or perched on top of cliffs, thus offering that privacy and seclusion that’s needed for the famous. These houses are a sight to behold, not to forget worth millions of dollars– it’s true that one pays for the ocean-side views!

To call Malibu “beautiful” is an understatement: it’s no wonder that its Pacific shores have inspired the filming location of so many TV shows from the 2000’s, including Two and a Half Men, Summerland, even Hannah Montana. It’s also the go-to place for photoshoots, and it’s not uncommon to witness a wedding shot while taking a stroll along the beach– in fact, I’ve seen one couple’s photoshoot during a visit, which was heart-warming to see!

I’ve visited Malibu only a couple of times, and it wasn’t until I was in my late twenties that I went for the first time. I don’t live anywhere close to Malibu, so the thought of braving the traffic for over an hour never appealed to me. Plus, I live close to the beach, so to check out another beach in Los Angeles only seemed redundant. However, it wasn’t until the pandemic happened last year that I reconsidered a trip over, as we were in lockdown and had limited means to go out, let alone far.

That said, I first visited Malibu in July 2020, and a second visit in May 2021. It was a road trip of sorts, as my family and I piled into the car early in the morning to make the hour-plus trek over. The ride along the freeway is uneventful, but it isn’t until one gets off the freeway and enters Santa Monica and the Pacific Palisades that the trip truly becomes scenic. This is where one gets the views of the milky-blue Pacific Ocean, as well as the towering, craggy cliffs and winding, hilly roads that accentuate its dramatic look. It’s this particular part of the road that the journey becomes intimate, as it’s quieter and more-residential than any other part of Los Angeles.

What does one do in Malibu? The most-obvious answer is to visit the beaches, some of the most well-known being Zuma Beach, Paradise Cove, and El Matador State Beach. These beaches have a bit of everything to do, from surfing to exploring tide pools. El Matador is my personal favorite, as it’s a bit further out from the other clusters of beaches, which makes it feel less-touristy. The waves feel rougher and primitive, and the tide pools are fascinating to check out. I especially love exploring under the boulders to peek out to the sea, and this is where one can capture some unique shots of the water! 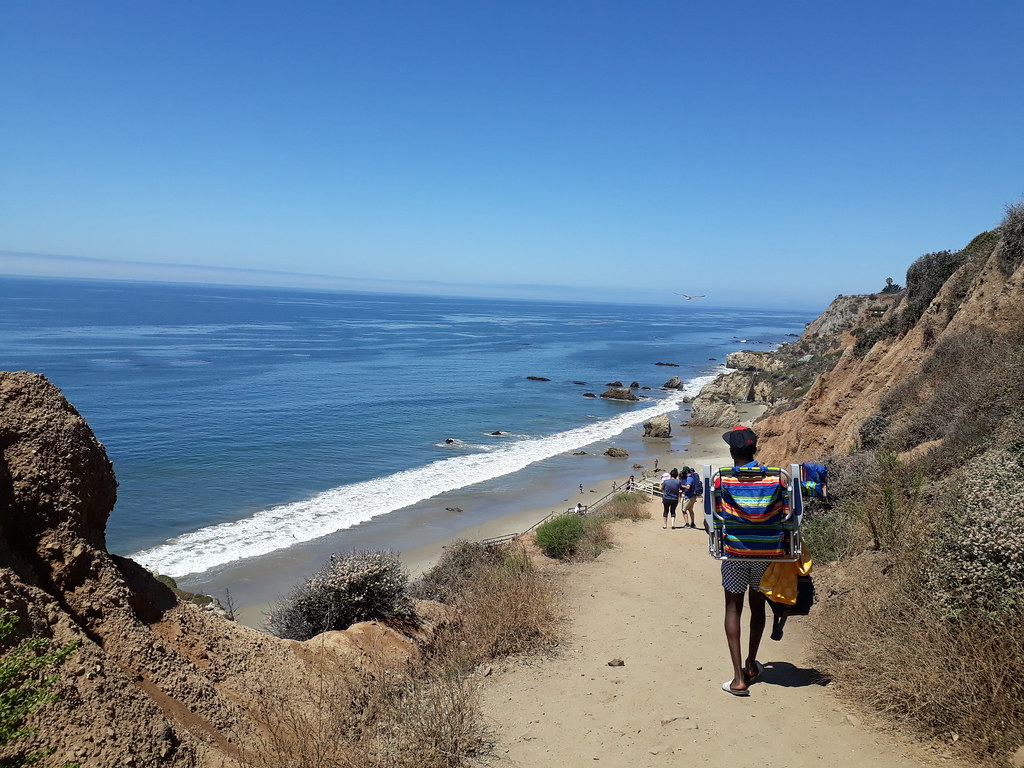 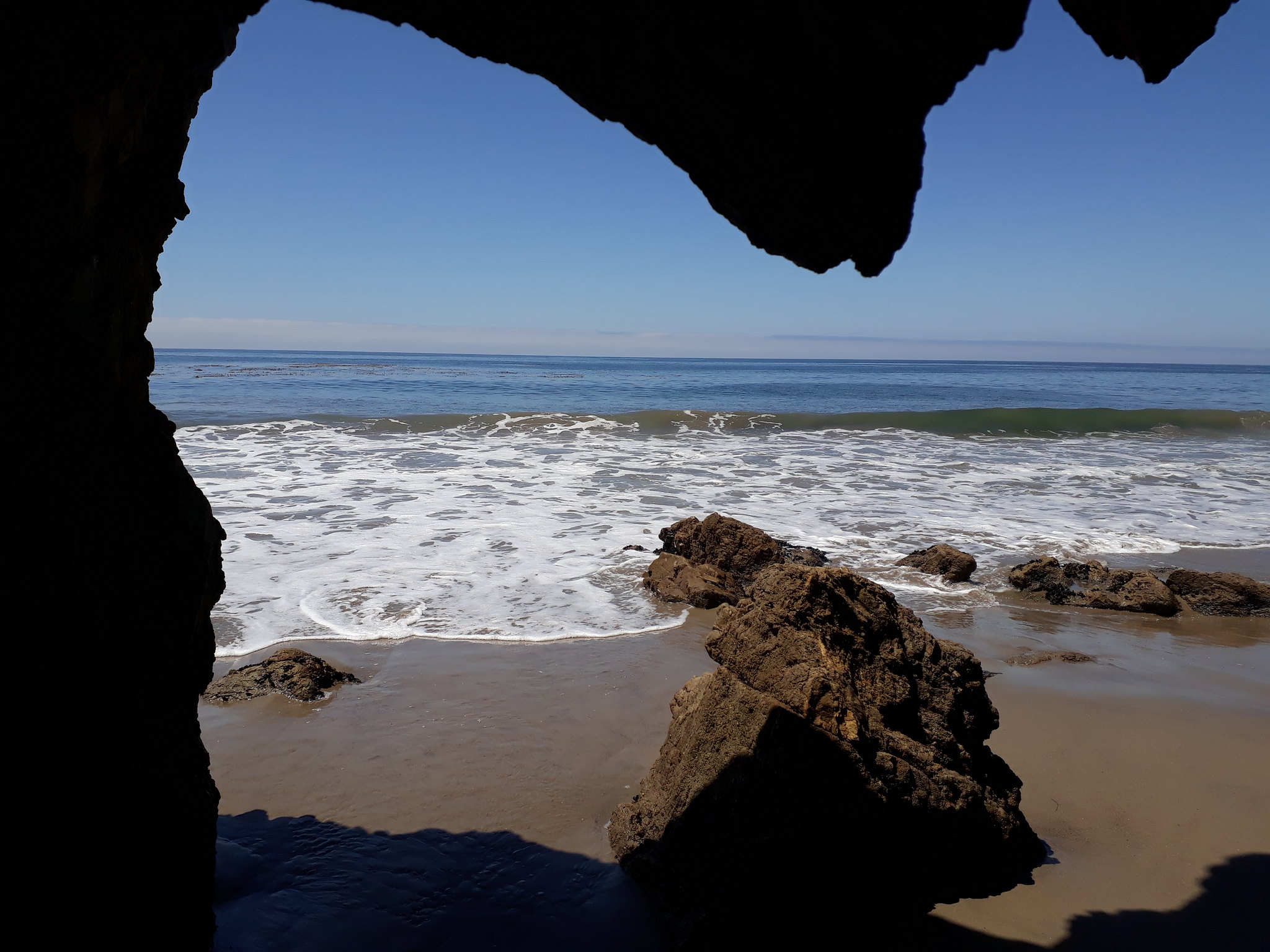 Besides surf and sun, there are also some incredible hikes as one ventures away from the coast and more inland into the verdant canyons of the Malibu State Parks. Two popular hikes include Escondido Falls and Sandstone Peak, which at their shortest are about 3.5 miles (5.6 km). Of course, you can always make them longer and the hilly nature of these trails do offer solid workouts for the adventurous souls. I haven’t done Sandstone Peak yet, but Escondido Falls is a picturesque hike that rewards those with not one, but three waterfalls in the end. 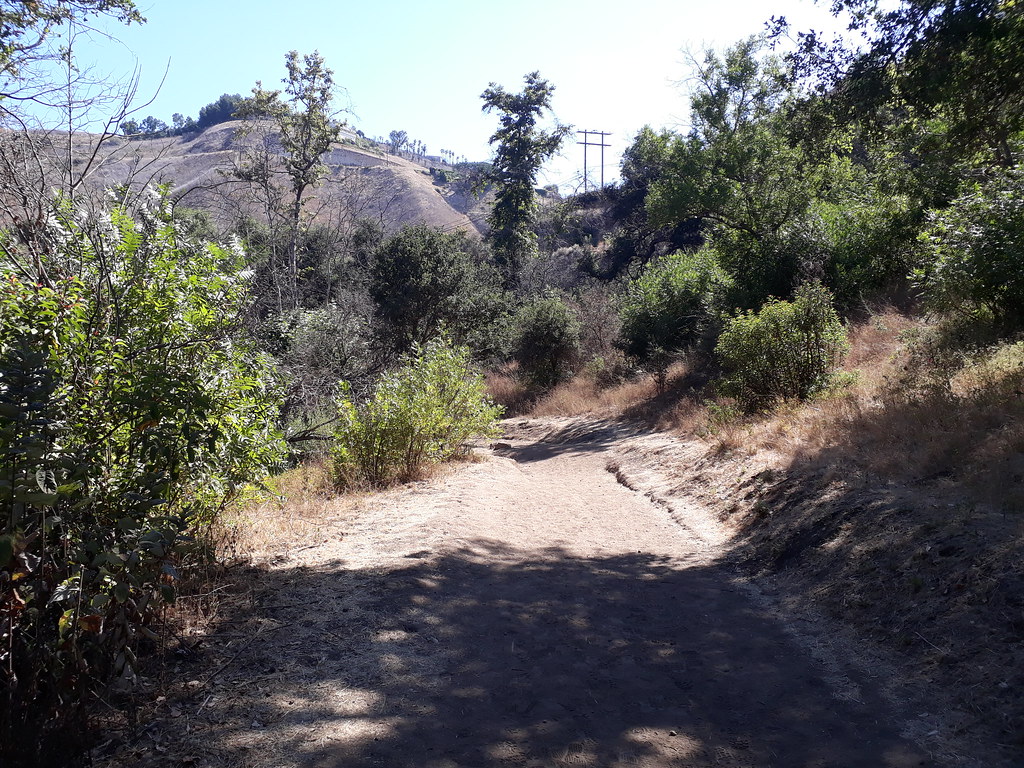 There are also other options to go horseback riding or to explore natural reserves. Point Dume Nature Preserve is a worthwhile stop not only to learn a bit about the conservationists’ efforts to restore wildlife and nature, but also to admire views of the promontory at the top of the bluffs. It’s a short, 1.4-mile (2.3 km) circuit to the top and back, and the sight certainly can’t be missed. 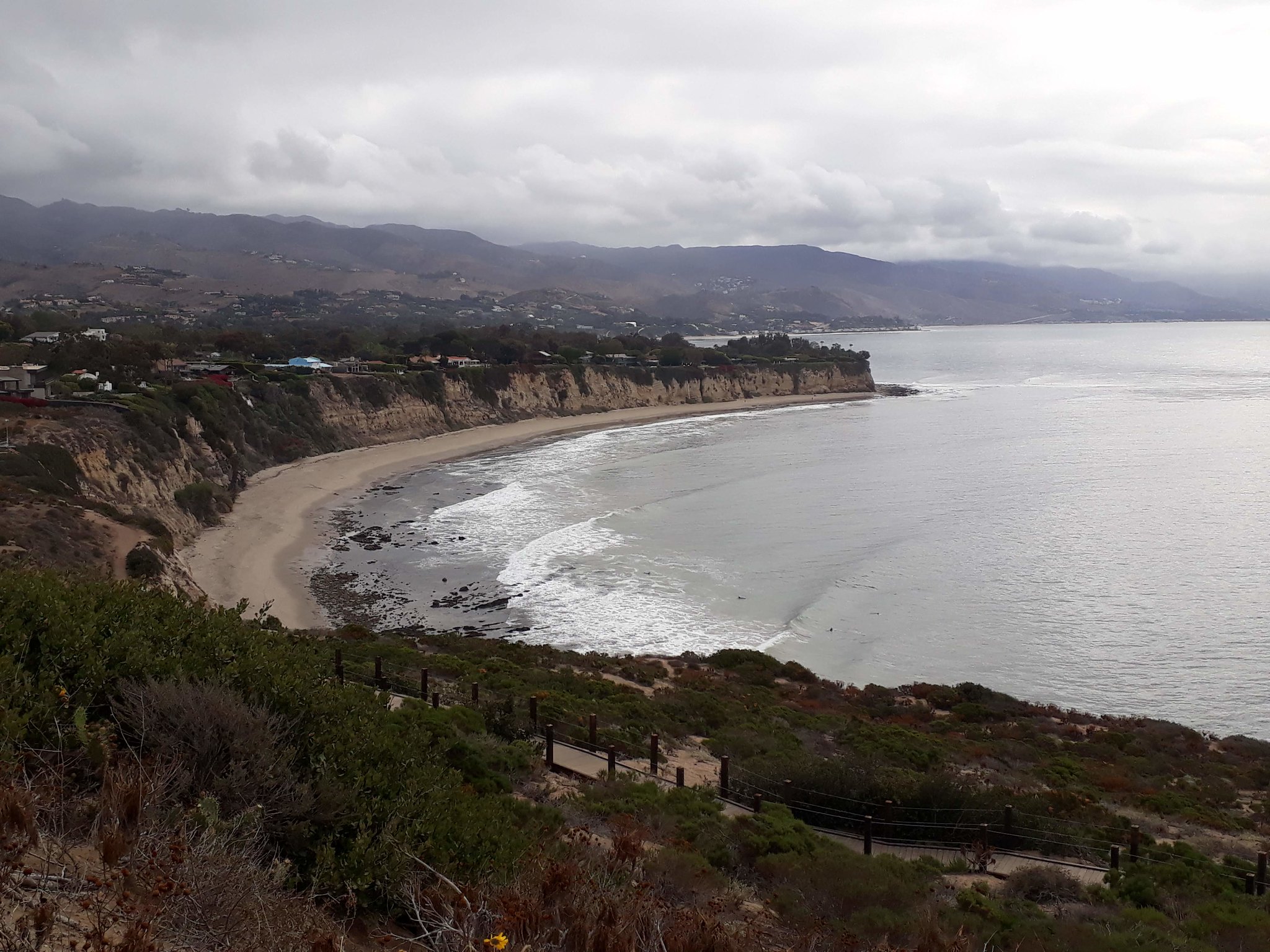 Of course, one can’t miss the Malibu Pier while in town. Distinctive for its two white towers jutting out into the ocean, this pier dates from 1905 and is the spot to be for fishing, al-fresco dining, and a good time out. It’s touristy, but the atmosphere is lively as visitors feast on seafood and stroll the wooden boardwalk, all the while indulging in the warm, California sun. One can also go down to the waters right underneath the pier to check out the tides– it’s especially stunning on a sunny day.

Depending where you’re coming from in Los Angeles, the drive to Malibu can be a long one. As it’s so isolated from the rest of the county, it’s advisable to leave early enough to avoid traffic not only on the freeway, but also on PCH, as it’s the only route to enter the city. Malibu is busy at all times of the day, but arriving before 8h00 (just before places open) is a lot more bearable– by 10h00, forget about finding parking.

Parking itself is the main issue: it’s either parking along PCH or forking over $15 (at minimum) to park on-site. I would advise just to park on PCH, if it’s possible to snag a spot, and just walk the distance over; I’ve at times have parked a mile away and walked, and I didn’t mind it– there was no way I was going to pay $15 for such a short stay!

Arriving on the weekday is ideal, especially during the school months. Even though I’d gone on a weekday in July, it was crowded since schools were out for the summer. Weekends will definitely be busy, but again, by going early (and perhaps on a cloudy day), it can make a difference on avoiding crowds and actually finding parking.

I hope this post on Malibu was enjoyable and informative to read. There’s a good reason why this city is so famous, and I would definitely encourage anyone to visit whilst in Los Angeles someday. I appreciate the support on the “Lost in LA” series, and I promise there will be more to come soon. Until then!