Of all the years I’ve had this blog, it is actually unbelievable that I’ve never written about Étretat! Or at least, a stand-alone post about it. Most of my posts have only included it in lists (e.g. Normandy guides) or jointly with other destinations I went to in the region (Le Havre, Fécamp, etc). Étretat was one of the first and favorite places I’ve been to during my two years living in Normandy, and I’m finally dedicating a post to this beautiful place. ❤

Étretat (“eh-truh-TAH”) had actually been on my bucket list even before I moved to France. I stumbled upon photos of it on Tumblr (remember those days?), and its chalky cliffs- verdant and sharp– in contrast with the emerald Atlantic, captivated me. Definitely bookmarked it for posterity. And what a coincidence that I got accepted to work in France later on (in Normandy, too!), so I made the goal of visiting Étretat as soon as I could.

During those two years living in Normandy, I visited Étretat on three separate occasions. The first two visits were in early autumn of my first year: my colleague drove me over the first time, and we spent an afternoon walking the cliffs and enjoying an apéritif by the water. The second visit was just a few weeks later with two other assistantes I was traveling with, as we did a mini-tour of Normandy (including Fécamp and Le Havre). The third and last visit came over a year later during my second year in the wintertime, when I went with an assistante to hike more of the cliffs and get lunch in town. 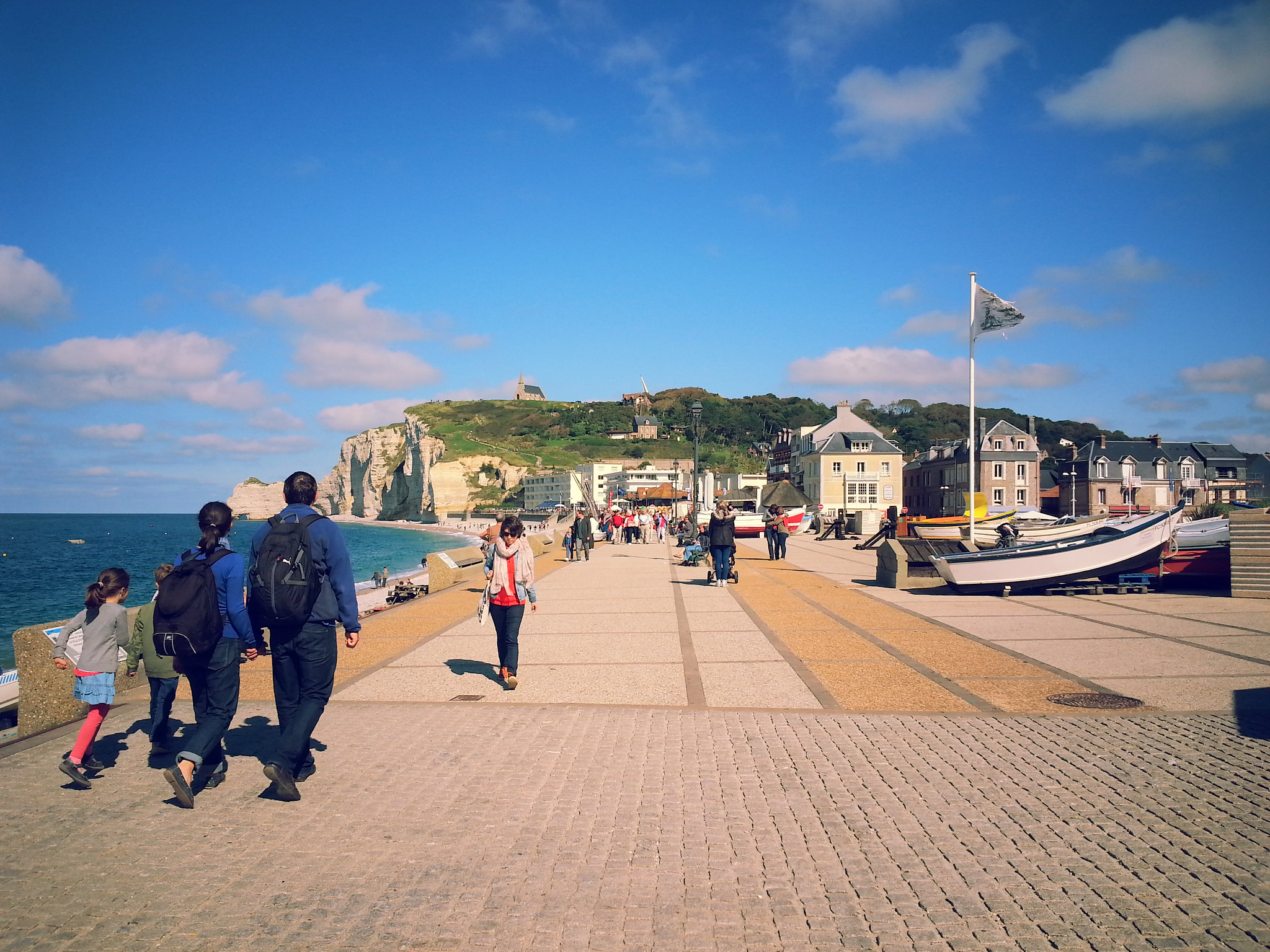 Visiting during the cold and warmer months were a notable contrast– for instance, visiting in September offered sunny skies and temperate climate to enjoy a beer outside by the water. Whereas touring in the dead of January was bone-chilling, with icy grass on the hike and the need for a warm, seafood meal inside a restaurant. But one thing was constant– Étretat is beautiful. It’s no wonder that Impressionist artist Claude Monet painted numerous pieces of its iconic cliffs, as well as inspired writer Maurice Leblanc to pen an Arsène Lupin short story set in town. The cliffs are Étretat are an icon to Normandy, along with the D-Day beaches and Le Mont St-Michel. 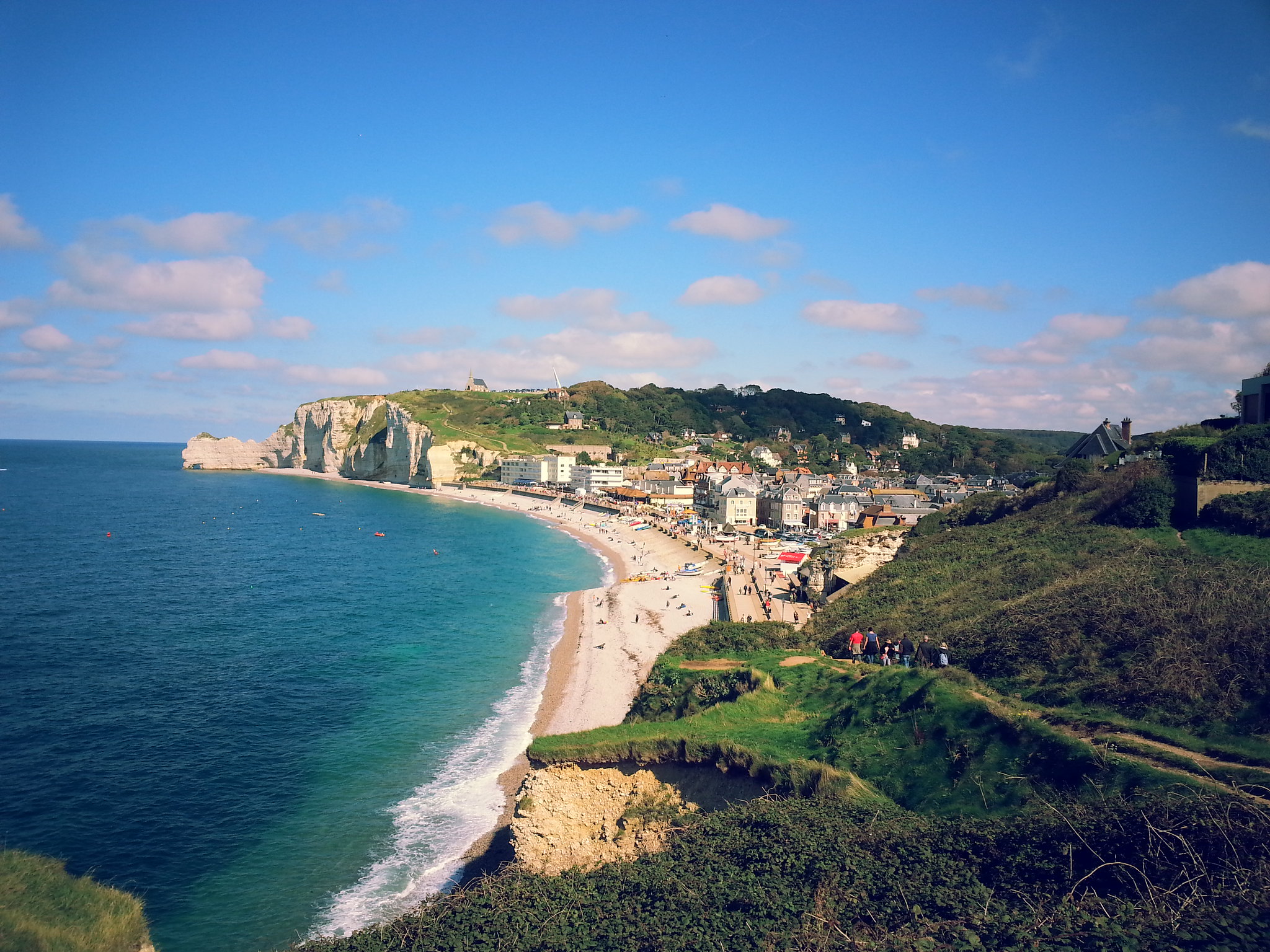 Views of town from the cliffs

Getting to Étretat can be tricky, especially if you don’t have a car. I was fortunate my colleague drove me on my first trip over, but afterwards, I had to rely on a combination of trains and buses. I would take the train over to the nearest big city (which took 45 minutes to two hours one-way), before bussing up to Étretat, another 90 minutes, as there’s no train station in town. And at least from what I remember, the buses only run four times a day, so it’s crucial to time your stay to make sure you aren’t stranded at the end of the day!

The town center is incredibly tiny, but it has your usual amenities including one main supermarket, two or so banks, a few boulangeries, and a handful of restaurants/brasseries catered to visitors. The town is essentially centered around tourism, so you get a lot of folks from out of town (even internationally) coming over for a weekend getaway. That said, it’s unsurprising that there are at least a dozen hotels/BnBs throughout the town to cater to them all. 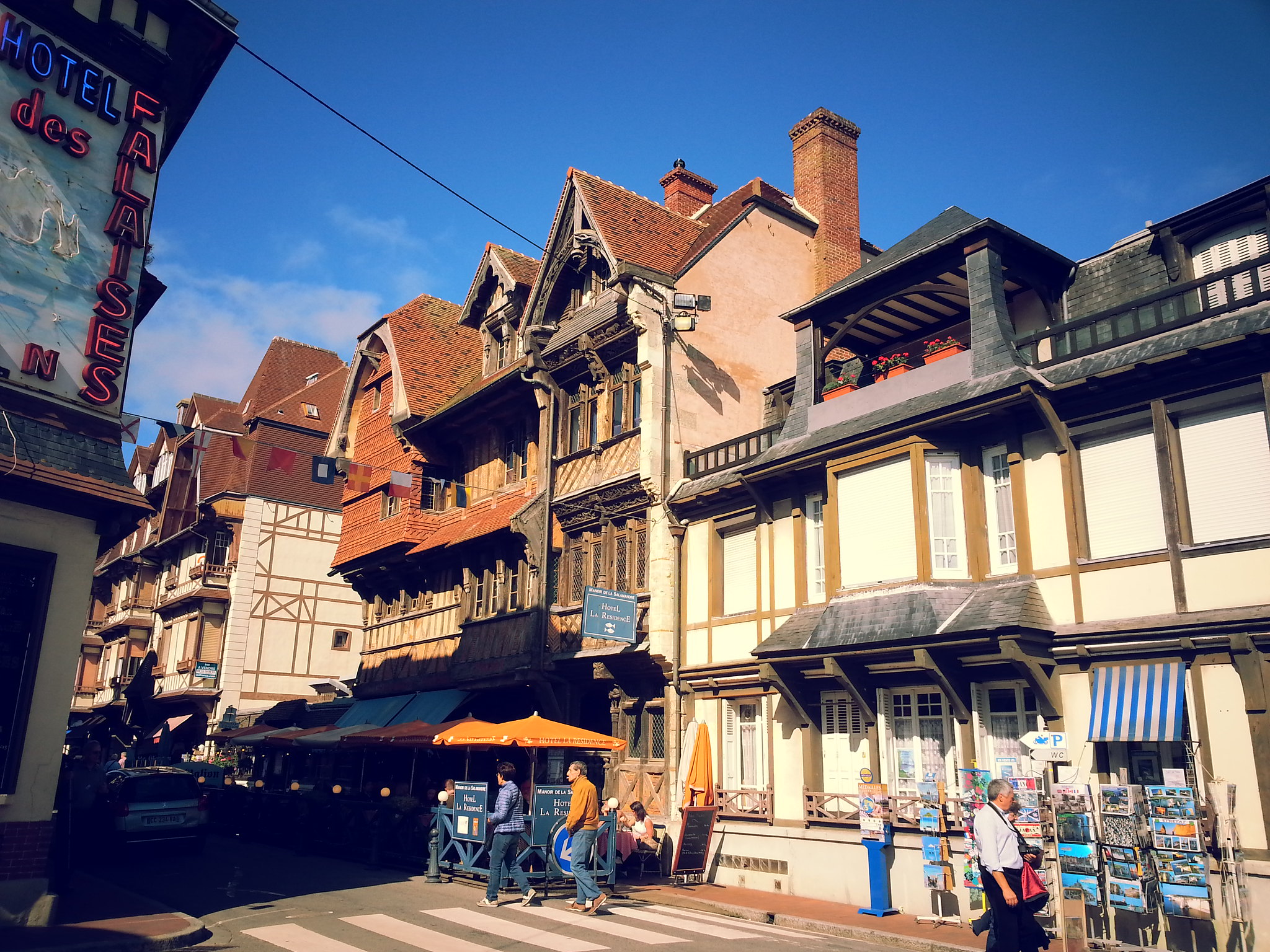 Étretat’s cliffs are the main draw for visitors, as you’ll see plenty of people hiking them– in fact, the cliffs are part of an extensive trail along the Normand coast that goes as far to Le Tréport, over 100 km (63 miles) away. There’s a small, but outstanding chapel on the cliffs, Chapelle Notre-Dame-de-la-Garde, that offers stunning views of the town below, with more of the cliffs in the backdrop. One of the natural landmarks, l’Aiguille Creuse, is commonly photographed, as it stands out from the rest of the chalky cliffs. 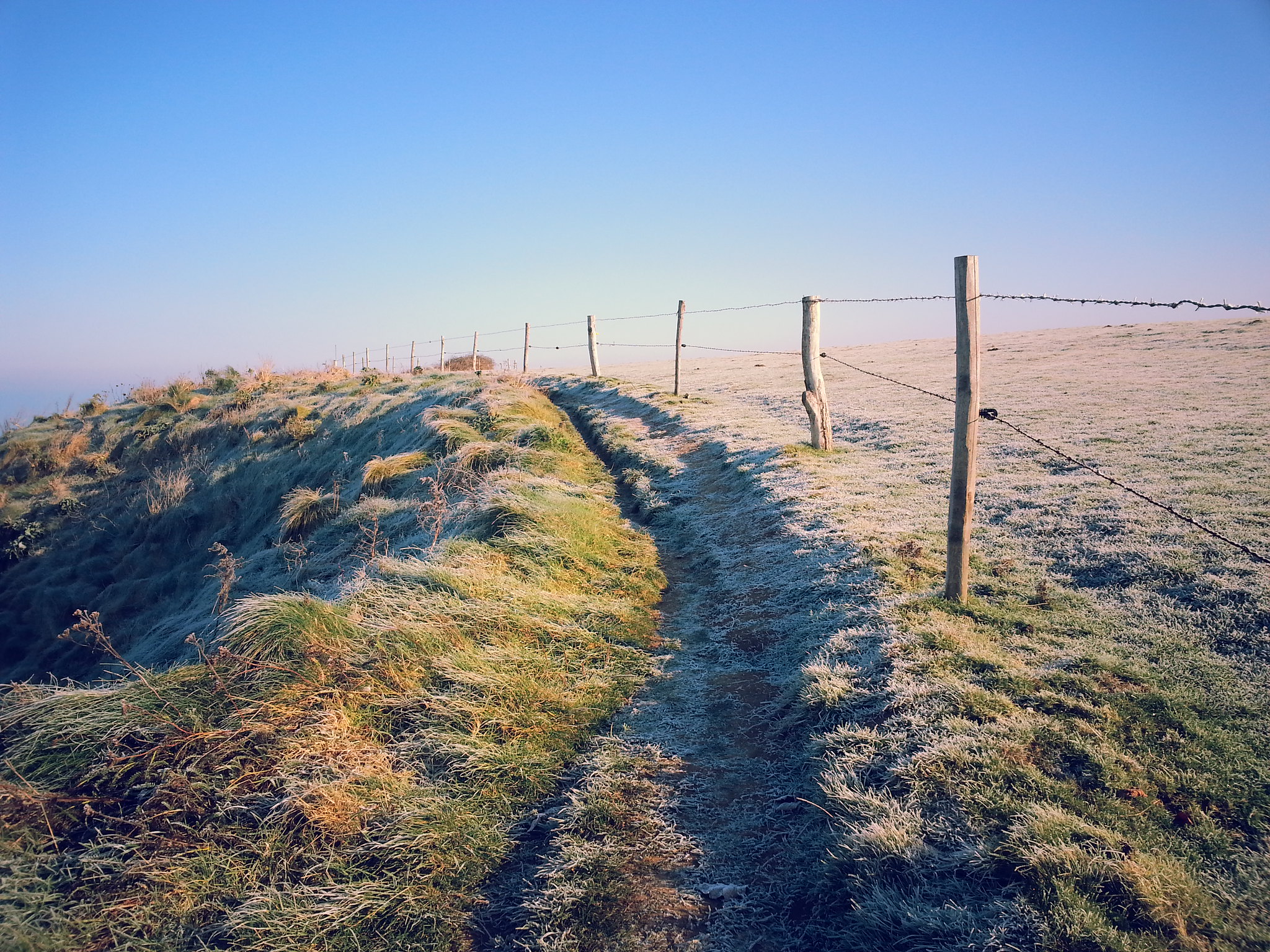 Hiking in the wintertime

Aside from that, there are a few sites you could check out in town. There’s the Maison Maurice Leblanc, a museum dedicated to the aforementioned writer of the detective Lupin series and is the former home of Leblanc himself. And one could also take a peek inside the château des Aygues, a small estate that was once a summer residence for Spanish royalty in the 19th century. I’ve personally never visited these sites, but I can imagine they’re worth a pop in!

It has been years since I last visited Étretat. After my previous job took me to another region in France, I never returned to Normandy, let alone the cliff-side town. However, I’ve constantly recommended it to my peers whenever they visit France and have some time to tour the Normandy region. Étretat may be remote to reach, but it’s also its isolated location which makes it the perfect retreat away from city life, to enjoy a day or two by the sea and in its natural beauty. Étretat is truly a gem, a must to see while in Normandy.

Thanks for reading, folks. Have a wonderful day! 🙂