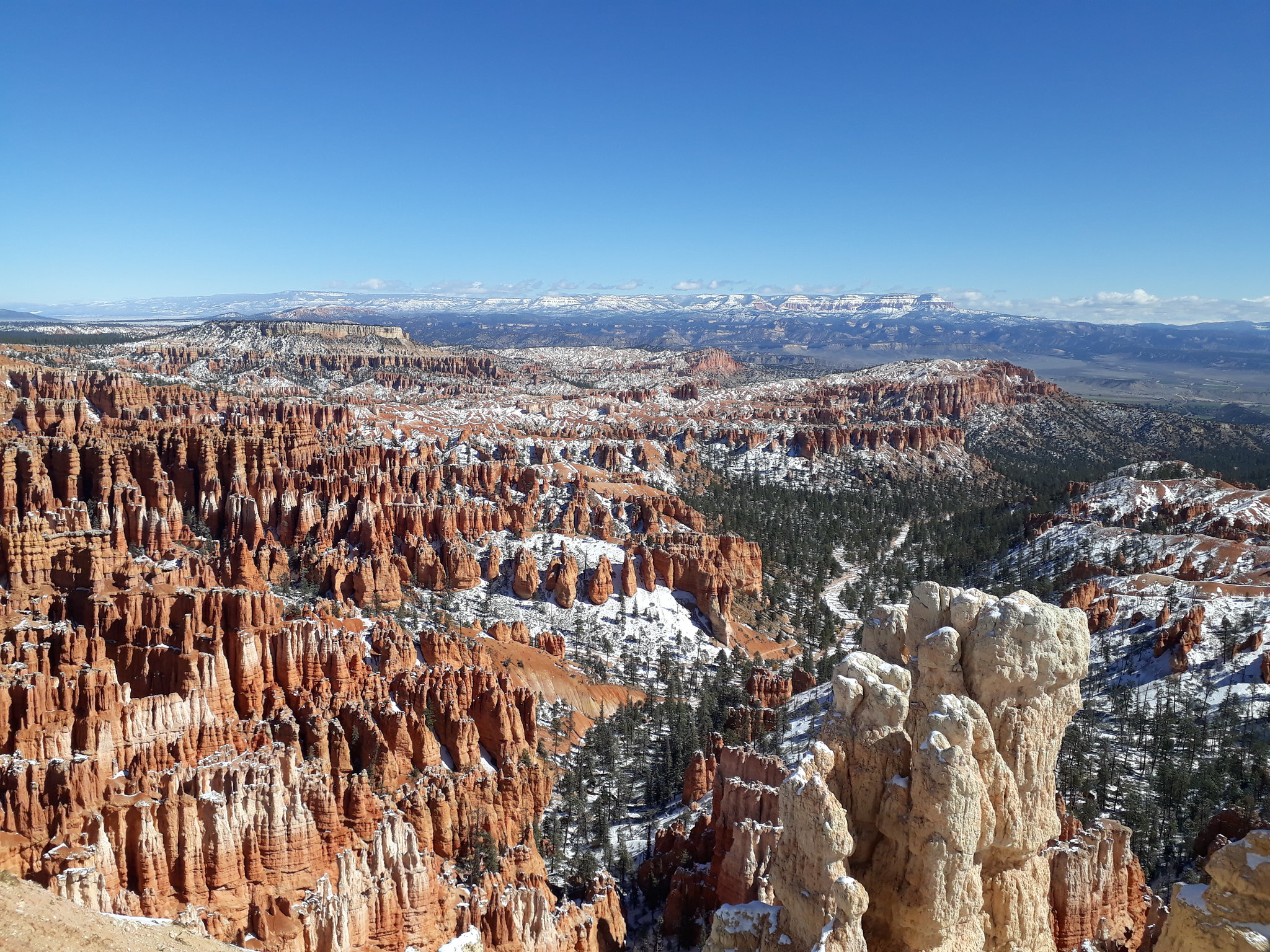 Home to acres of hypnotic hoodoos, Bryce Canyon is a striking national park that draws about 1.5 million visitors to its site each year. The land is distinctive in its natural formations, due to millions of years of weathering and erosion that has captured the memories of those who’ve come across it. Whether you choose to go for a day trip from Zion National Park or spend a few days there, Bryce Canyon is a must-see when visiting Utah.

I had actually gone to Bryce Canyon back in 2007, when I was still a kid. I went in the summer, and it was quite temperate at no more than 80°F/27°C. My recollection is a bit fuzzy, although I still have photos from my time there. That said, to visit 14 years later as an adult– as well as in snowy conditions– was a different and unique experience.

Bryce Canyon hadn’t actually been on our radar for our road trip this time around– instead, we’d hoped to go to Cedar Breaks National Monument, which is a “mini-version” of Bryce Canyon. Unfortunately, Cedar Breaks was closed off due to excessive snow, as it’s at a higher elevation than other national parks around it, so we had to forgo that while staying in Zion National Park. And while we could’ve used more of our time to explore Zion, we also wanted to optimize our time spent at more sites in Utah.

That said, we ended up choosing Bryce Canyon as a short day trip from Zion. It’s about 90 minutes to 2 hours by car, so we headed out around 9h00 first to enter Zion and take Highway 9 out of the park and towards Bryce. The drive over was incredibly scenic, with absolutely no snow compared to the previous day and crisp, fall foliage on the trees and the pristine, blue ponds and budding snow-capped mountains in the background. This was true fall in Utah, and I was all for it.

We had been concerned that Bryce Canyon would be closed off due to snow fall, as it was with Cedar Breaks. Thankfully, the snow fall in Bryce wasn’t so bad, at about six inches (15 cm) that would burn off later in the day (comparatively, Cedar Breaks was at a whopping 17 inches/48 cm!). The light snow made for a lovely, but manageable, winter wonderland as we paid the $35 USD fee to enter the park. 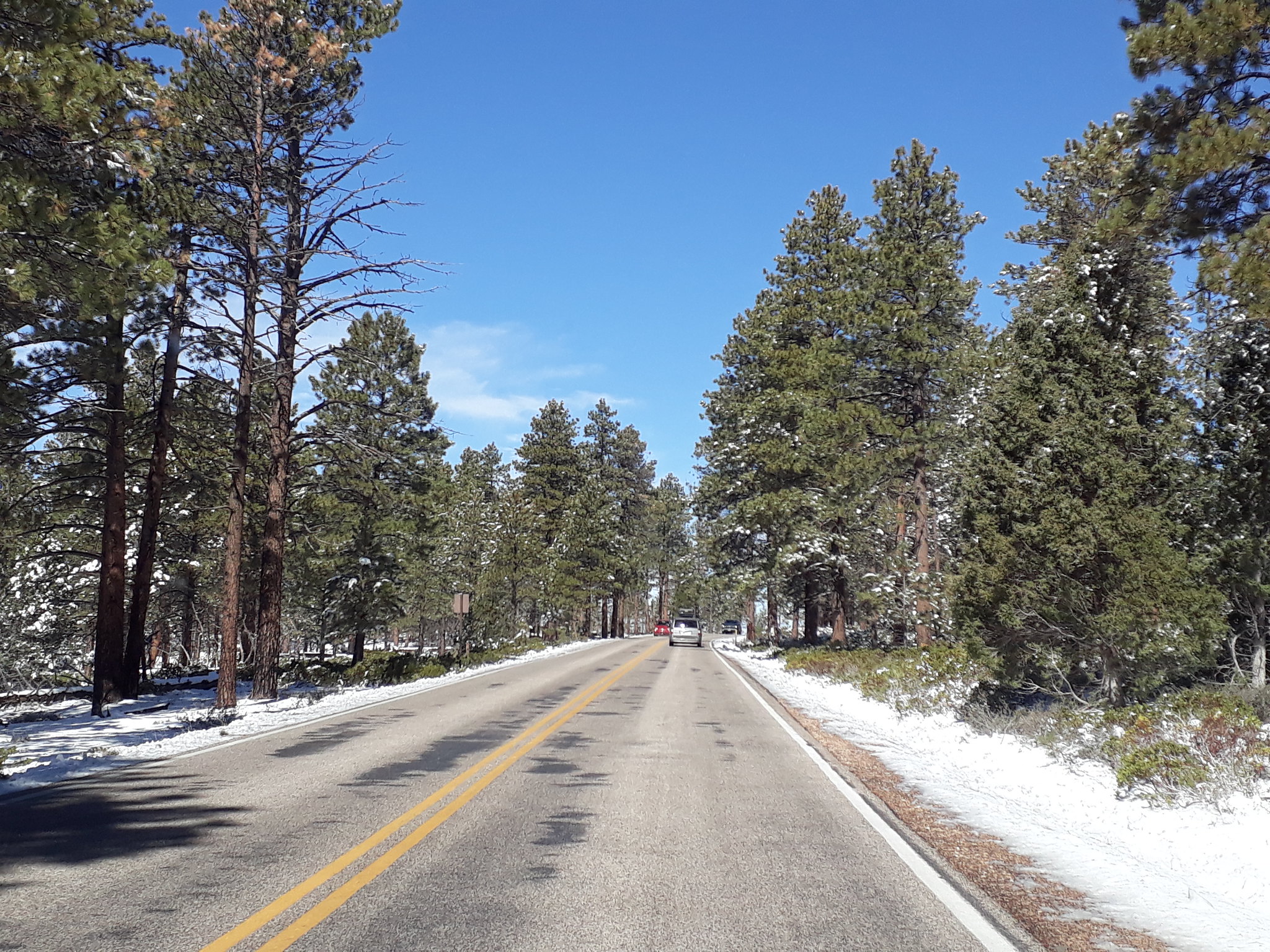 Snow alongside the road

Granted, a good part of Bryce Canyon was closed off due to more snow deeper inside, but the famous overlooks were open. As we didn’t plan to stay very long, we were fine just driving to the overlooks to admire the views, so after a brief bathroom break and souvenir stop at the visitor center, we attempted to head to the first overlook at Bryce Point.

Bryce Point was the deepest one in the park, as we found it best to go all the way through before turning around to check out the other viewpoints that were open that morning. Sadly, it’s also the most-popular, and we could not find parking at the lot– in fact, park rangers were forcing us to move out to prevent blocked traffic. We were informed to come back in 15 minutes to try again, so we headed out to a different overlook instead.

We managed to snag a spot at the less-crowded Paria View, which offered a closer view of the hoodoos. The lighting for photos wasn’t optimal, as the sun was facing behind the rock formations, but it was still a lovely sight to behold. The path to the viewpoint was snowy and icy, so we had to be careful not to slip on our way over! 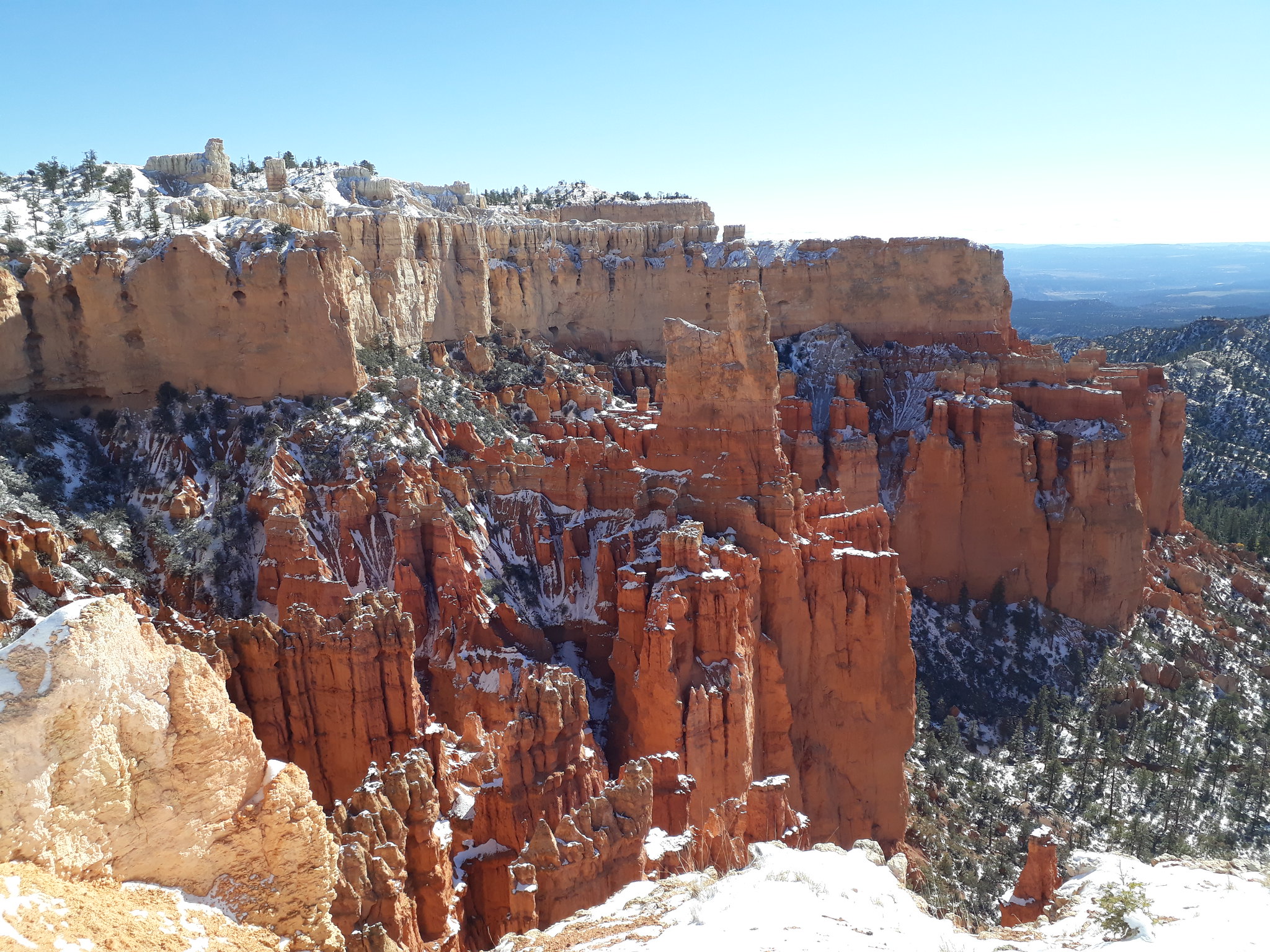 Our second attempt to park at Bryce Point was successful. My dad actually dropped me off first, as it’d appeared that there were still no parking spaces available, but after he circled around again, he managed to snag a spot just as another car was leaving– luck was on our side! This goes to show that parking at national parks are no joke, as they aren’t necessarily your definition of calm and peaceful!

It was another icy, but short walk over to the overlook, where we got expansive views of the gleaming hoodoos, which were lightly dusted with the soon-to-be winter’s snow. It was something out of a fairytale, and I truly found the views from Bryce Point absolutely magical. The views also brought back memories of visiting over 14 years ago, as I remembered that we definitely stopped at this viewpoint for photos– I can see why! 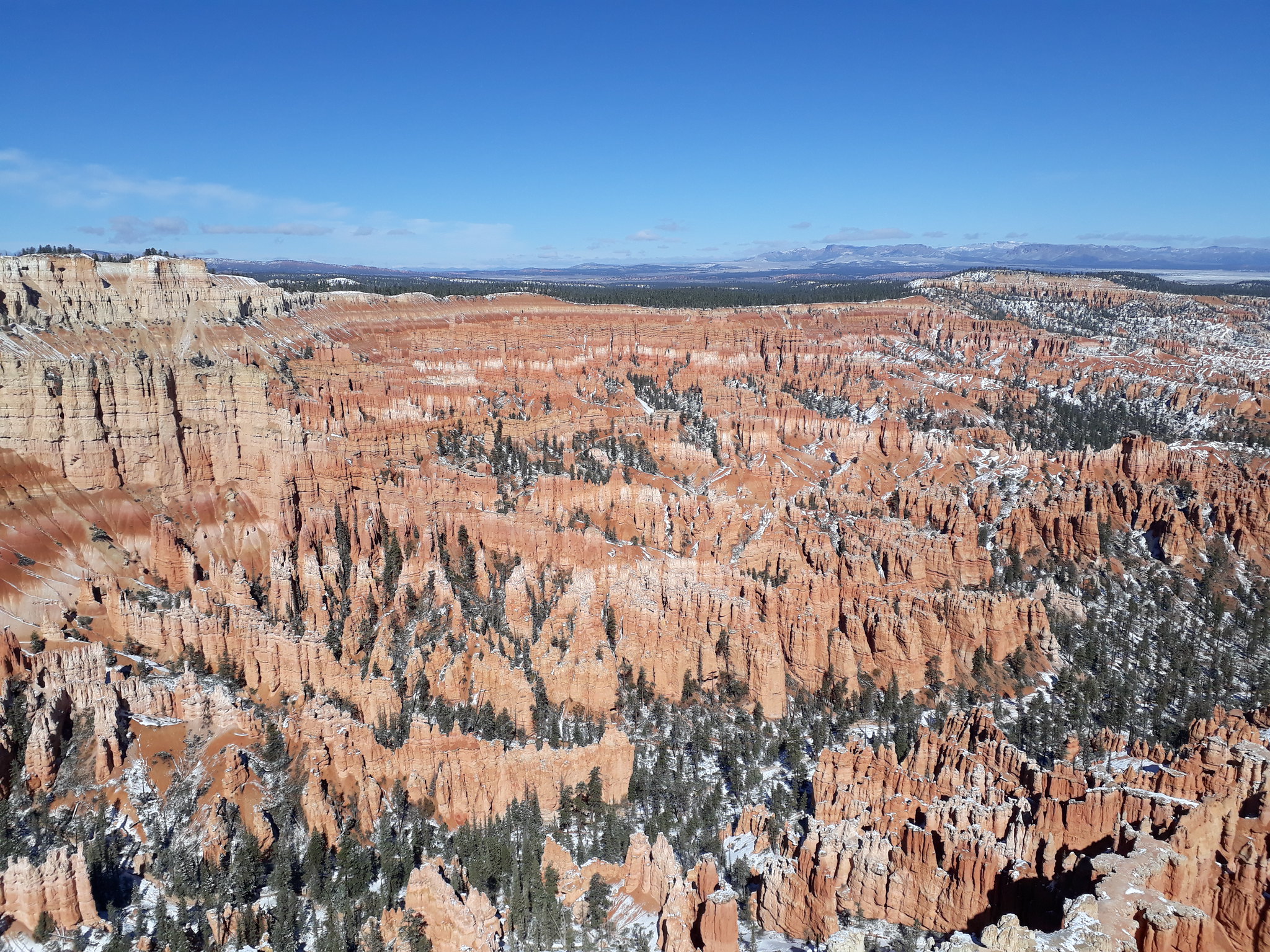 All of the hoodoos… 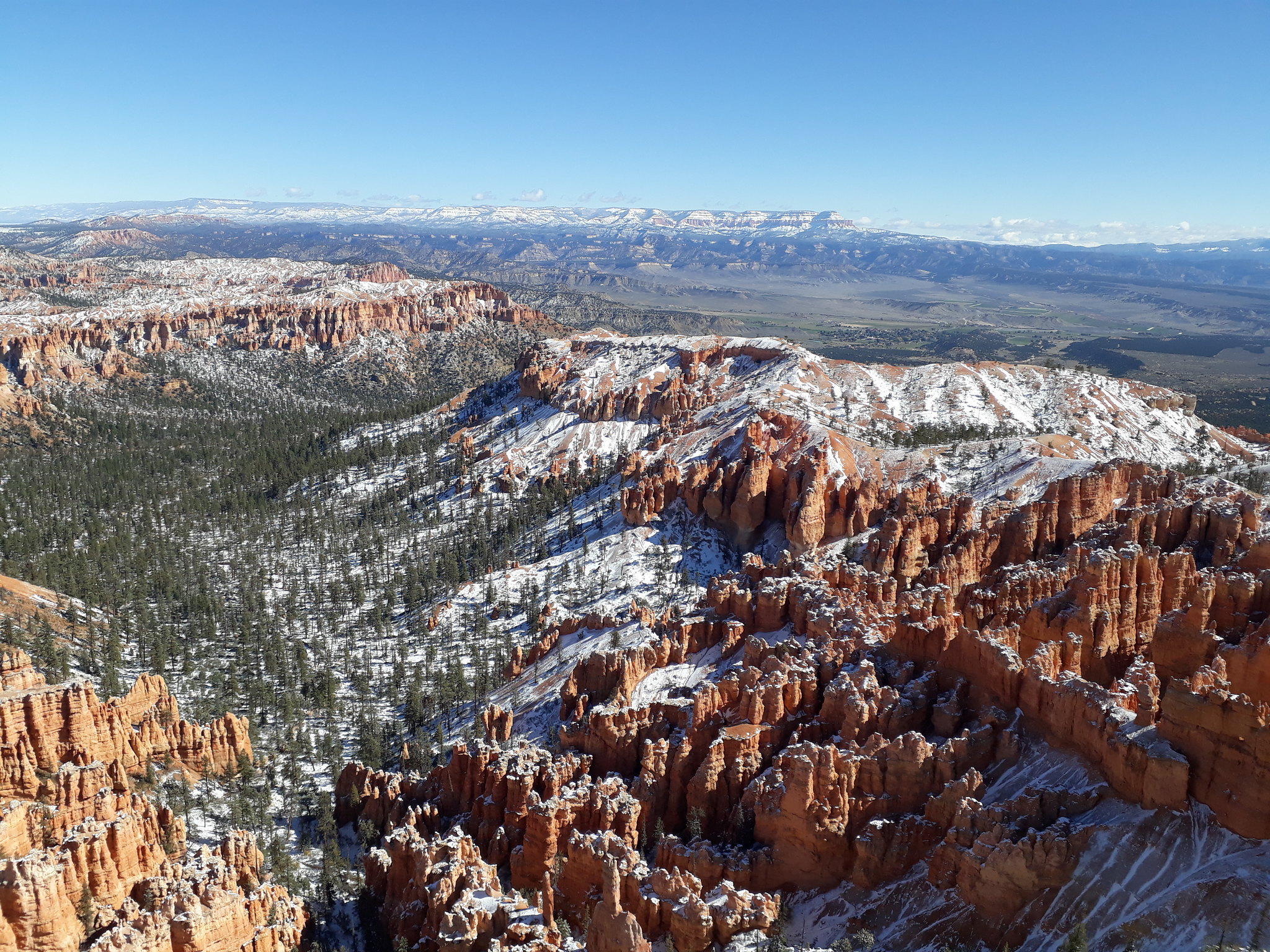 Our next (and final) stop was at Inspiration Point, which is higher in elevation, but also offered worthwhile views. The parking lot was actually a bit bigger than Bryce Point’s, and it wasn’t too hard to find a spot to park, as more cars were constantly coming in and out. The walk up to the viewpoint is longer and steeper (made even more so with the slippery snow), but the sights above were gorgeous. I definitely felt more of a workout here than at the other viewpoints we checked out! 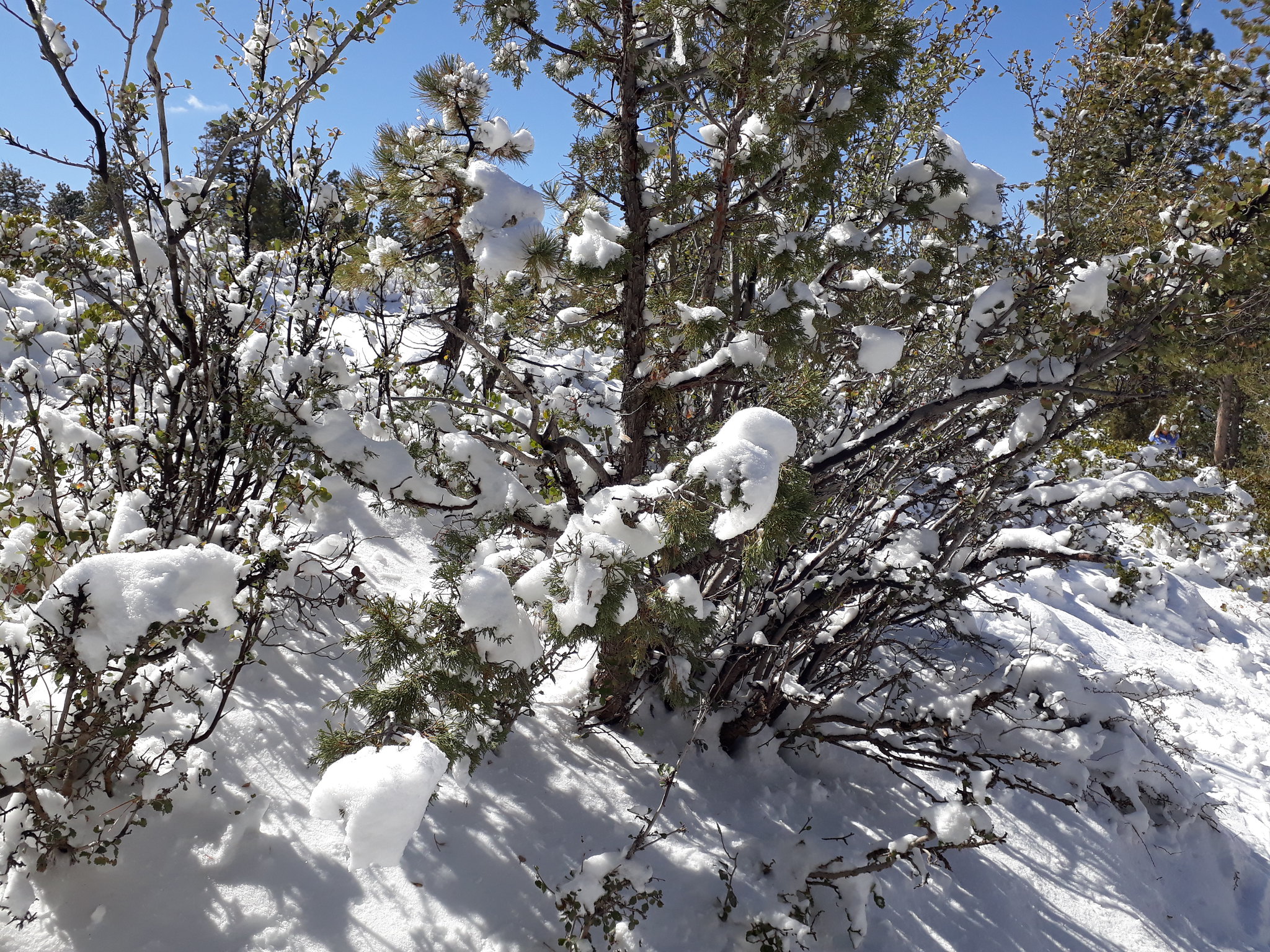 We had also tried to enter Sunset Point, but the traffic to get in was so backed up that we decided to forgo it– after all, we’d already seen three overlooks that looked more-or-less the same, so we didn’t expect Sunset Point to look any more different than the others. It was a matter of returning to the visitor center to park, eat our lunch in the car, and use the toilet facilities before returning to Zion around 13h00.

Although we only spent a couple of hours in Bryce, I actually enjoyed Bryce more than Zion. Yes, both are beautiful in their separate ways, but Bryce captured my attention more with its unique and brilliantly-colored hoodoos, which are iconic of the state of Utah. I may have frozen my butt off walking to the viewpoints there, but I have no regrets about our last-minute decision to revisit Bryce Canyon– it’s highly-recommended, should you ever visit Utah someday.

Thanks for reading. We’ll be leaving Utah and heading over to Nevada as we round off our road trip adventures. Look out for the next post soon!