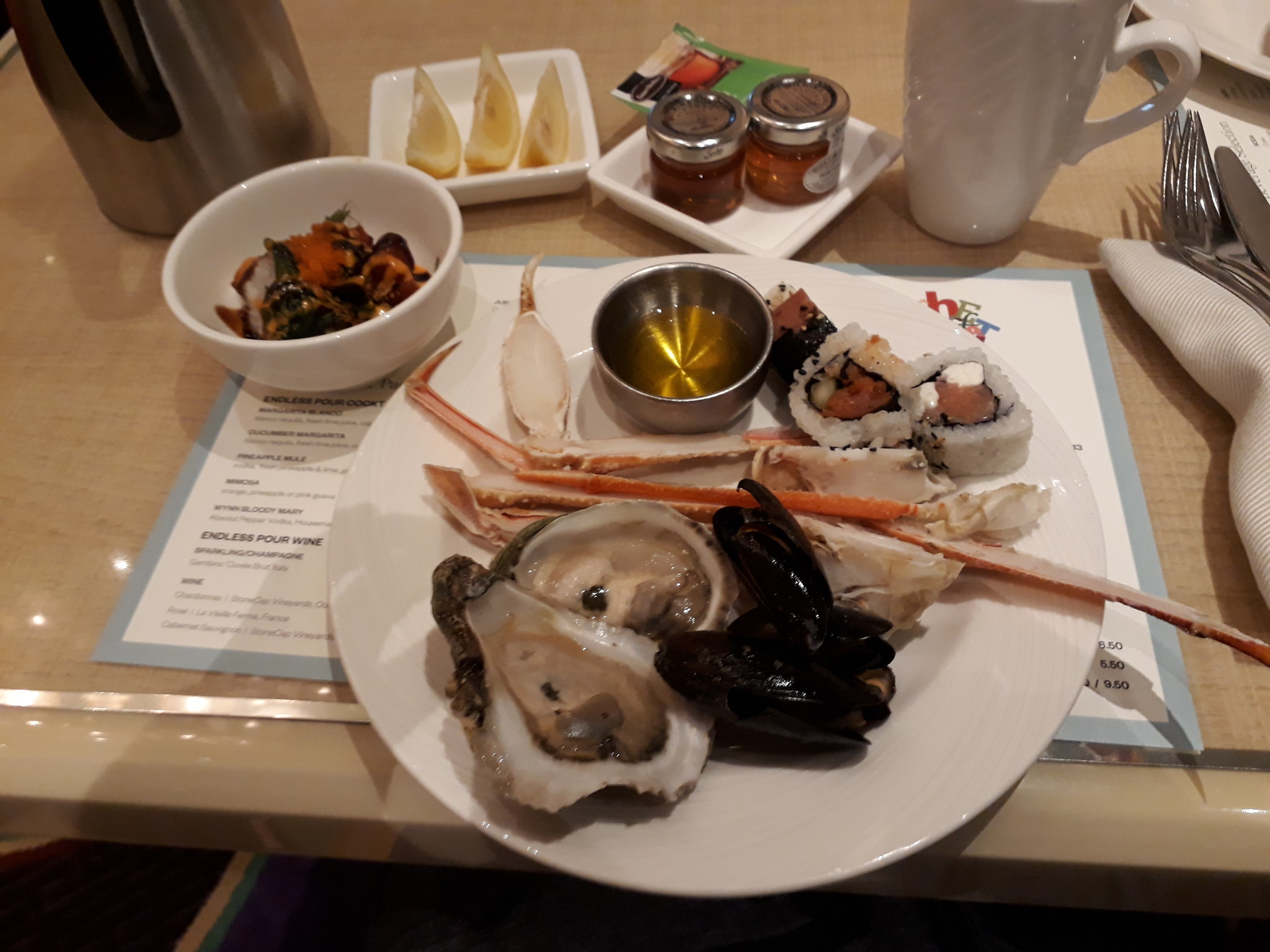 Seafood platter at The Buffet at Wynn (October 2021)

Besides exploring the city scene, we also spent our two nights in town checking out the food scene. Las Vegas is known for its casinos and nightlife, but it’s also known for having more restaurants per capita in the US (ranking at #4, just behind Los Angeles). From its world-famous buffets to all sorts of high-class restaurants (from celebrity chefs like Gordon Ramsey and Wolfgang Puck), Las Vegas is food heaven for any foodie to indulge in. Here are the places I checked out during my stay, with ratings to boot:

The Buffet at Wynn

Considering that I hadn’t been back to Sin City since 2011, I knew that I wanted to have a traditional Las Vegas buffet upon my return. I’d grown up going to the city every year or two as a kid, and I remembered trying the various buffets in town from Wynn‘s to Planet Hollywood‘s to Flamingo‘s. Although I’m not a big eater, I would do my best to eat my money’s worth, as such buffets don’t come cheap (think $40 USD as a starting price), before walking the Strip to burn all of those calories off.

I wanted to have one of the top-tier buffets, so I opted for Wynn‘s. I paid $65/person, which was a hefty one; I actually reserved a spot online for 15h00, on our first day of arriving into town. After working up an appetite walking on the Strip, we headed over to the buffet for our late lunch/early dinner.

The layout of the buffet was just as I’d remembered it over a decade ago, when I’d last went. However, I didn’t remember much of the food, but I did recall having crab legs and lobster, so I got those along with small samples of other items, including sushi, pasta, steak, gelato, etc. I was also impressed to see taco and ramen stations, where I got the respective dishes!

While the variety of food was solid, the quality was definitely a hit-or-miss. I found the steaks and fish to be dry, and the fried/crispy dishes (e.g. egg rolls, fries) to be just a tad soggy. The ramen I got was just plain awful, as it wasn’t even ramen noodles used and the broth was vaguely sour. The crab legs and lobsters also lacked any substantial meat, so they were a disappointment.

However, there were a few good selections. One of them was this mushroom ragu pasta, which was incredibly rich and creamy (I think it was cooked in wine). The quality was so good that I could imagine it being served at a high-end Italian restaurant! The shu mai was also fairly impressive, as it was juicy and chockful of large, plump shrimp. And the dragonfruit and lychee gelati as dessert blew me away: the former had a slight honey taste to it and the latter was bursting full of refreshing sweetness. Such dishes redeemed my time at the Wynn buffet. 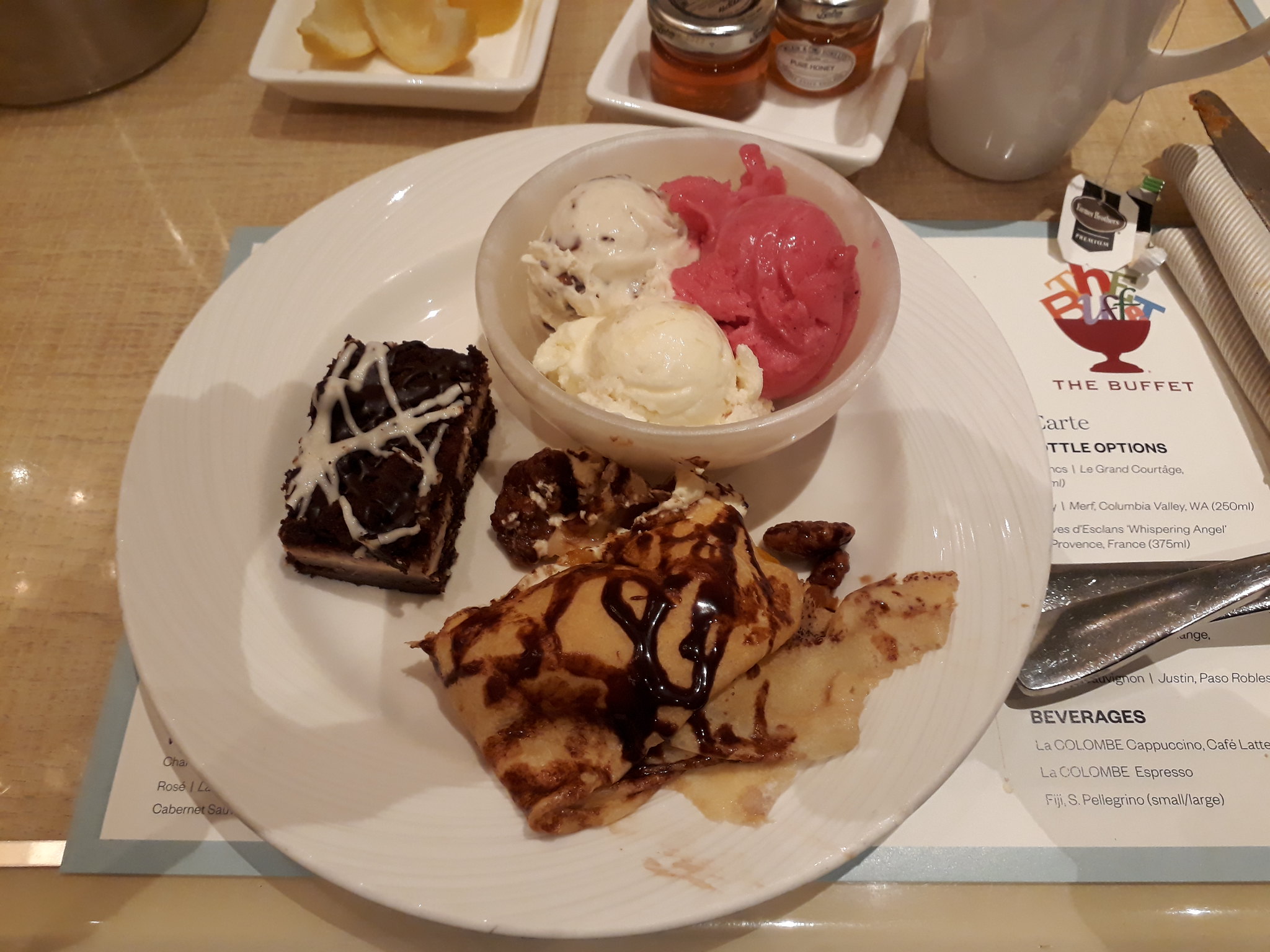 Overall rating: 6.5/10. Again, too many inconsistencies with quality of food, and to be honest, the dessert section was lacking. Definitely a place you go just for the experience, but I otherwise would not consider the $65/person to be worth it.

This restaurant is actually off the Strip, in Las Vegas Chinatown. It’s located on Spring Mountain Road, which is a long stretch of all sorts of Asian restaurants from Chinese to Korean to Thai to Vietnamese. It’s a foodie paradise for all things Asian and Asian cuisine.

What makes Big Dan such a gem is that it’s literally a hole-in-the-wall. In fact, it’s located inside of an Asian supermarket, so you just might miss it if you don’t look carefully. There are only six tables in the restaurant, and the place does fill up fast, so definitely get there before opening to snag a spot– my dad and I showed up right at 10h00, and within 30 minutes, four of the tables were already filled!

Big Dan serves Chinese food, but specifically from Xi’an, a city in central China. It’s known for hearty cuisine, from thick, wide noodles (called biang biang mian) to its use of lamb in stews and pastries. My dad and I ordered five dishes, two of which we took to-go: the ones we ate at the restaurant included special hot oil noodle with tomato and egg, lamb cumin burger, and pila bread in lamb soup. 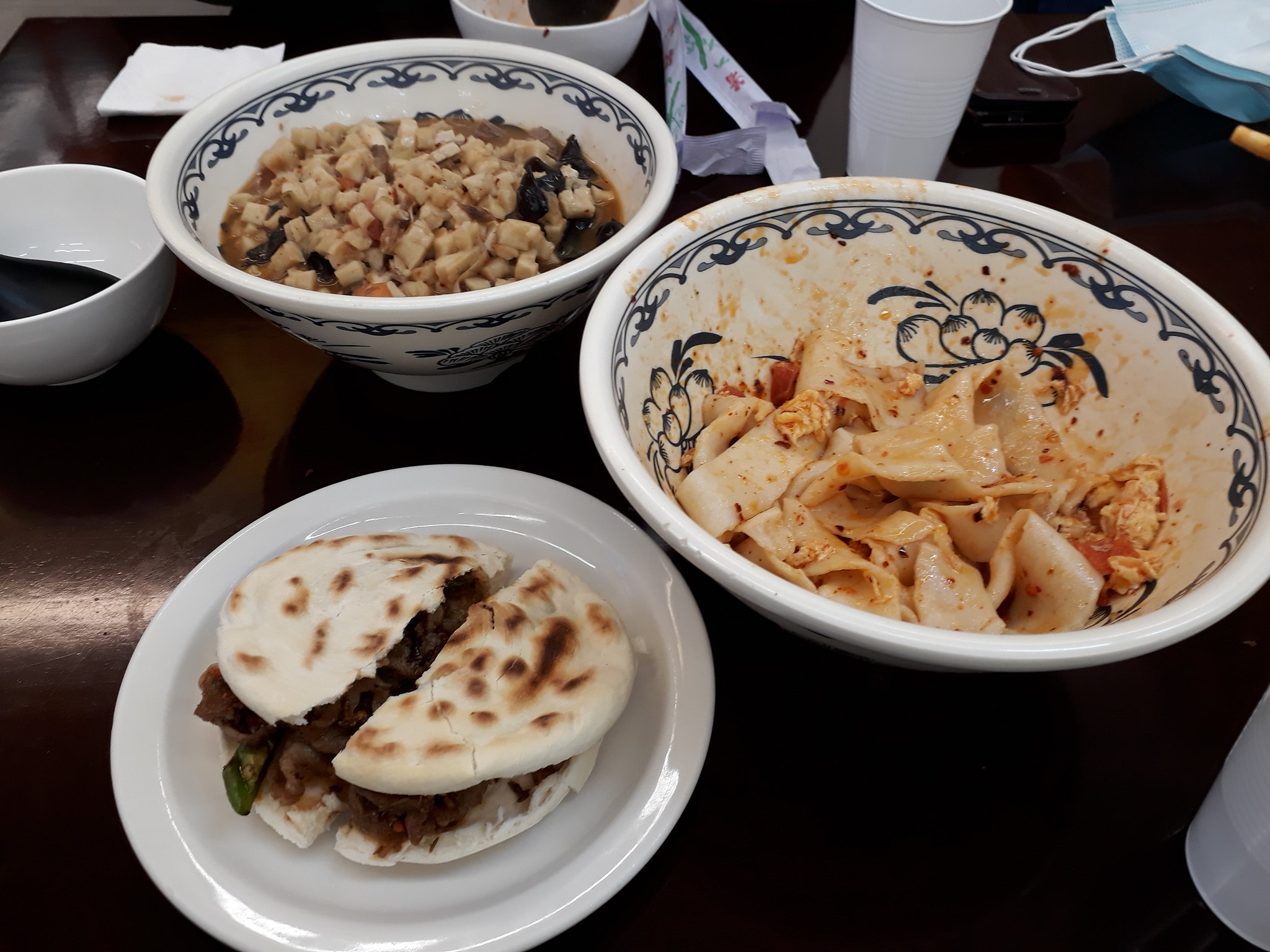 All were tasty, but my favorite had to be the pila bread in lamb soup: I’d never had anything quite like it, and I definitely didn’t recall ever having it when I visited Xi’an years ago. It’s essentially pila bread made into little cubes (which remind me of Turkish manti) and served in a viscous, slightly-spicy stew with generous amounts of gamey lamb and rice noodles (mifen). It was absolutely *chef’s kiss.* ❤

The two items we took to-go (and had for dinner later that day) were cold noodles (one regular, one sesame). However, they aren’t your typical noodles, as they’re specifically called liangpi and have a sour, almost fermented taste, which I also never had before. They were light and delicious, perhaps even better than the pila bread I had! 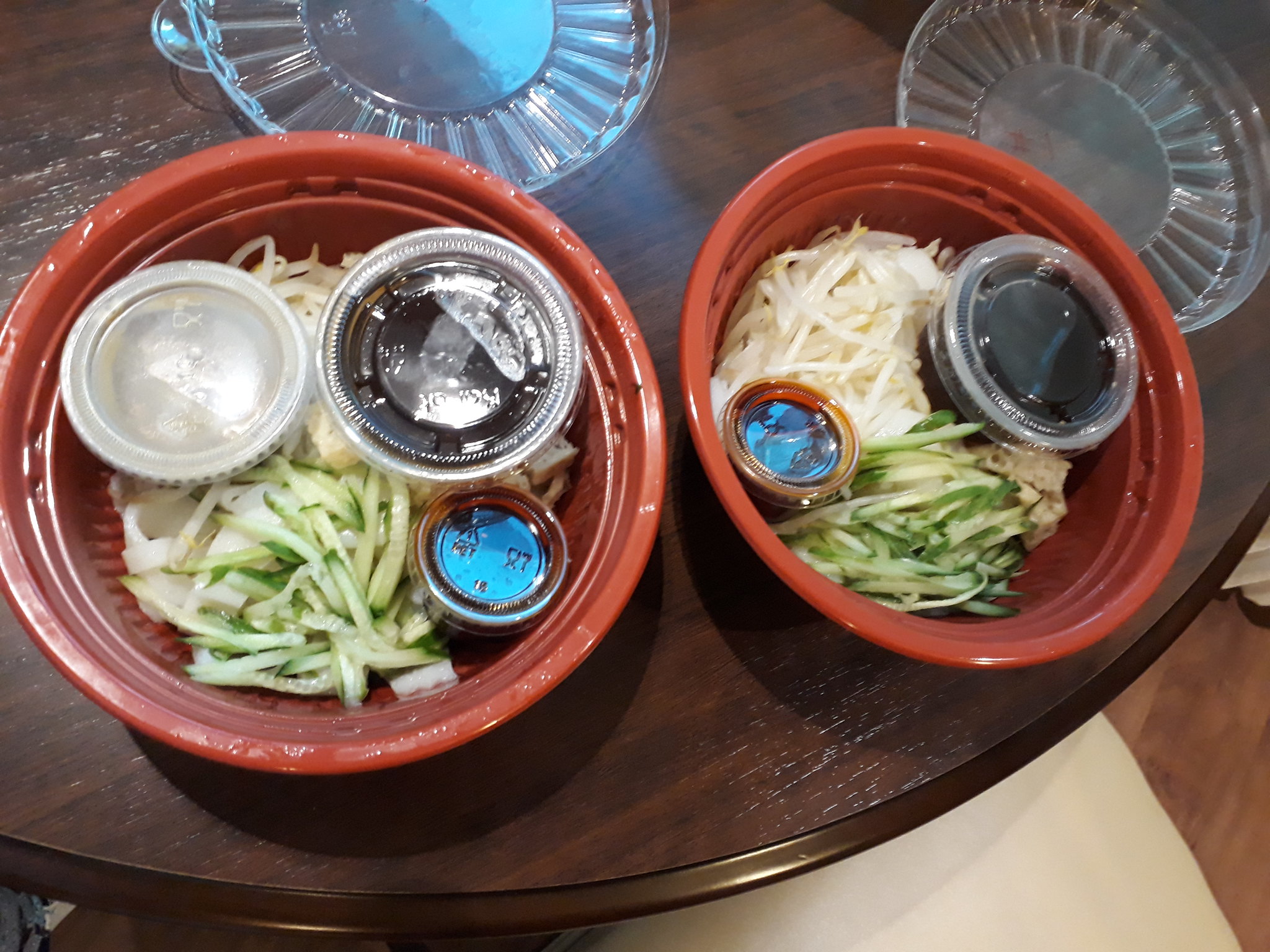 Overall rating: 10/10! If I could give it a 12/10, I would! Well-made food, all incredible, and worth the trip off the Strip to try out. Shout out to YouTuber Mike Chen for inspiring me to go here!

After Big Dan, we wanted some dessert before leaving Las Vegas Chinatown. A quick Yelp search offered Gäbi Coffee & Bakery, which was just a three-minute drive from Big Dan. This coffee-brunch spot is located inside a non-descript wooden door (i.e. there’s no sign to indicate the cafe’s name), in a large, warehouse-converted-cafe that’s decorated from floor to ceiling in a whismical, Alice-in-Wonderland type of fashion. It’s definitely a hipster, Instagrammable haven for Millennials to have brunch or coffee in.

The place was PACKED when we entered, and it took over 30 minutes just to get a slice of cake and coffee. The cafe was backed up with orders, so I could understand that it would take a while. However, for something as simple as a to-go order, you’d think that the cafe would separate dine-in and take out orders, but I guess it didn’t work like that. My regret was not ordering ahead online, but eventually we got our food and quickly left. 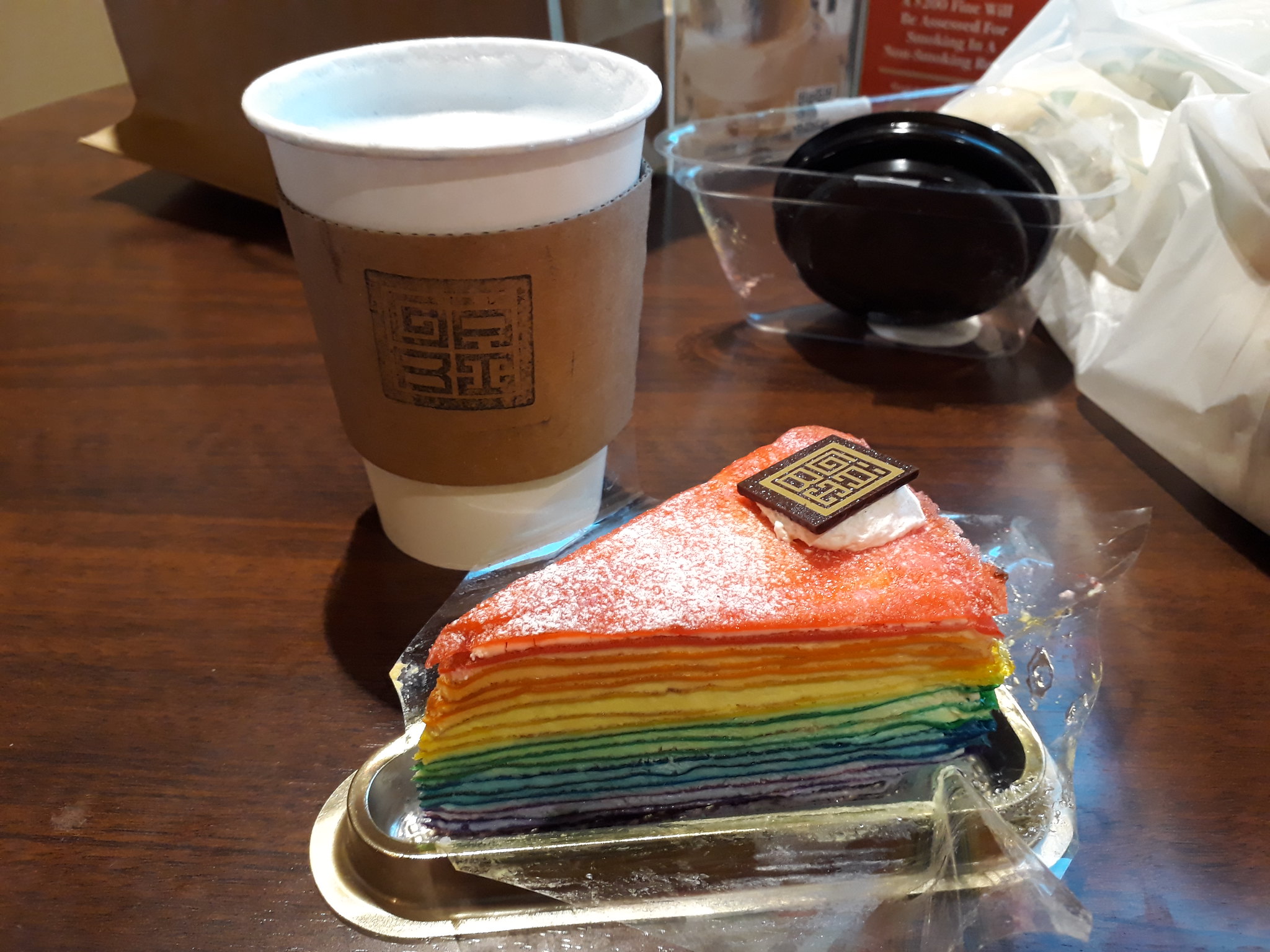 I got a rainbow crêpe cake and a butterfly latte. Both were beautifully presented, and I have to admit that the crêpe cake was pretty good: moist and soft, almost melt-in-your-mouth texture. The butterfly latte wasn’t really my thing, as it had banana flavor?? Not to say that I don’t like banana-flavored drinks, but butterfly lattes are traditionally made with butterfly pea plant, which has a floral taste to it. What was why I was confused with the banana flavor, which shouldn’t have belonged there at all.

Overall rating: 7/10. Beautiful cakes and food, beautiful cafe interior. However, it is expensive and service was painfully slow– even though it was rush hour, it should not have been that slow.

…and that’s it for my food review of Las Vegas! I don’t usually do food reviews on my blog, but considering that I checked out some unique spots in the city, I thought I’d give it a go. Although I had a disappointing experience at the Wynn buffet, I’d still give other buffets in Las Vegas a chance– I’m especially interested to try out the Bacchanal at Caesar’s Palace one of these days, as well as return to Las Vegas Chinatown to explore more of the food scene there.

Thanks for reading. Last post on my 2021 road trip is coming soon!