Cosmopolitan and futuristic, Shanghai (上海) is considered to be the pièce de résistance of present-day China. It’s shown off to the the world as a symbol of the country’s incredible strides in economic prosperity, and its international status has since placed it in the ranks of other world-renown cities like New York, London, and Singapore. No doubt, Shanghai is a prospering city, and it’s no wonder that locals and foreigners are flocking over to live in and experience it all.

Shanghai is home to the largest population in China, with over 25 million inhabitants living in the city alone. As I mentioned, it’s an expat haven, as plenty of British, American, even Japanese and Korean residents, live and work in the city. It’s also home to the top university for international students in China, with about 1 in 10 students coming from overseas.

The city also boasts plenty of Western restaurants, pubs, and entertainment to enjoy, as well as a higher level of English in locals compared to the rest of the country– should you find yourself struggling in Chinese, Shanghai is more-forgiving as locals will have a decent level of English, if not completely fluent.

Many of the locals themselves are affluent and educated, and it’s often not a surprise that plenty of them have gone overseas for work, school, and/or travel– they also may or may not be fashion trendsetters, as you’ll likely see them walking or driving downtown with cosmopolitan flair (e.g. Louis Vuitton, BMW, Gucci, etc.). This particular group in Shanghai are the very definition of “rich,” with a blend of old and new money coming in to make China the powerhouse it is today.

Visiting Shanghai was a very-different experience compared to our time in Beijing. I likened the difference between Shanghai and Beijing to that of New York City and Washington, DC in the US, respectively. Whereas the former was more of a cultural experience, the latter felt administrative. Not to say that one was better than the other, but I could definitely feel the contrast in atmosphere between the two biggest cities in China.

My family and I returned to China for a second time two years after our first trip back in 2009. I had just graduated high school and was just about to start college, and this week-long trip was a great break before I would be jumping into academics once more. Compared to our first trip, we would be seeing even more sights throughout the country, and Shanghai was our start and end point for the entire journey to come.

It was a long, 13 to 14-hour direct flight to Shanghai from Los Angeles. I wasn’t feeling very well, and thankfully, we landed relatively late in the day for us to be picked up to go to the hotel and crash upon reaching our room. We would only have one night in the city before we would continue on our way, but we would ultimately return to Shanghai for another night towards the tour’s end. That said, I wasn’t really in a rush to head out sightseeing– after all, it was good to rest!

We woke up early the next morning local time. I was feeling better after breakfast, and we decided to step outside for a quick look-around near our hotel, which was conveniently in the heart of the city. The summer smog hung heavily in the air, despite it being before 8:00. Pollution is no joke when in China, and the summer heat doesn’t help it in the slightest!

It was a matter of taking a short stroll along Nanjing Road, considered the world’s longest shopping district at about 3.4 miles (5.5 kilometres). It’s a popular tourist spot, and we took the time people-watching as locals went about their work day, as well as admiring the many big-brand name stores (e.g. ZARA, Adidas, etc.) along the way. This long, pedestrian shopping street reminds me of the Champs-Élysées in Paris, and overall it was nice stretching our legs a bit after a long flight the day before.

We met up with our tour guide later that morning, and we headed to the Yu Garden (豫園) within the Old City of Shanghai. The garden itself dates back to the 1550’s during the Ming Dynasty by a civil servant in honor of his father. It was a costly project (which ultimately bankrupted the creator) but since became one of the most-prestigious in the city. Today, it boasts a booming tourist center with many souvenir shops and eateries to enjoy in the historic buildings.

Our tour guide gave us free time to roam the garden’s quarters, so we set about wandering from shop to shop, where we marveled at the craftsmanship of items like decorated snuff bottles, handcrafted fans, and personalized-gold chopsticks. We ended up purchasing the chopsticks as souvenirs– even if we’ve never used them, we still treasure them to this day!

My family and I also strolled along the Nine-Turn Bridge (九曲桥), a bridge which, of course, has nine angles that zigzag over the garden’s pond. Unless you’re perched from a vantage point, it’s impossible to capture the entire nine turns, so this photo will have to do:

We also passed in front of the Nanxiang Bun Shop (南翔饅頭店), a famous eatery that dates back to 1900. Along with serving handmade xiao long bao (“soup dumplings”), it also serves the world-renown Nanxiang steamed bun, which requires a straw to drink the hot, meaty broth inside. There was a massive line when we were there, so we opted not to have them. The buns looked pretty good, though, even if somewhat overrated.

After having a quick lunch in the Yu Garden, we left Shanghai at midday to head to our next destination. It was a whirlwind of a week through various cities and villages in central-east China, and we had one final night in Shanghai upon returning to the city. We didn’t do much, except a visit to The Bund, a waterfront kind of boardwalk with views of the city skyline.

Shanghai is a major port city, with notable ties to the British during the Opium War, and its views of the water offer a somber glimpse into the city’s colonial past. The skyline is vaguely reminiscent of that in New York City, especially from the Hudson River. We took a boat ride that night along the Huangpu River, where we saw the skyscrapers light up for a dazzling end to our short visit of the city. 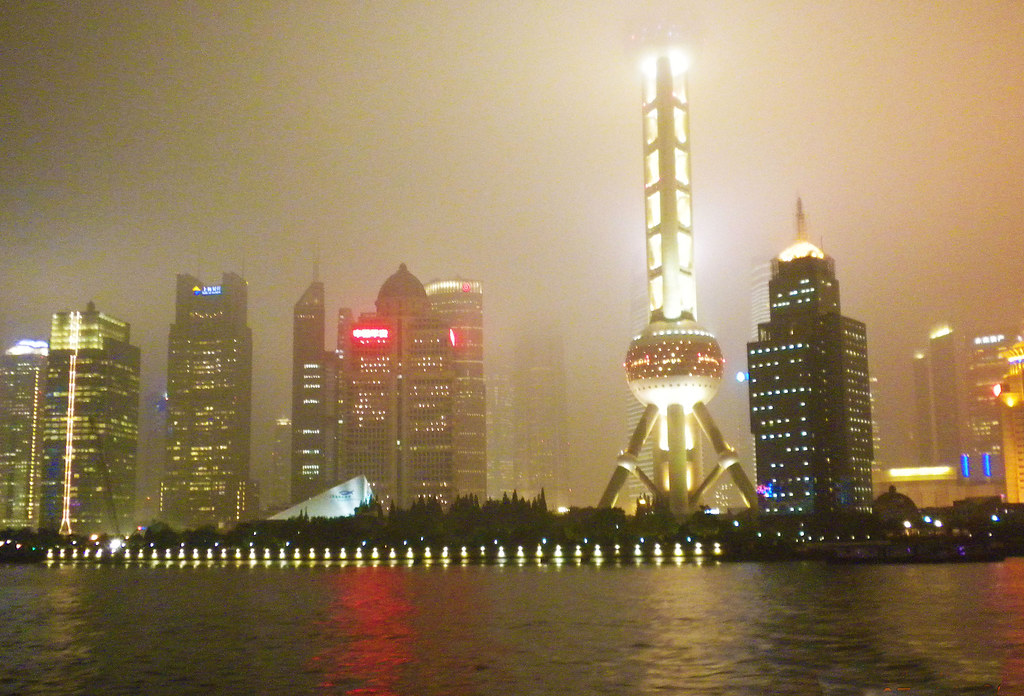 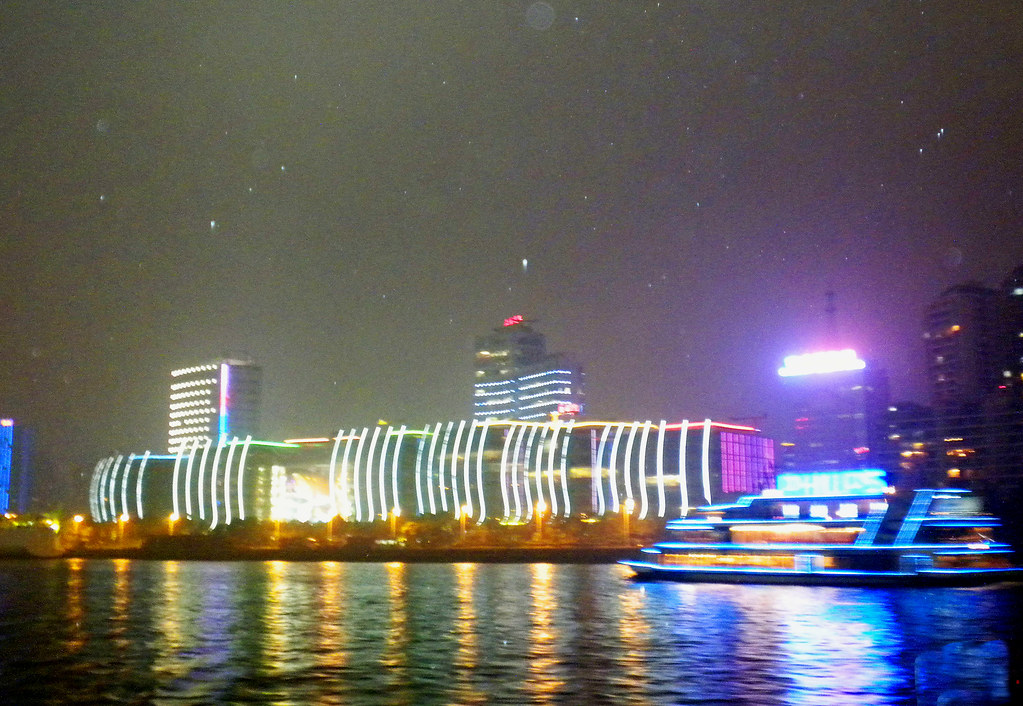 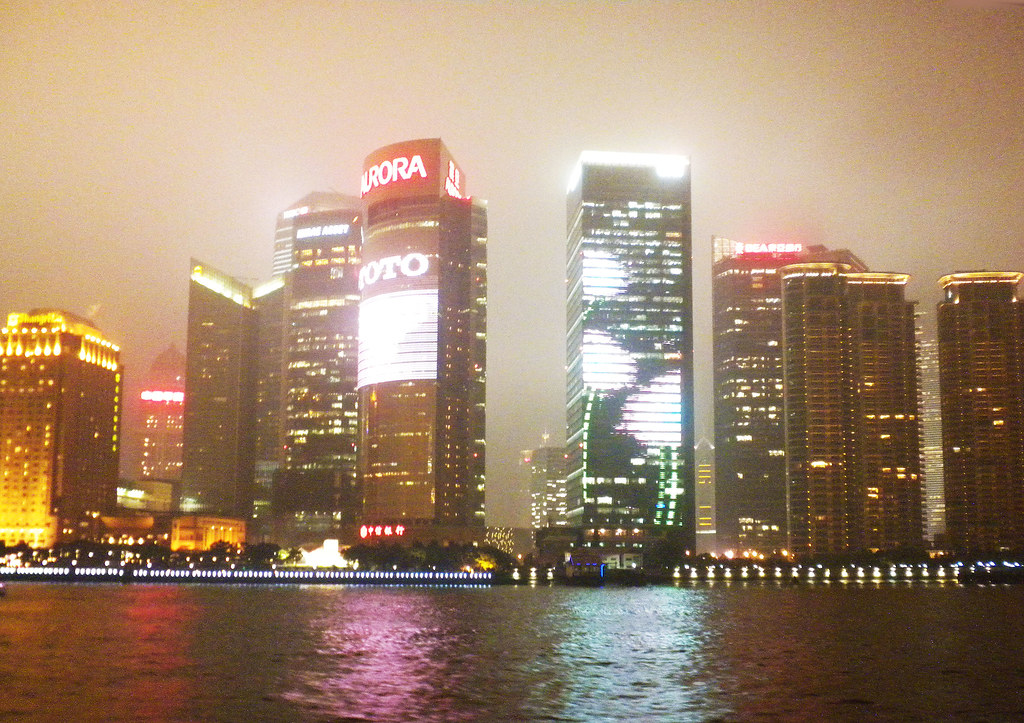 Our two nights in Shanghai were by no means enough to capture everything that’s to be seen in the city. We only got a few highlights, and it would’ve been great to stay an extra night or two to see more. All the same, it was a solid introduction to central-east China, and I would be keen on returning to explore more of it on my own.

More of this series to come soon!